Off to America, thank you dear uncle….

Johanna Carolina Hellsten was planning on traveling to USA and applied for a departure certificate from Sweden on 7 November 1867, right after her Uncle Manne Helsten said he would send the funds from her Uncle Eric to her Aunt Lovis when she was ready to travel. She then decided to delay her departure and returned her travel papers a week later, on 14 November.

By early November, the days are getting shorter as winter is approaching in Sweden and maybe Johanna thought that traveling in the spring might be a better idea.

Meanwhile, Uncle Eric is still awaiting Hannah’s (Johanna) arrival - he writes on 23 December 1867 to Carl and Hannah, it takes this letter at least a month to arrive in Sweden.  Then Carl writes back 3 weeks later saying that Hannah has delayed her trip.   Eric is patiently waiting in America for his niece, wondering where she is, maybe even concerned since he hasn't heard after getting the travel funds to her.  By the time Eric would find out her changed travel plans, it is probably close to March — about the time for her to actually come! 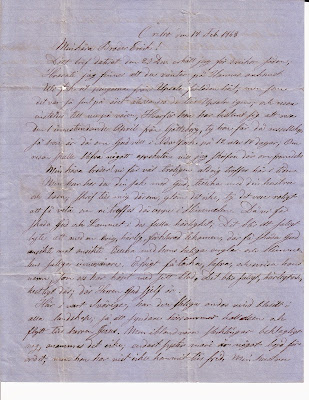 I received your letter dated 23 Dec 3 weeks ago in which I find you are awaiting Hannah’s arrival.  We received the money from Uppsala last fall.  But since it was so late in the year they were sent back to Upsala again and the trip was started in the spring.  Wherefore she has decided to leave the coming April from Götteborg because she will then have travel company.  So God willing she will be in New York in 12 or 14 days.  If the trip will be somewhat postponed I will write you about it.

My dear brother, we will probably not see each other in this time [on earth] but how do you stand with God as well as your wife and children?  Please write to me about it.  Don’t forget to because it would be nice to know if we will meet up there in heaven.  Then we will see God and the lamb in the full glory.   It will be a blessed switch to be with an eternal glorious transfigured body there be allowed to see God face to face together with his holy angels and the blessed inhabitants of heaven.  That eternally be allowed to thank, praise and say his name that brought us here with his blood.  It will be blessed and glorified and precious there where the Lord God himself is. 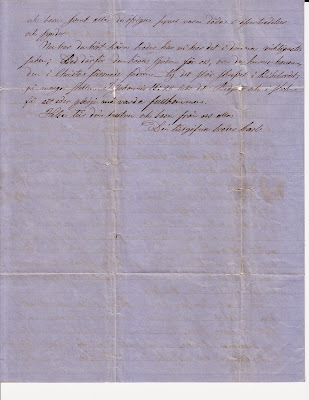 Here in our Sweden the wind of the holy ghost has blown in all the counties so that many sinners have listened to the call and fled to the Lord Jesus.  But among our relatives has it unfortunately not been received. Only sister Marie has some inclination but she has not at all come to peace.  My wife and children and all the others seem to be dead in transgressions and sins.  Now you have heard dear brother how we have it in this most important matter; therefore please pray to the dear God for us if  you know Him the Christ reconciled Father -- because it is written in the Bible word in many places in John 16:24 it says “ask ye shall receive and  your joy shall be full.”

Greetings to your wife and children from us all.

Not sure who her traveling company was, but Caroline Hellsten is listed on a passenger list arriving in New York City on 22 April 1868.

Notice her father Carl wrote of a 12 or 14 day trip.  The transatlantic sailing trips when Eric came in 1845 and his wife Mary in 1848, took about 43 days.  The addition of steam ships definitely made the trip much faster, and most likely, safer.

Spring 1868, Eric was waiting for her Hannah.    He contacted the immigration folks alerting them of her pending arrival. 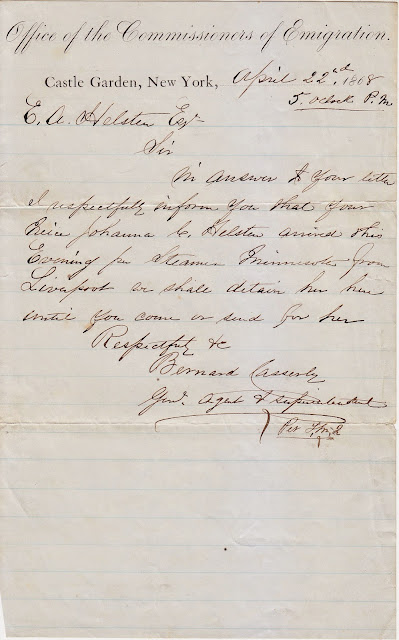 E.A.Helsten Esq
Sir
In answer to your letter
I respectfully inform you that your
niece Johanna C. Helsten arrived this
Evening pm Steamer Minnesota from
Liverpool we shall detain her here
until you come or send for her

You might recall that Hannah had written her uncle:

I, as a big, strong, healthy seventeen  year old girl, used to brewing, commerce, and rough work and who longs for work in an unknown country where no one finds fault with one’s honest work or despises the virtuous for his poverty.
This in addition to the fact that many of my acquaintances have already left for, the employer America, which is why I, too, this fall intend to go there, if some noble person would help me with travel money and good advice at the arrival.

Since I have heard that Uncle is rich and happy in the country to which many long to go, I now set my hopes and prayers to Uncle for a kind answer to:

Could my dear Uncle please be so kind as to via a postal order to Upsala or a letter give, or, if need be, loan me 200 Kr for travel money?

Could my Uncle have use for, or know somebody, me as hired help for anything?

Could Uncle extend a helping and protecting hand to me at my arrival and until I have a position?

Does Uncle believe that a poor, but swift and untiring, girl can in an honest way earn a meager living through the work of her hands?
…


Well, dear uncle has provided passage to America as requested.

Dear uncle has “extended a protecting hand” upon her arrival.

Does dear uncle find a job for her?

Lovis writes to Eric, 19 December 1868:
Thousands of thank yous for your dear letter that we received on May 19 and all goodness you proved Hannah in many different ways.  I would be a joy if Hannah always remembered this and is thankful towards you.  The gold ring was lost was sad they have not found it[.]  ... My man with me joins in hearty greetings to you yours and Hannah

Sounds like Eric provided not only for transportation all the way to Gaylordsville, Connecticut from Örebro, Sweden but also helped her find a job nearby.

Hannah goes to work for the Bostwick family in New Milford. Gaylordsville is part of New Milford, so it could be a couple miles away or next door.
In the 1870 US Census for New Milford, “Johanna Helston" age 20 is listed as a domestic servant.

This might not have been the kind of work that she was used to at home when she described herself as “used to brewing, commerce, and rough work.”
She probably has plenty of opportunity to "earn a meager living thru the work of her hands" working as a domestic servant.  She has agreed to work for the Bostwicks for two years.

So, did Johanna live happily ever after in America as she dreamed?
Stay tuned!

©2015, Erica Dakin Voolich
The link to this post is http://genea-adventures.blogspot.com/2015/05/off-to-america-thank-you-dear-uncle.html