They Might Have Arrived on an Alien Space Ship, But They Owned Land in 1656 -- However, What Was the Date?

When I discovered that FamilySearch.org had the Massachusetts Land Office Records found in  County Courthouses throughout Massachusetts, 1620-1986 available online, I wanted to look for my Thomas Dakin/Dakeynes/Dacon who was one of the persons who got "first division lands" in Concord [now part of Sudbury], after he was dropped off by an alien space ship [for some reason he hasn't been found on any of the ship manifests before the 1650s when he was in Concord getting first and second division lands.]


The actual records aren't searchable, however, the above entry in the Grantee Index clearly shows where to look for the actual record for Thomas Dakeynes: volume 2, page 105.  The Grantor Index gives the same information, ironically Thomas Dakeynes is both the grantor and grantee in these indexes.   FamilySearch.org very nicely not only uploaded the index but they uploaded the books too.  So going to volume 2, page 105 produced the deed referenced here.

The Dakin deed is the one on the lower right corner of the above pages, shown below:

Thomas Dakeynes/Dakin/Dacon, husbandman, and his wife Sarah sold land, that they previously bought from widow Elizabeth Barrow, to John Hayward who signed an indenture (agreement) dated 9th day 11th month 1656.  The index gives a date almost three years later in 1659.  Looking closely at the deed, it clearly shows both in the text of the deed that it was the "9th day, 11th month 1656" and in the notation in the margin: "9.11.1656"
I have not transcribed the deed [very hard to read, will work on that later] but it looks like there is another sale of this land to Samuel and Josiah Dillard on 14th of 2nd month 1658.

So where did the date of 12 August 1659 come from?  It appears that was the date that they recorded the deed in the county of Middlesex.  If you look at both this deed and the one above it, the person who  recorded the deed was Thos Danforth.  The deed on top was agreed to 22 April 1657, but entered and recorded in 1659, by Thomas Danforth.

Since they lived in Concord which is part of Middlesex County, the county seat of Middlesex (now and then) is Cambridge -- probably about 16 miles away.  Historically, looking at Newberry Library's historic county maps, Concord was in Middlesex County which was established in 1643 as one of the original Massachusetts counties.  People did not live near the county office, in this case it is about 16 miles away on modern roads (then, not by modern highways with easily driven cars) -- long walk or horseback ride.  Maybe they didn't see a need to record it until it there was yet another sale of the land.  Maybe everyone involved went to Cambridge and recorded it 12 August 1659.

Another question would be: when was the index created?
This index goes from 1639 to 1799.  Was it created in 1800 or in some year long after that?  My reason for asking this question has to do with the change from the Julian to Gregorian Calendar in many Protestant countries (including England and its colonies) in 1752.  In the Julian Calendar New Year's Day was not the first of January.  Instead New Years Day was the 25th of March:  Annunciation Day (nine months prior to Christmas in the Christian churches, the day that Angel Gabriel told the Virgin Mary about her new upcoming role as the mother of Jesus).  With the adoption of the Gregorian Calendar, the 1st of January became New Years Day.

Looking closely at the recording date by Thos Danforth:

In the Julian Calendar, 8th month would be October, and if I read this correctly, then the date should be 12 October 1659.

If the person creating the grantor and grantee index which goes through 1799, was thinking of the difference between the calendars of 1659 and their current year, would the date have been recorded as 12 October instead of 12 August 1659?

I can't get into the mind of the person with the wonderful handwriting who created the index.  But it would be nice to be able to ask that question!  [Personally I wish that Danforth who entered and recorded the deed had equally as good handwriting!]

If you want more information on the change between the Julian and Gregorian calendars --- the why, how and when--- check out The 1752 Calendar Change on the Connecticut State Library website.   Since the Protestant countries switched many years after the Catholic Countries, there was an adjustment needed which involved eliminating 11 days in 1752.  The Connecticut Library site points out as examples of what happened with the change:

Usually I write about my adventures researching my own family.  Today I'm making an exception and instead writing about seeking out my husband's family  who came from two islands in the Adriatic:  Vis and Brac, Croatia.  I want to apologize for not putting a "v" over a bunch of z's and "c's, and getting the  ´ to end up on top of the letter "c" instead of next to it -- I don't yet know how to do it!

His relatives welcomed us with "opened arms" and were wonderful.  I will not name them because I do not publish the names of living people without their permission. 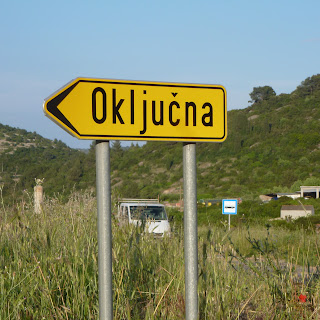 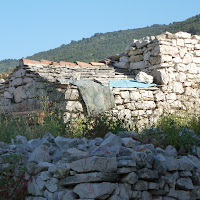 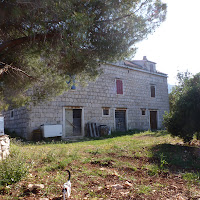 We stayed and visited in Split with my mother-in-law's cousins.  On the 3rd day we took a ferry to Vis where my husband's maternal grandparents were all born.  The husband of one of his second cousins accompanied us to Vis and was an amazing guide to Okljucna, the semi-abandonded village where the Bozanic family lived and his grandparents migrated from.  No one lives there now, but our "tour guide" could tell us who had lived in each house.  I say semi-abandoned because there are members of the younger generation trying to restore some homes enough for weekend living --- including the Bozanic three-family. 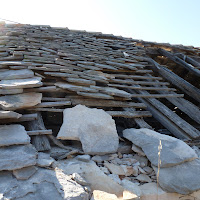 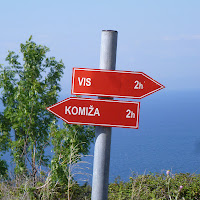 It is easy to see why folks have moved away from this scenic village -- no running water or wells -- just cisterns.  Electricity has just recently come to the area and the "improved" roads are very rough.  Now you can drive around, but the car scrapped bottom as we slowly went in, around and out 13 km.  When my mother-in-law visited in 1991 she went in by donkey.  The only street sign at the one crossroads, gives two towns, each "2h" [two hours] away by foot.  The modern sign has replaced the old hand-lettered one my husband saw in his past trip.  Any time they had to sell fish, for example, it was carried to Komiza or Vis on their backs or heads.  They raised olives and grapes. Not an easy life.

We visited the tiny church.  There are people in the village of Vis who care for it. 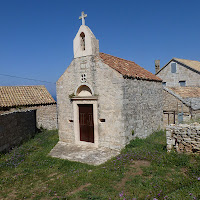 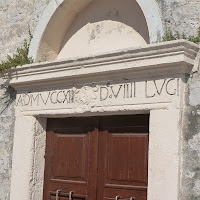 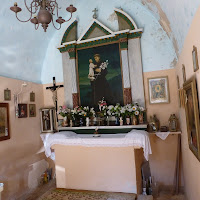 The inside is so small that there is only one small bench with a kneeler is on each side of the room along the walls.  We noticed pictures of and a statue of St. Anthony, and immediately my husband and our guide started reciting the poem:
"St. Anthony, St. Anthony, please come around.  Something's lost and can't be found" -- each in his own language.
I added: it's appropriately named since they have lost all of their congregation and some people definitely need to be found!

The surrounding buildings at the church are in a state of disrepair but till have some interesting things to see. 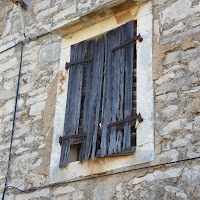 We spent time with relatives on Vis (the island) who now live in Komiza and Vis (the town) -- such hard working generous people -- even had a chance to share stories and my math books with one who teaches the same age students as I did (but then at the end of the school day joins his wife and father in their vineyard or olive grove).

We next took the ferry to Brac, this time our "tour guide" was another second cousin's husband.  On our way to Splitska, were my husband's father was born, we stopped to visit relatives in Dracevica, a small town of 80 (down from 500).  Again we were welcomed with open arms, a great meal and stories.  The town around them is partially abandoned [St. Anthony are you listening?] but they have updated and expanded their house.  They too are working multiple jobs, including a vineyard and running a general store.  I was able to share my math books with a first year high school teacher of engineering.

They took me on a tour of the downtown which included these plaques. 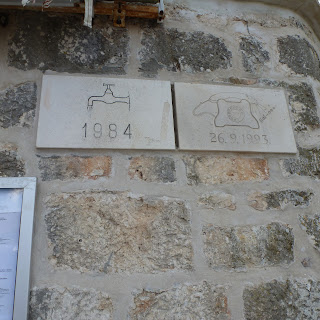 This explains why my mother-in-law didn't know how to contact relatives on the island on my husband's first trip in the mid-1990s -- she hadn't gotten the news that telephones had come to the island of Brac.    They also showed me the old horse-driven olive presses.


We walked around, chatted with neighbors, saw the closed neighborhood school, their abandoned stone outhouse and their still operating stone oven.  My husband's family story is that on Vis, when they used the outhouse they only had flat stones to wipe themselves afterwards (I didn't ask whether that was true on Brac).
We could see the evidence of the where the wildfires burned the distant mountain and then came right up next to their home [firemen were pumping water on it to save it], three years ago.

We visited the Brac Museum in Skrip -- it is in a building that dates to Roman times and is next to our "tour guide's" ancestral family castle, also from Roman times.  We saw the family store and the little church with a pine tree growing out of the roof in Nerezisca. 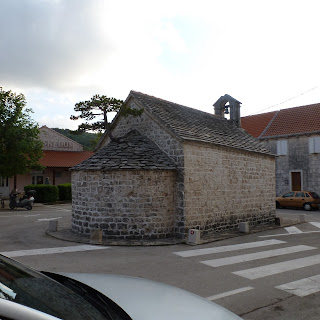 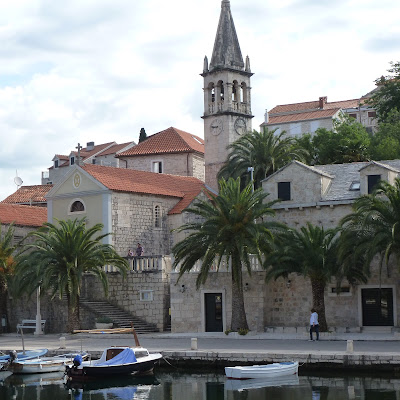 We were welcomed to Splitska by even more relatives -- who had stories to tell, a place to stay, and another tour guide who took us to Vidova Gora -- highest point on Brac at 778 m -- with a beautiful panorama view, including Vis on a clear day.

She took us to see the Vulic and Drpic houses where my father-in-law was born and lived until he immigrated to the US as a young boy. 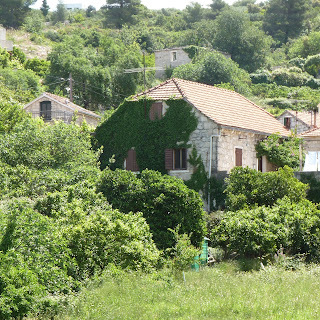 I marveled at the irregular tessellation her husband designed, cut and laid on their porch. 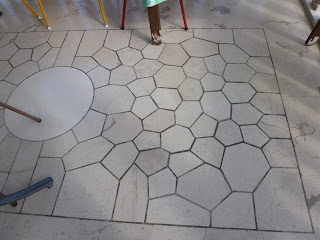 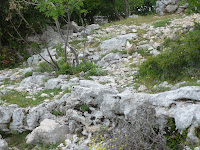 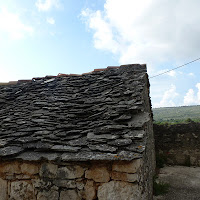 Both islands, Vis and Brac, are incredibly rocky.  It is hard to imagine that anything can grow with stones everywhere:  on the ground, stone walls, houses, roofs of houses, large piles.  In fact, vineyards and olive groves usually are surrounded by stone walls and often have piles of stones between the trees. 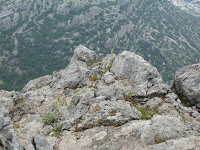 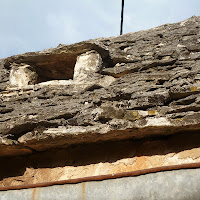 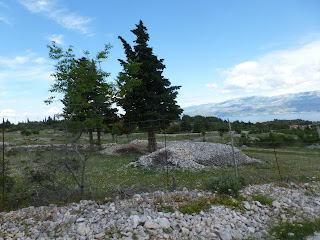 In Split and all the towns we visited on Vis and Brac, everywhere we were greeted joyfully with lots of hugs and kisses, stories were shared, we were well-fed, and then sent on our way with olive oil or wine.

I came home with a sense of what life was like for my husband's family in Croatia and a better understanding of why many people immigrated after the phylloxera pestilence wiped out the grape crops that my husband's family depended upon for their survival.  I can only imagine what life was like for my own ancestors who came from other parts of Europe at an earlier time. 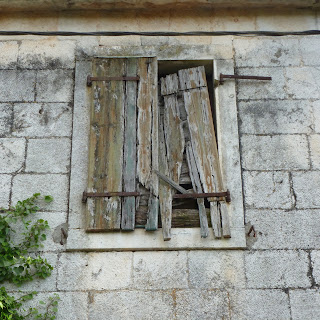 I will leave it to my husband to write up the genealogical findings, scan their photos, share their stories, and share the hundreds of pictures that I took. 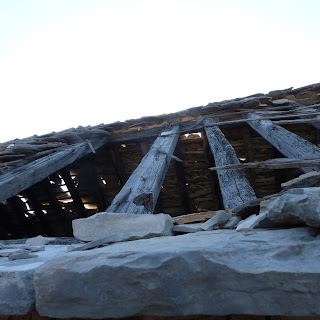 This blog hasn't begun to do justice to what I saw [900+ pictures] and the people I met.  But it is a start that I hope you'll enjoy. 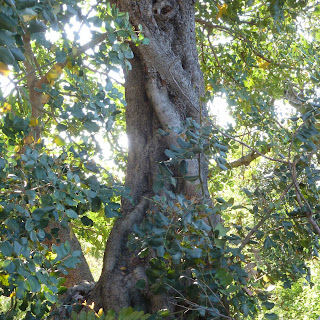 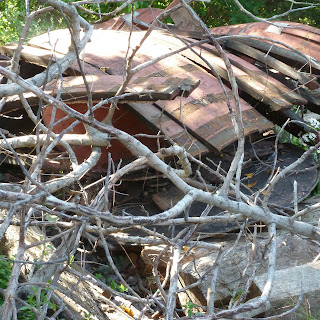