Eric Adolf Helsten immigrated to the United States in 1845.  He married Mary Hearty, an Irish immigrant, in 1849.  They worked hard and raised a family in Gaylordsville Connecticut.  None of his dozen siblings followed him, however, he kept in touch with letters that were shared back home between his mother and siblings.  One can only imagine how life in the the USA must have looked from afar to the children of a brother who was not doing very well back in Sweden.

Eric’s niece Johanna Carolina Hellsten decides to write to her uncle, appealing for funds to travel:

Please be so good as to pardon me that I, as the daughter of Uncle’s Brother Carl, with this our taking the liberty to write these lines, which my father does not have time to do, to divulge my heartfelt wish and to beg for an affectionate and happy answer to the questions below, that for me are extremely important and have bearing on my future.

As my dear Father this last year has ceased his work as a brewer and country shop owner and now lives in reduced circumstances and therefore can not afford to keep all four of us children at  home, I, as a big, strong, healthy seventeen  year old girl, used to brewing, commerce, and rough work and who longs for work in an unknown country where no one finds fault with one’s honest work or despises the virtuous for his poverty.
This in addition to the fact that many of my acquaintances have already left for, the employer America, which is why I, too, this fall intend to go there, if some noble person would help me with travel money and good advice at the arrival.

Since I have heard that Uncle is rich and happy in the country to which many long to go, I now set my hopes and prayers to Uncle for a kind answer to:

Could my dear Uncle please be so kind as to via a postal order to Upsala or a letter give, or, if need be, loan me 200 Kr for travel money?

Could my Uncle have use for, or know somebody, me as hired help for anything?

Could Uncle extend a helping and protecting hand to me at my arrival and until I have a position?

Does Uncle believe that a poor, but swift and untiring, girl can in an honest way earn a meager living through the work of her hands?

Please be so kind and make me  happy with a longed for answer mailed to my or my father’s address “Sweden Mosås and Södrabo”, which will decide my future fate, because if I receipt travel money and good advice, I plan to leave this fall.

My parents are, thank the Lord, in good health despite all their trouble and ask to send their heartfelt greetings in this letter, and also with loving thoughts for my future give me permission to leave.

In sincere hopes of Uncle’s loving kindness to me, with much respect, the grateful niece now persists.

Such a heartfelt appeal.  It turns out it came along with a letter from her father, Carl Robert Hellsten (Karl, Calle).  He confirms their desperate situation and appeals for both of them to come to the USA. 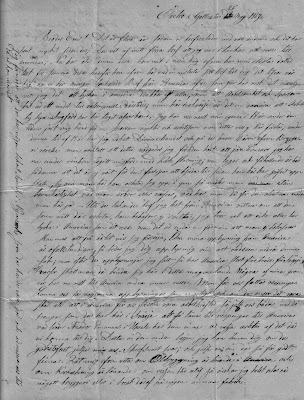 It is many years since we last exchanged letters and many things have happened since then.  You know from my last letter that I was thinking of going to America.  Now this trip has again come to my mind and even my oldest daughter Johanna wishes to do the same trip.  Wherefore she here encloses her letter to you.

It is our wish since we hear many tempting letters from America from the ones how have gone there.  I do know that everybody is not lucky in America but that hard work and frugality is a way to blessing.  But here in Sweden it is a dishonor to work because vanity has taken over.  I have now been on my own for eighteen years and during this time made myself know to be frugal, sober and to work hard but this is not enough here.  Under this time of 18 years, I have  had a general store and during the last 10 years also had a brewery but in spite of all this I had to declare bankruptcy last fall and during this last winter have started to do cork cutting.  But loss in circumstances are such her that it is not worth it for the poor to try since [if] he has [declared] bankruptcy [and] if he manages to work, everything up again he loses whatever he inherits or earns without mercy. What then do you have for all the work you do?

In the enticing letters I have read from America they testify to the one who wants to work there does not need to starve.  I think I know that all who go to America do not have luck there but it is even so an advantage that you do not have to be ashamed over earning a living in an honest manner.  If my information about America is not complete, I ask  you to inform me about this but judging from the information I have received, America has big preferences for Swedes.  Why should one then bind oneself then to this meager country?

Some of my neighbors have now gone to America and others plan to but we don’t have the money to go.  Please give us a complete information as possible and if you consider it reasonable for us to try to work in America and then help us both with the money that  you have here in Sweden to lend us as travel money to America.  Our brother Theodor Emanuel in Upsala has them.  We want to work off the money when we come to you.  This is the only security I can give you if you would be kind enough to help me us.

Write an answer soon and  help us if you find you would like to do so.  Let me also know if brewing beer is profitable in America and also if cork cutting is profitable.  If the trip there happens, I would prefer to work in a brewery or, if that’s not possible, in another kind of factory.  I assume that  you  have some Swedish acquaintances in New York that you could be kind enough to address us to when we arrive.

Now dear brother I have written about all that concerns the trip to America.  We can have much to write about but it is much better to be able to have a real conversation about it.  I will also mention that all of us siblings are alive and as far as I know everyone is in good health.

Lovis is married to a shop owner 20 Km from here whose name is A Nelzon.  Mari is close to Stockholm, Lina is in Upland and not far from Upsala Erica and Wennström are well.  Tilda is in Stockholm.  Ottiljana is in Upsala with our maternal aunt.   Now as before, Edla is a manager (director) at the Upsala Hospital.  Manne is a watchmaker in Upsala.  Frans is a goldsmith in Upsala Oskar is a watchmaker in Stockholm.  Knut is a teacher in the big school in Upsala.  Everyone has it well except for me and Oskar.  Oskar declared bankruptcy the same time I did and now I don’t know how he has it.

I hereby end this letter for this time with a kind greeting for yours from us.


Such heartfelt appeals to Eric, uncle and brother in the USA who must have wealth and success from his hard work, doesn’t everyone?

Does Eric send the requested funds as his niece suggested and bring over his niece and brother?
Or, does Eric let then use the funds that their brother Manne is holding for Eric in Uppsala?

Erica does write in pencil on the bottom of Carl’s letter “From L there are two steamers leaving or more every week.”  He checks out the costs and availabilities for travel.  Travel is much better in 1867 than when he and his wife came in steerage in the equivalent of the “coffin ships” — no steamers for their earlier, much longer, trips.  The travel across the Atlantic Ocean has improved in the last couple of decades.

The letter beloe from his brother Manne (Theodor Emanual Hellsten) indicates Eric’s decision and the means of funding the trip, instead of just sending the suggested 200 Kr each to cover the trips.

From our heart I wish your daughter and son-in-law happiness and blessings.  We’d also like to thank  you for the pictures that you sent us.  As you promised in a letter to our brother Carl that he or his oldest daughter Hanna could borrow your inheritance from our parents to pay for the trip to America and Hanna decided to go, I have now sent the money to Lovis, she is married and living in the neighborhood of Örebro as you probably know with a request to her that she give the money to Hanna when she is ready to travel.  The reason why the sum of money isn’t bigger can be explained by the following statements.  While our mother was alive, she lent Calle 700 crowns which including interest 6% counted up to the day of dividing up the estate 3 November 1864 adds up to 77 crowns 37 öre which sum he has not been able to pay back.  When you subtract from this sum his inheritance he still owed each and everyone of his siblings 36 crowns, 45 öre.  About a year ago he had to go bankrupt without any assets.  At the time of the partition of the inheritance, we siblings did decide to send you at some time a gold ring that belonged to mother and she used and also a teaspoon since we wanted you to have a tangible memory from our parents’ home.  These things I will send to Lovis at the same time as the money and ask her to give them to Hanna to bring to you after a safe trip.  I now have to end these lines with many loving greetings from all of us to you and yours.

My wife sends many greetings to you and promises to write at another time.

So Eric will fund one of his two family members to travel at this time.
His mother Lovisa Charlotta Robert Hellsten died in 1863.  There was a small estate which brother Manne was the executor.  Eric’s share has been held in Uppsala and managed by Manne. BUT, the funds are not as large as Eric expected because there was a debt: brother Calle had borrowed 700 Kr from their dear departed mother and never repaid her and now that debt is shared equally among the other 12 siblings.

Manne has forwarded the travel funds to their sister Lovis in Örebro who lives near Calle and Johanna and Lovis will give the money to Hannah (Johanna) when she is ready to travel.  He did not forward the funds directly to his bankrupt brother.

Eric’s sister Otillia writes him on 29 October 1867:
Hanna who has the courage to travel to America[,] yes god[,] let her happily and well arrive there

This letter from Manne was written to Eric at the end of October 1867.
So, did Johanna immediately leave for the USA in the fall of 1867?


©2015 Erica Dakin Voolich
The link to this post is http://genea-adventures.blogspot.com/2015/05/dear-uncle.html