52 Weeks of Abundant Genealogy: Esther DeLoss, from a family trying to be "Lost"?

The fifth week challenge:  Life experiences:  Sometimes the challenges in life provide the best learning experiences.  Can you find an example of this in your own family tree?  Which brick wall ancestor are you most thankful for, and how did that person shape your family history experience?

For years I've been stuck on Esther DeLoss, my GGG'grandmother.  I knew she was married to Nathan COBB.  The COBBs are one of those families who many folks have researched back to Henry COBB who came to Plymouth Colony in 1632.

I had this nagging question, who was Esther?  Family trees online have incorrect information for her.  I have looked for obituaries and a death certificate for years.  In her son-in-law's scrapbook was a news clipping:  "COBB--At Oak Park, January 25, Mrs Nathan Cobb, aged 83 years.  Mother of Mrs. R. S. Worthington.
Funeral services at 8 a.m. at residence.  Burial at Rosehill"  Handwritten on it is "1889."
Years later I found:
"Mrs Nathan Cobb, the venerable mother of Mrs R. S. Worthington, died last Friday, and was buried in Forest Home Cemetery on Sunday."
Oak Park Reporter, 1 February 1889.
For starters, was she buried in Rosehill or Forest Home Cemetery?  I found her at Rosehill along with her husband and his brothers' families even though the newspaper coverage of his death said he was buried in Oakhill.

The State of Illinois has no death certificate for her and her daughter said they came from Rome NY to Chicago after she was born.  Luckily the cemetery had birth and death information for her:
born 31 August 1805, died 26 January 1889.  Finding her, and visiting the cemetery was a breakthrough as to dates.  Her daughter's death certificate gives her mother's name as Esther DeLoss born in an unknown city in New York.

I continued looking in NY state for a DeLOSS family without much luck.  Then I decided that maybe I should see what I could find out about a Louis Homri DeLoss whose obituary was also in Esther's son-in-law's scrapbook.  Maybe, just maybe they were related, afterall, DeLoss didn't seem to be a very common name in my searches.

I transcribed the obituary for this beloved preacher who died in Iowa in 1865, twenty-four years before Esther.  Louis was born four years before Esther (at least in that obituary), so maybe they were siblings.  I learned that "In his preparation for the ministry, Mr DeLoss was subjected to the obstacles and hindrances known only to the poor, but his energy and perserverance  he was successful."

I contacted historical societies in NY state in the neighborhood of Rome NY where she was supposedly from.  No hits.  Then I contacted Hamilton College's archive -- according to  his obituary, Louis graduated from their seminary.  Maybe there were some records.  The wonderful archivist said he didn't have any record of anyone by that name graduating from Hamilton, BUT [drumroll ...] there was a Louis Homri LOSS who graduated!  Same first and middle name, slight addition to last name!

Once I searched for him, I found an obituary in a Presbyterian Almanac which said:  "LOSS, LEWIS HOMRI -- The son of Samuel and Esther Loss was born in Augusta, Oneida County, New York, July 1, 1803."  This gives a different year of birth, but also gives us parents and place!

Now I started searching for LOSS, instead of DeLOSS.  There are a few folks named LOSS and as a result I have connected with another researcher looking for the LOSS family in NY state -- I answered her post on Rootsweb many years after she originally posted it and I am the only person who responded directed to her post!

It looks like they are siblings (not proved, but working on it), and it seems that their father was called Samuel Loss sometimes and other times was Samuel DeLoss, while none of his siblings changed their names -- their were always called Loss.

I telephoned the elder widow of one of Louis Homri DeLoss's great grandchildren and she said she has traced her side of the family, but after no success on her husband's they decided that "they wanted to be lost!"

What I have learned is the probable actual birth name of Elnora Esther DeLoss, and that there are wonderful folks out there who patiently answer questions by researchers like me and are willing to join in the hunt.  I now have found a co-conspirator to share questions, finds, and hopefully some clue as to why LOSS became DeLOSS in an effort to become LOST!

A Wonderful Discovery in the Concord Library

While in Concord MA to find my 6 G'grandfather's tombstone, I spent the morning in the special collections at the Concord Public Library with another DAKIN family researcher.  The Librarian was very helpful even though they didn't have early Concord First Church records in the Library as we had hoped.

We did find one gem from Rhode Island vital records:

This was in the folder with genealogical notes by an unnamed researcher, donated by Mrs.H. B. Yamagata of Lakewood NJ.  She is the person who published Albert Dakin's book on the DAKIN family after the author died.

Now, this was surprising since the marriage date for them was known, it is in Albert Dakin's book, Descendants of THOMAS DAKIN of Concord Mass. (1948) but no place was given in the book.  Others have published they were married in Hudson NY where they raised their family.  Well, now we know they were married in Rhode Island by a Baptish pastor, six years after Paul have been disowned by the Quakers in the Oblong which I wrote about in this blog.

As one question is answered, another one is raised:  who were her parents?
Were they John GIFFORD and Lucianna HATCH as had been presumed but not proven?
How did Paul and Lucy end up getting married in Rhode Island?  The potential parents of Lucy were from Sandwich and Falmouth MA.  Paul was born in Pawling NY.

I need to see if I can get a copy of this record from Rhode Island Vital Records.  It  might contain some clues!
Posted by Erica at 7:08 PM No comments: 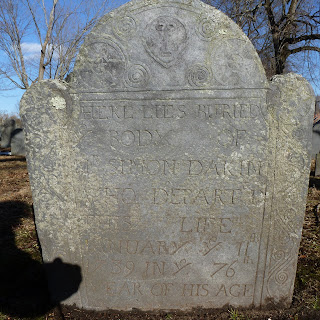 It was so bright that it was actually easier to read with a shadow on it even though it make it look like it had legs! 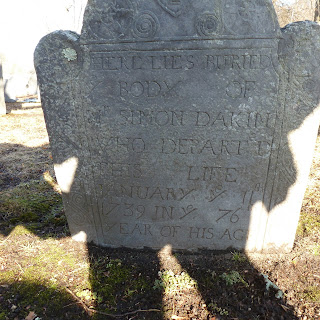 Simon DAKIN was born in Concord in 1663, son of Thomas DAKIN who was one of the persons who had first division lands.  He did not live in Concord his whole life, he went with others from Boston to South Carolina in December 1695.  They found a settlement originally called Newington and then re-named Dorchester (after Dorchester MA).  The settlement was not a success and Simon returned to Concord around 1700 to 1702.
Posted by Erica at 5:26 PM No comments:

Geneabloggers have been challenged to 52 Weeks of Abundant Genealogy, as a way to share the gems of resources we have found in our own research.  This week's request is for information about the genealogy blog that are we most thankful-- is it an early blog? or a current blog? why should others read this blog?

I am a relative newbee to genealogy blogs.  I had been reading other kinds of blogs, but genealogy ones weren't on my radar.  Last year, I found the Geneabloggers website and thought I should post a blog I had started in an effort to find one of my mystery women, Ursula WRIGHT.  I started that blog with the idea that maybe, just maybe someone else was looking for her, would see my blog and contact me.  Then I got to thinking I could write a more geneal blog also after reading others.

I read a bunch of genealogy blogs now by wonderful authors.  Some I read daily.  I love checking to see who has posted to G+ their latest blog posting.

I always read Randy Seaver's Geneamusings.  I find his daily posts interesting and covering a wide range of topics.  I've found ancestors in his Surname Saturday postings, interesting links to other blogs in his weekly review of other blogs, felt challenged by his Saturday Night Challenge (even if I don't always do it), enjoyed his "not so wordless Wordless postings," learned about webinars to help educate me, and learned about Geneabloggers radio which has become part of my Friday night entertainment.   His blog is always a wealth of information.
Posted by Erica at 12:00 PM 3 comments: