The FISH family in the "Boston Evening Transcript"


When I'm researching, I'll periodically come across a reference to a source not available online.   I'll print out a copy of the information and add it to my folder of materials to borrow through Inter Library Loan or to access at a particular library.  Frequently, the American Genealogical-Biographical Index (AGBI) will come up.   According to Ancestry.com: "Most of the works referenced in the AGBI are housed at the Godfrey Memorial Library in Connecticut. A photocopy service is available."

For a long time I didn't really understand how to read the reference.  For example, I am researching Lydia Fish, and the citation referred me to Vol. 54 and page 265.  Before I learned that the real meat of the reference was below that, I went to find the AGBI in a library only to be disappointed that there wasn't more information there.  This time when I had a reference to AGBI, I knew to read below the initial information and to search for that:
"Gen. Column of the "Boston Transcript:. 1906-
1941. (The greatest single source of material for
gen. Data for the N.E. area and for the period
1600-1800.  Completely indexed in the Index.):
13 Dec 1921, 9343; 23 Jan 1922, 9343; 15 oct
1934, 2684"
What I needed to find were copies of the Boston Evening Transcript, not a copy of AGBI.
The New England Historic Genealogy Society in Boston has the pages (each the size of today's Boston Globe's) with the newspaper's "Genealogy" columns all carefully saved in multiple boxes, filed by year then month.

Wikipedia described the Genealogy column in the Boston Evening Transcript:
Because of the genealogy column The Transcript is of value to historians and others. Gary Boyd Roberts of the New England Historic Genealogical Society noted:
"The Boston Evening Transcript, like the New York Times today, was a newspaper of record. Its genealogical column, which usually ran twice or more a week for several decades in the early twentieth century, was often an exchange among the most devoted and scholarly genealogists of the day. Many materials not published elsewhere are published therein."[12]
[12] New England Historical Genealogical Society: Genealogical Thoughts by Gary Boyd Roberts

The frequently full page column devoted to Genealogy had its own rules: 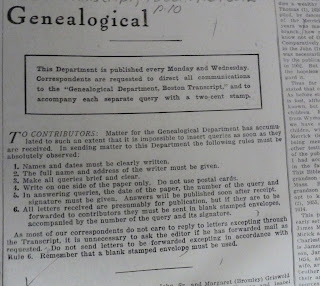 There were three parts to the column each day:  QUESTIONS, ANSWERS and NOTES.
It turns out that my reference to Lydia Fish, had one Question, one Answer and one Note.  Unfortunately, they were not devoted to discussing my Lydia, however they did include a mention of Lydia Fish in each case and did include some extensive family history details. 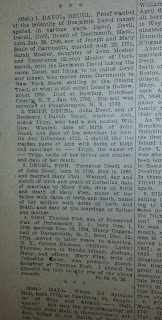 “(9343.) 1. DAVOL, DEUEL.  Proof wanted
of the identity of Benjamin Davol, (name
spelled in various ways, Davol, Devil,
Davoll, Divil, Deuel) of Dartmouth, Mass.,
born Jan. 26, 1709, son of Joseph and Mary
Soule of Dartmouth, married Aug. 22, 1731,
Sarah Mosher, daughter of John Mosher
and Experience (Kirby) Mosher of Dart-
mouth, with the Benjamin Davol taking the
name Deuel, not liking to be called Devil
any longer, who moved from Dartmouth to
New York State, settling in the Oblong
Tract, at what is still called Deuel’s Hollow,
about 1735.  Died at Pawling, Dutchess
County, N. Y., Jan. 19, 1792.  His will was
recorded at Poughkeepsie, N.Y., 1892.
2. TRIPP, DEUEL.  John Deuel, son of
Benjamin (Davol) Deuel, married Ann,
widow Tripp, who had a son named Wil-
liam.  Wanted, date of birth of John
Deuel, and date of his marriage to Ann
He died December, 1772.  I should like the
maiden name of Ann with dates of birth
and marriage to ____ Tripp, the name of
_____ Tripp, name of her father and mother,
and date of her death.
3. DEUEL, FISH.  Cornelius Deuel, son
of John Deuel, born in 1756, died in 1809,
and married Mary Fish.  Wanted, day and
month of birth and death of Cornelius, date
of marriage to Mary Fish, date of birth
and death of Mary Fish, name of her
father with dates of birth and death, name
of her mother with dates of birth and
death, and date of the marriage of father
and mother.
4. FISH. Thomas Fish, son of Preserved
Fish of Portsmouth, R.I., born Dec. 1,
1703, married Dec. 16, 1724, Mercy Cogges-
hall of Portsmouth, R.I., born Dec. 22,
1704, moved in later years to America,
N.Y., County Dutchess.   Children:  Lydia;
Thomas, born in Rhode Island; Joshua;
Mary, and others.  Mary Fish, wife of
Cornelius Deuel, was probably grand-
daughter of Thomas Fish.  I should be
grateful for help on any one of the above
records.                    H.G.G.M.”

The answers were provided by serious readers who had information and would write back to the newspaper with their information.  This response was relatively quick, 23 January 1922, and even contained information on where to find their sources [the town birth records of Darmouth, Mass., a deed in Dartmouth, Mass. and a request for military exemption in Oblong, Dutchess County, NY].  It didn't include formal citations, but it gave clues for a serious researcher to follow. 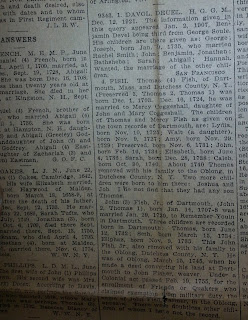 Interestingly, the first part of the question was actually previously asked 15 years ago and so the answer referred the reader back to the column on 2 January 1907.

On 15 October, 1934, there is a Note about the FISH family.  It doesn't give me information on my Lydia Fish, however, it does give a clue about the relationship between the various FISH families in the New England Colonies in the 1600s and it tells me about her ancestors.  It doesn't say that it is in response to a question, but it does ends with an interesting Fish family which had 3 sets of twins (amazing in the days before fertility drugs) and  a reference to someone named H.J.B.C. from a column on 23 August 1933.  I didn't see that until I got home, so that will be saved for a future trip to NEHGS to check out.

Here is the transcription chocked full of FISH family details thanks to F.E.W.K.:

What an incredibly caring and sharing community of genealogists who kept that column of the newspaper going over many years.  Very similar to the community of support I have found today between  genealogists, town employees, genealogy & history societies, blogs, G+, and FB.

I have no idea how many questions that were submitted went unanswered.  I'm sure they had their own "brick walls" of the day that they too struggled with solving, just like we are today.  I could list a few I'd love to have submitted.

©2013 Erica Dakin Voolich
The URL for this page is: http://genea-adventures.blogspot.com/2013/07/the-fish-family-in-boston-evening_25.html