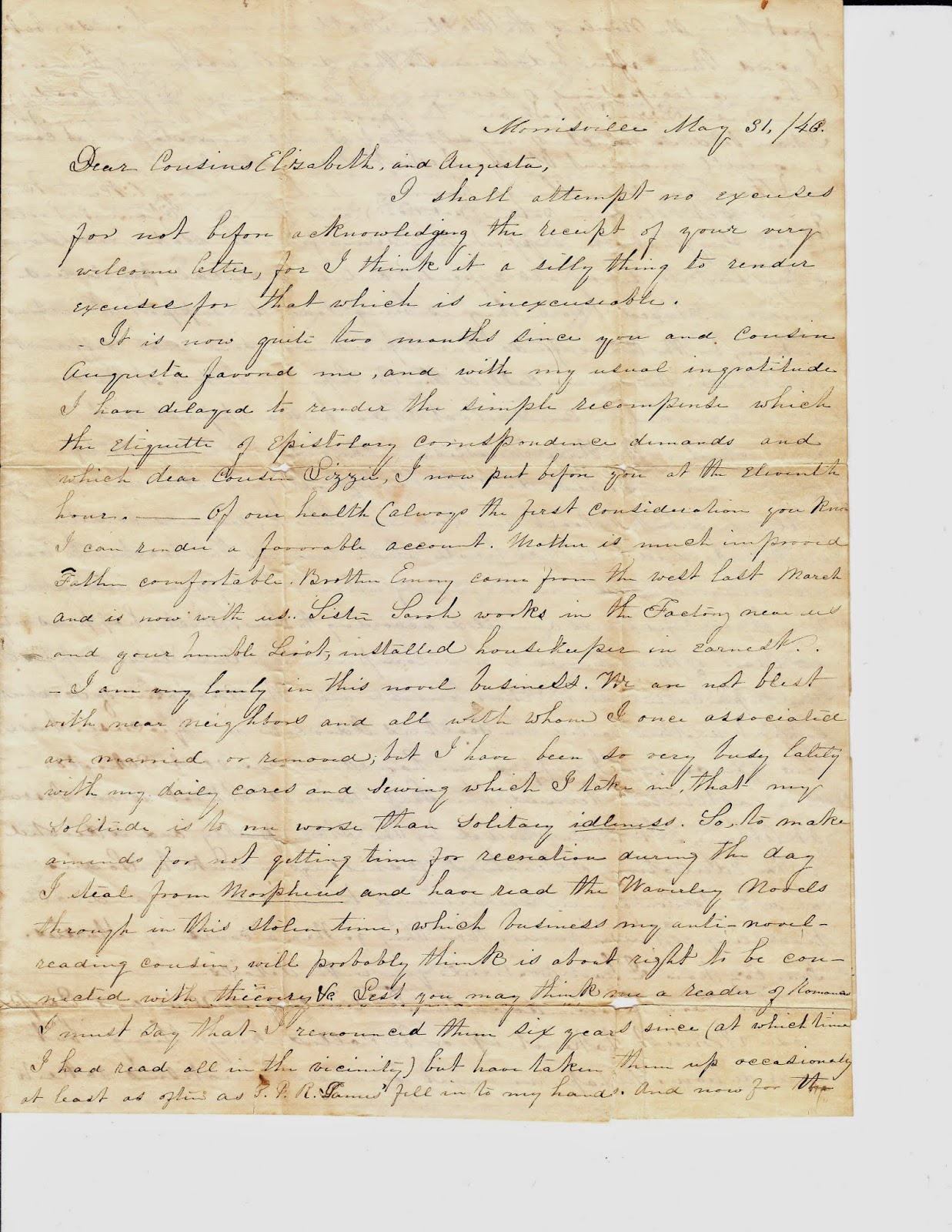 In 1848, Elizabeth and Augusta Radford in Middlebury CT receive a letter from their cousin Louise Pauline Radford in Morrisville NY.  It was written on one large piece of paper, folded, addressed and mailed.  It contains wonderful clues of the life of a woman in the 1840s in rural USA.  She might be busy with housework, but her mind was very busy!

She starts with pleasantries, updates on the family, complaints about the loneliness with few neighbors, busyness of household chores and sewing, and coping with the solitude of life by reading novels.

Morrisville  May 31, /46
Dear Cousins Elisabeth and Augusta
I shall attempt no excuses
for not before acknowledging the receipt of your very
welcome letter, for I think it a silly thing to render
excuses for that which is inexcusable.
It is now quite two months since you and Cousin
Augusta found  me, and with my usual ingratitude
I am delayed to render the simple recompense which
the Etiquitte of Epistolary Correspondence demands and
which dear Cousin Lizzie, I now put before you at the Eleventh
hours. ——-of our health (always the first consideration you know
I can render a favorable account.  Mother is much improved
Father comfortable.  Brother Emory came from the west last March
and is with us.  Sister Sarah works in the Factory near us
and your humble Lieut., installed housekeeper in Earnest.
—I am very lonely in this novel business.  We are not blest
with near neighbors and all with whom I once associated
are married or removed; but I have been so very busy lately
with my daily cares and sewing which I take in, that my
solitude is to me worse than solitary idleness.  So, to make
amends for not getting time for recreation during the day
I steal from Morpheus and have read the Waverly Novels
through in this stolen time, which business my anti-novel-
reading cousin will probably think is about right to be con-
nected with thieves etc Lest you may think me a reader of  Nomondes
I must say that I renounced them six years since (at which time
I had read all in the vicinity) but have taken them up occasionally
at least as often as P.P. R. James’ fell into my hands. and now for the


She apologies from wasting time on light reading that her cousin will criticize her for doing before going on to discussing local schools run by the county.  Parts of the description could easily have been written about schools 160 years later!  I found it interesting to read of the structure, county certification, teaching requirements and teacher preparation available then.

first time the Novels of Sir Walter Scott are in my hands, but
I read them after bed-time so they do not waste my time.
I have anticipations of receiving a lecture on Light Reading
from Cusin Lizzie!  What are the possibilities?  I shall shall answer it.
I have said so much of my self that I will now stop, it can
be of little moment the tho you what I am about . ———
—- Then are some things however which you may like to know
of our schools, our pastimes (political) and so on.  Of our schools
I can say, that the support they derive from the State is seldom
sufficient to defray al Expenses and in such case parents and
patrons are taxed.   Something is being done to support the schools
Entirely by the Public funds.  Our Supervision is some what different
from yours.  An officer called the Co. Superintendent is at the Source
of management in the County.  Each Town has a Superintendent and
each school Dist. thru Trustees  and Cl. Town Supt’s  give Certificates
of qualification as also does the Co. Supt. Any Teacher who is thought
fully competent to teach any Common School, receives sometimes
what is called a Co. Certificate which licenses this teacher to teach
any common school in the county without being again inspected
‘till the certificate is annulled according to Law, which happens only
in cases of misbehavior  or non-compentency.   Our State supports
our paper called Dist. School Journal and the Association of Teachers
supports another called The Teacher’s Advocate in Syracuse.  I will
send you one. —— I suppose we have some excellent schools. —
An institution termed the State Normal School is in Session
at Albany.  It is supported by the state partly and is devoted
to the Education of Teachers.  10 shillings a week to Ladies
and 8 to Gentlemen are allowed towards board and all
travelling expenses paid.  Then they go thru a course of Studies.
Dear Coz, how I have pestered you with details ——————-
You have thrown down the Political gauntlet and I sup-
pose I must take it up or be called any thing but
coeur de lion.  Perhaps we ought for mere Patriotism’s sake to


For the rest of the letter, Louise then gets into the serious discussion of what every woman should be concerned about:  slavery!  She sees the political discussions of the day, such as free trade or tariff, insignificant to the real problem folks should be discussing and acting upon.

make war upon each other that the worlds may have this
benefit of the sparks of light shrink off in the conflict.
Perhaps I can give a few reasons for being an abolitionist besides
the weighty - one that my father is.  I must first put the bridle
on my pen that my prose do not degenerate to poetry
—The questions of National Policy so woven with what ought to
concern every woman, I profess to know little about.  But there
is enough I cannot help knowing which throws all these “Party
Hobbies” into the shade.  Of Free Trade or a Tariff, a bank or Sub-Treasury
I know not the choice; but there is to me something in the
“institution” of Slavery that conquers my indifference to Politics
and makes me a certain Kind of Politician.  My views being general
are probably correct in the main, as nearly all acknowledge.  All
admit the inconsistency of a Free County’s cherishing Slavery.
I doubt not Cousin you will do so.  In the next place which
is the most important to us, as a nation, a sound heart and
body free from disease with coarse of one, or a system abused
and disorganized, with perhaps a degree of soundness of brain
which only renders the realization of suffering more acute == I have
used myself to look upon Slavery with the almost abhorrence
and to … you  how I would act would inform you how
I would have the Nation act.  I will as I best may, do all I can
to pull down this Institution of Crime and Abuse, and wen I favored
(I should not consider it a favor in any other case) with the right of
suffage I should consider myself trifling with a sacred trust if
I did not use it in behalf of the oppressed.  Some ask, “how are
you going to effect your object?”  I answer, not my standing idly by
and excusing myself.  We have all duties to do; Political duties as well
as social and religious ones.  …. ….      note is merely
the creature of his own will and consider himself absolved from all
responsibility in its use, but give him as more enlightenment under-
standing and quicken his sympathies and this folly ceases. ——-

She declares herself as an abolitionist.

I will not say more.  You may understand me to be thoroughly
antislavery and Pro- abolitionist.  I believe in action exertion for this
common weal of the people and the Slave.  As, my dear cousin
but look this horrid monster in the face for a moment.
What on the little questions of Terrifs and bank which can result
only in the gratification of a party feeling (in my eyes) compared
with that existing evil which is but this very Sum of villainy?
Which degraded our notion in the eyes of those very notorious
in affect to despise and which rendered  our boasted Land
of The Free” also the prison of the slave.   I confess I can keep
no terms talking on this subject.  To rid our country of
the disgrace  and  sin of Slavery is a work which lies
before the people and it ought to be accomplished.  Then
when the sun shines on all God’s children in this land
as common recipients of his blessings, let the smaller Q’s
of national economy be arranged.  How absurd to devote
all the energies of the Physician to curing a scratch while
the diseased and dying body demand his restoring powers.


[addressed part of letter when folded]


Do forgive me for troubling you with so much nonsense badly
written.  Tis provoking when written well.  Answer me immedi-
atibly and I provide you you shall complain no more of my
negligence as a correspondent.  Yours affectionately  L.P. R.

There are online trees with descendants of David Radford, but no parents.  All of the census sources say that David Radford was born in Connecticut, as was Beers and his children.  David's children were born in Madison County NY

I have one more letter from Louisa that Elizabeth saved, that will be another blog post.

©Erica Dakin Voolich 2014
The link to this page is http://genea-adventures.blogspot.com/2014/04/dear-cousins-elizabeth-and-augusta.html 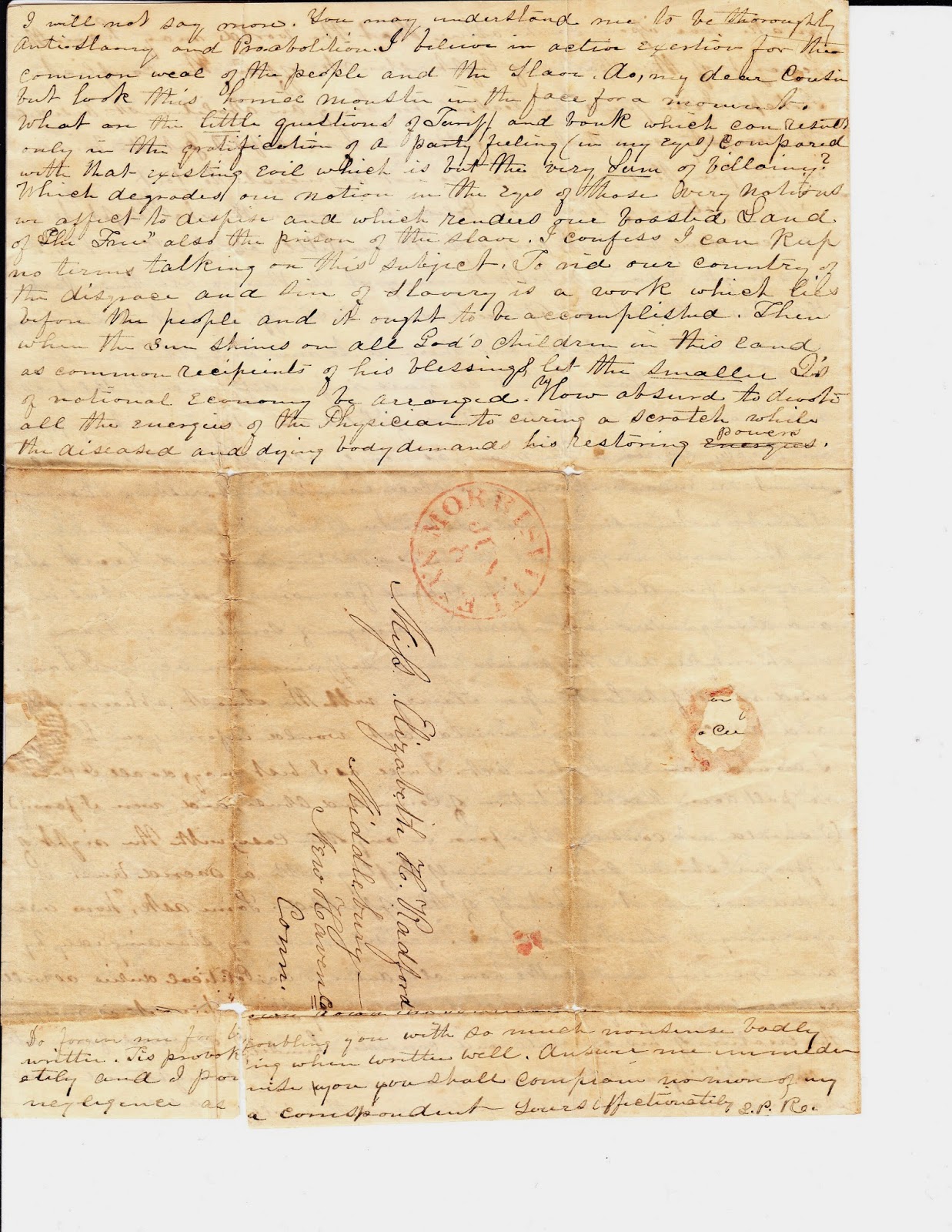