I was researching at Allen County Public Library in Ft Wayne, Indiana last week Thursday and Friday.  Such a wonderful genealogical resource with very helpful librarians.
A good friend was with me.  I worked on my some of my challenging ancestors; she spent the time extending her mother's family a couple more generations -- much to her joy.

The night before we went, she talked on the phone to a relative who had mentioned, "you know, there was a murder in the family."  She called and got as many details as she could:  year, names, place, etc.
Unfortunately the place was "Indian Territory," the last name was correct, the first name wasn't, the year was correct.

"Indian Territory" is a rather big territory to look in for someone.

When we got back to her home Friday night, I got to thinking:  if there was a murder, there's likely a newspaper story about it.   Off to GenealogyBank.com.  On the second try with a search of 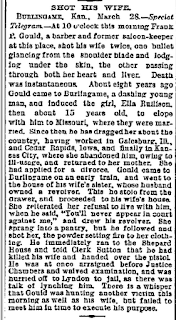 
With these articles my friend not only has a description of the tragic murder in Burlingame, Kansas on 28 March 1887 of Ella Ruilison Gould by her husband Frank Gould leaving 3 young children parent-less, but she has many clues to use to trace the mother back in the family.


In 2009, genealogist Stephen Danko was traveling to Albany to work on some of his ancestors and offered to photograph the grave of my GGG'grandmother, Martha SEARING who married Denison WORTHINGTON.  At that time I had just learned from the Albany city historian that Martha was buried in the Albany City Cemetery in the LaGRANGE family plot of her husband's 2nd wife.

William died on 19 September 1837, Harriet died on 5 June 1838 and then Martha died on 23 March 1839, leaving Denison, a single father with a seven year old son, Robert Searing.  If you notice, all three of these people died between 1837 and 1839; the small detail of finding their graves in the Albany City Cemetery was that it didn't open for burials until 1843.  Clearly the tombstone with all three names, with Martha at the top (the last to die), was done years after the first death; and at some later time the bodies were moved to this cemetery.  Here is the inscription on the tombstone:

Denison worked as a clerk and then about 1835 went into the grocery business with Mr Gilbert, it became Worthington & Davis until 1847 when Denison moved to Oconomowoc, Wisconsin.  Before moving to Wisconsin, he married Mary Ann LaGRANGE on 3 June 1840 in Albany NY.

I have not yet found out when the 2nd Presbyterian Church closed, but that is probably when the three bodies needed to be moved, most likely from the Church's cemetery.  Denison and his 2nd wife and children were already in Wisconsin and so the family of his second wife, his in-laws, Gerrit and Mary LaGrange,  must have arranged to move the graves of Denison's first wife and their children into the LaGrange family plot and add a tombstone for them.  He must have had a good relationship with his in-laws!

Over the next 15 years Mary Ann gave birth to seven children before she died 15 June 1856 in Summit Wisconsin.  Denison was left a single father with now 8 children, the youngest was 1 month old.  His oldest son, Robert, moved to Chicago and took a job as a clerk leaving Denison at home with Denison LaGrange (14), William Henry (13), Mary Frances (11), Martha (9), James LaGrange (6), Garrit Hazzard (2) and Frank Town (1 month).

By the 1860 census, Denison is still living on the family farm in Wisconsin with sons William (16) and James (11).

Meanwhile back in Albany living with their LaGrange grandparents are Denison (20) who is working as a clerk, Mary (15), Garret (6), and Frank (4).

Martha (13) is living with a physician in Oconomowoc, Wisconsin:

His oldest son, Robert (25) is still in Chicago, now living in a residence hotel and working as a bookkeeper.

He didn't marry his third wife until after the 1860 census, even though 1860 is the estimated  year of Denison marrying Julia PROUDFIT (widow of McNaughton).  She died four years later on 21 February 1864.

I thought I  had sorted out the story of my GGG'grandmother, not sure I'd find any real details of her short life.  Then seven years after I received a copy of the picture of her tombstone, Richard Worthington posted these pictures on my FaceBook page.  I've never seen either picture before, nor have I seen any pictures of Denison and Martha.  What a wonderful surprise!