Death on the Railroad Tracks, the Sequel


In two earlier posts [Death on the Railroad Tracks part 1 and part 2], I wrote about the death of Nathan Cobb on the Northwestern RR tracks in Oak Park, Illinois on 24 June 1892.  I focused on the fact that the train tracks were not elevated and right down the middle of the street -- very easy to be hit by a train.

At the time, I was amazed how many people had accidents involving either trains or "grip cars" in one day in one article in the Chicago Tribune, but I focused in the blog posts on Nathan Cobb.

I took the time to expand the blog posts into a full article about Nathan Cobb and about the other folks mentioned in the article -- some were in another accident or were helping out someone who had been injured.  I included information on grip cars.  I ended with an obituary that I wrote for Nathan Cobb -- his life deserved more acknowledgement beyond an elderly man suffering from dementia walking in front of a train.  I can only hope the people named in the article will help someone else who is searching for a "missing" relative that seems to have vanished without any death certificate. 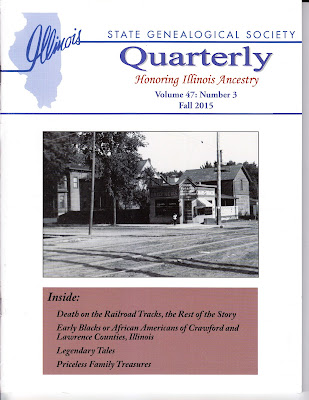 When the ISGS Journal arrived, I was surprised to see that the photo of South Blvd and Harlem Ave. from the Oak Park River Forest Historical Society was featured on the cover.
Such a nice surprise.

The link to this post is http://genea-adventures.blogspot.com/2015/10/death-on-railroad-tracks-sequel.html
©2015, Erica Dakin Voolich