In Mild-mannered Clerk or Secret Service Agent ... The Rest of the Story! I wrote about Harry Bogart Richardson's exciting adventures in the Secret Service chasing counterfeiters in Denver.  I included newspaper clippings of arrests and mentioned that I had confirmed that he worked for the Secret Service for 2 years, 1907-1909.

What I didn't have was any of the actual daily records of his life in the Secret Service -- if there was newspaper coverage of arrests and investigations, there must be more details.  I also have wondered why would someone who in all the decades in the US census was selling insurance or bonds or working as a clerk would have decided to become an Operative for the Secret Service?
The actual records from the National Archives might answer some questions.

Oh how revealing those records turned out to be!

One letter, dated 28 November 1906 from the Chief, thanks Harry for information sent to the Secret Service, 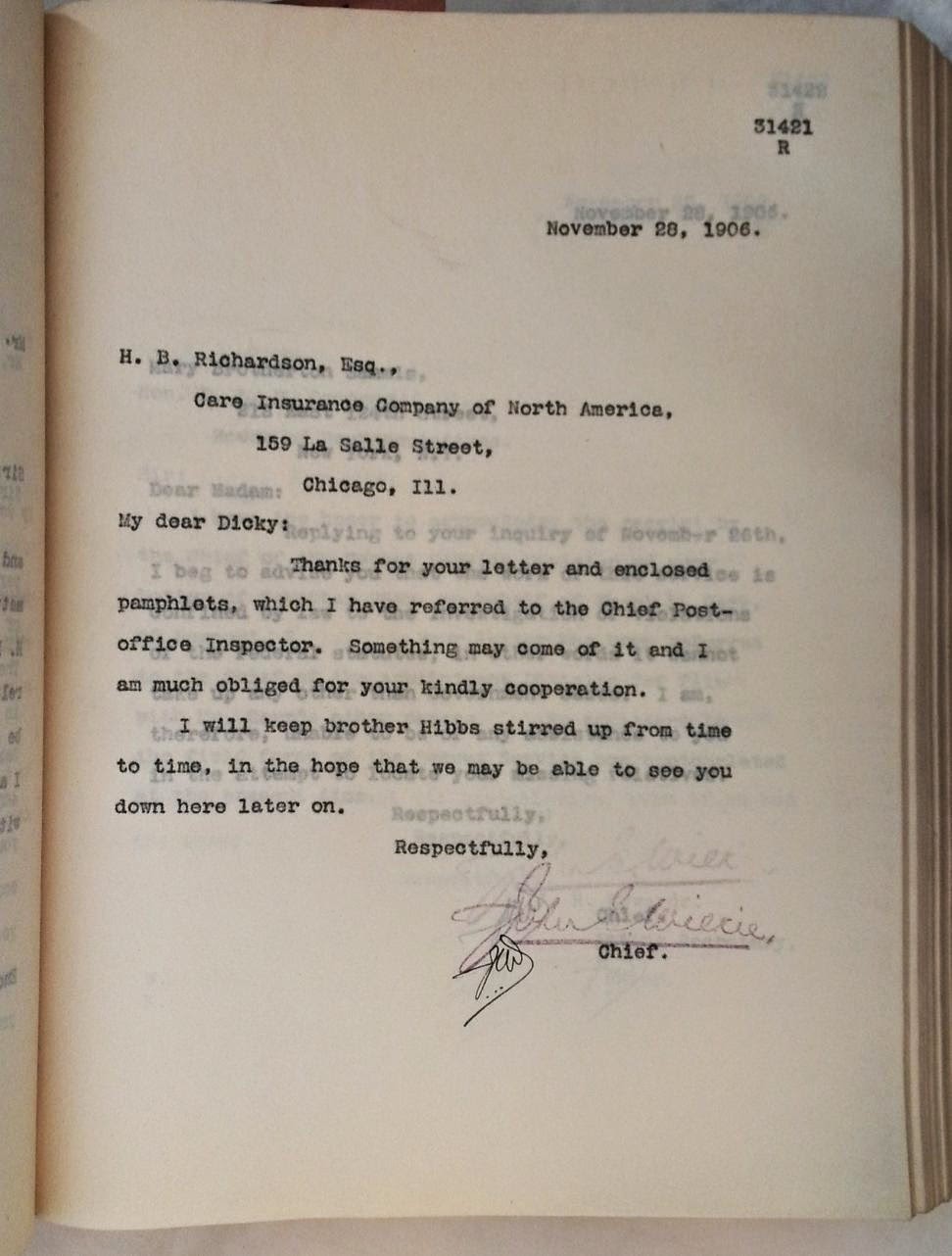 This sounds like John Wilkie, the Chief of the Secret Service, already knows Harry Bogart Richardson.

The next communication to Harry from John Wilkie  is 15 March 1907, 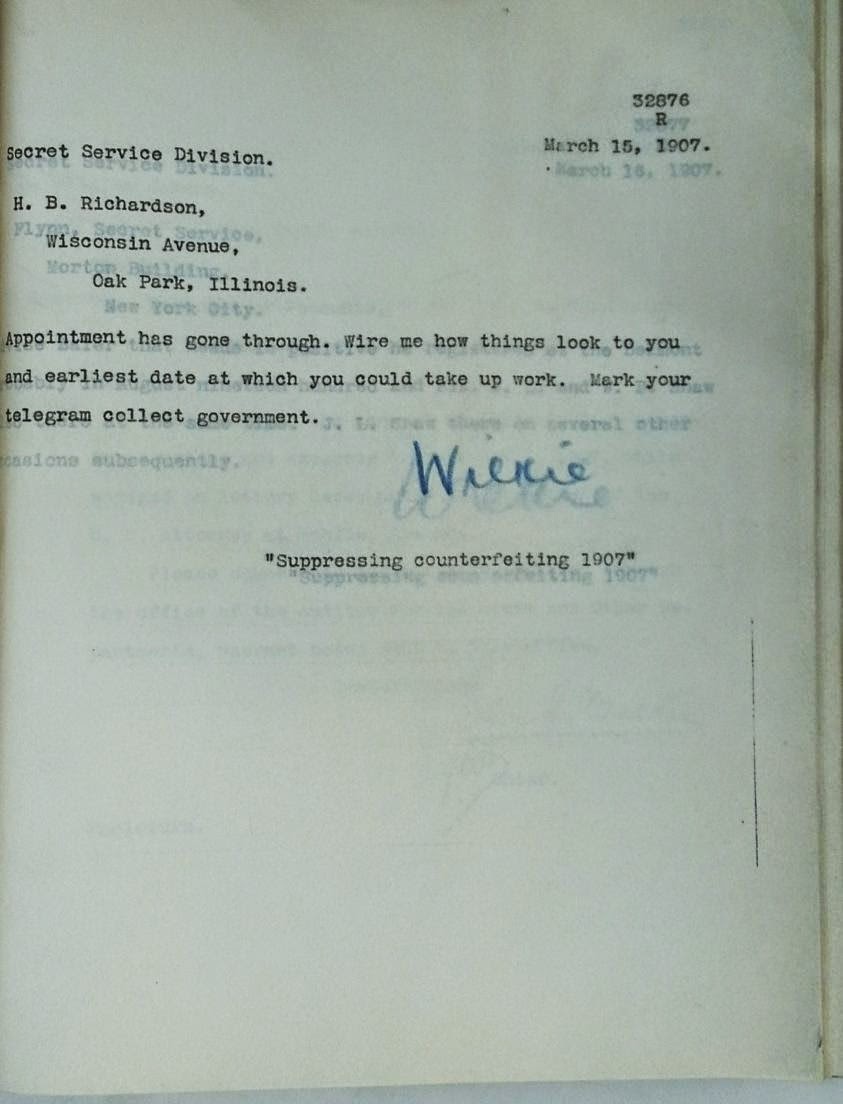 telling Harry that his appointment has gone through -- not telling him what it is-- that comes on 18 March, sending him to Denver to report to Lucien Wheeler in the Quincy Building at a $4/day per diem.

Among the letters in the files from the Secret Service is a letter from Harry to John Wilkie, explaining why he needs the job. 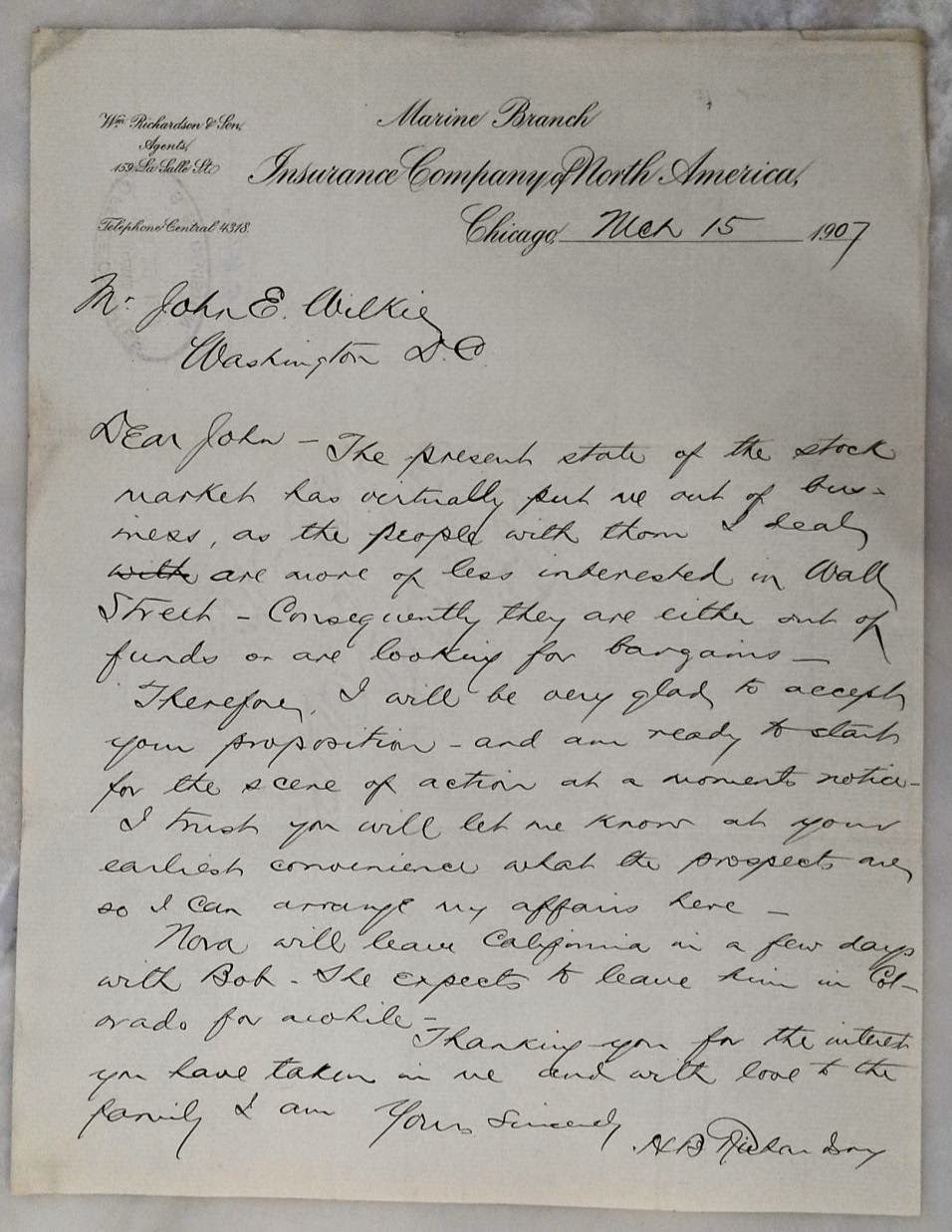 "The present state of the stock market has virtually put me out of business, as the people with whom I deal are ... less interested in Wall Street-- Consequently they are either out of funds or are looking for bargains.."

A financial crisis starting after the Stock Market peak in 1906, developed into the Panic of 1907.  Clearly, the normal life of commenting to Chicago to sell stocks or bonds or insurance was not such a secure living for a family of 4 -- time to check with your friend who used to be a journalist in Chicago who then went on to be the Chief of the Secret Service, maybe he would have some work to offer.

This was just the beginning of Harry's adventures.
He spent the next year chasing folks involved in land fraud in Denver and the year after that chasing after counterfeiters.  There are many pages of daily reports in the National Archives about the day to day life of the agents in Denver.  They documented everything (not all of it is so exciting as the newspaper stories might lead one to believe).

This year's book for the family is the story of Harry's year chasing counterfeiters -- it has all the details of the daily life of the agents in the Denver office. 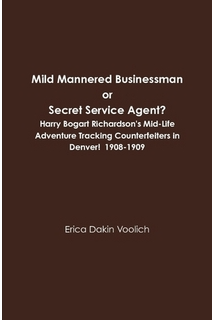 So, if you are interested in what the life of a secret service agent was like, or if you have some ancestor that the operatives where chasing in Denver, feel free to read Mild Mannered Businessman or Secret Service Agent or even buy it from Lulu.com.  I donated copies to Allen County Public Library, New England Historic Genealogy Society, Oak Park Public Library, and St Louis County Library (NGS collection).  I have donated my previous books to libraries and historical societies and encourage others to do likewise.

The link to this article is http://genea-adventures.blogspot.com/2015/01/mild-mannered-clerk-or-secret-service.html
©Erica Dakin Voolich 2015