When I wrote about the Thursday Morning Club in Great Barrington, I included quotes from a book that clearly showed this was a interesting active club of women.  One of my readers, Margaret Fortier, a fellow Massachusetts Society of Genealogists (MSOG) member, got to wondering about the Thursday Morning Club.  Margaret did some more searching on HathiTrust Digital Library and found a wonderful article about the club, "Serving the Community, The Work of a Women's Club in a Western Massachusetts Town," in the Town & County edition of The American City, volume 12, pages 483-486, 1915.

Since there never was a copyright, I'm reprinting the article. 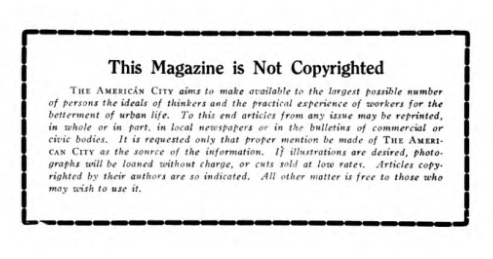 The magazine had altruistic motives -- "make available to the largest possible number of persons the ideals of thinkers and the practical experience of workers for the betterment of urban life." 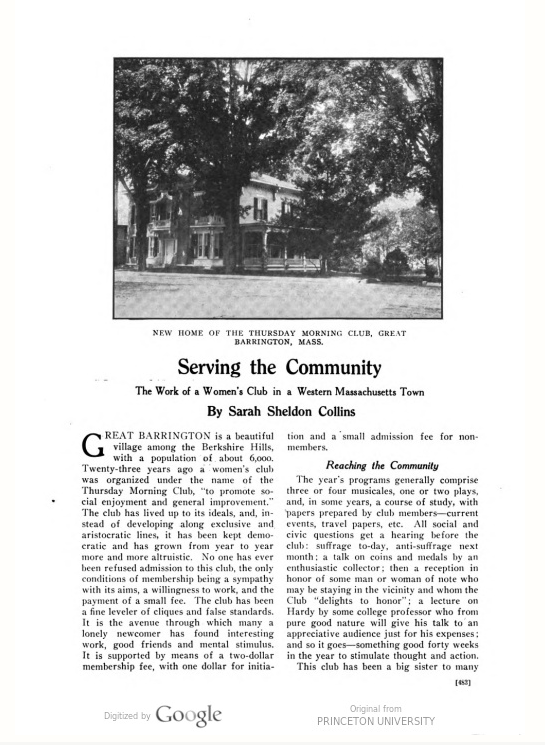 Not only does the magazine have altruistic goals, so does the club.  All it took was a small membership fee (yet no one was turned away), a willingness to work, and sympathy to its goals and you could attend the meetings.  The programs described sound fascinating -- plays, musicals, talks on current events, talks on interesting topics along with service to the community. 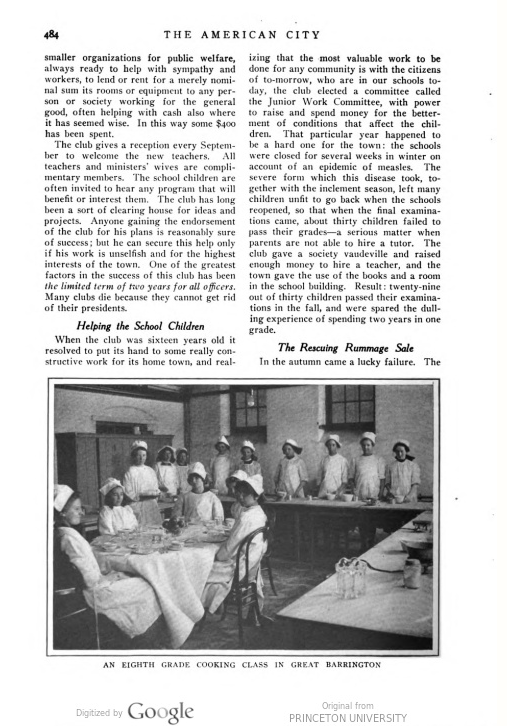 The club also helped other local groups with low rent of their facilities and cash donations when needed.

The club gave honorary memberships to teaches and ministers' wives and had a reception to welcome teachers in September.  They also invite school children to programs of interest.  They worked on projects to help the schools when they saw a need.  They tell about the year that the schools were closed for several weeks during the winter due to a measles epidemic.  There were 30 students who had not caught up by the end of the school year -- they raised the funds to hire a teacher, borrowed classroom space and books, the result: 29 students were caught up by the fall.  They have offered classes that were eventually adopted by the school system -- continuing their financial support of the household arts and sciences and carpentry classes in the transition.

They saw themselves as a clearinghouse for ideas in the community -- their endorsement would "mean something" to community acceptance. 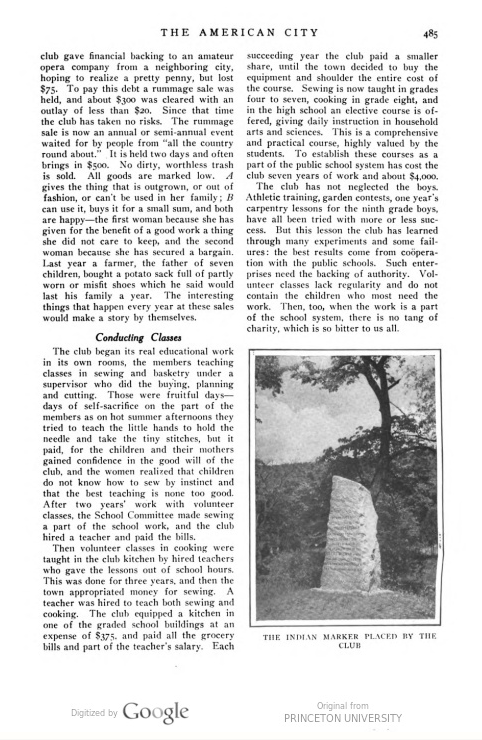 They used an annual rummage sale of "good stuff cheap" as their major fundraiser -- it started to raise money for a money-losing event and continued annually since.

They had various community service activities including picking up rubbish, hiring a tree doctor to care for the elm trees when they were attacked by the elm tree beetle, money saving programs for town children, building floats for the 150th anniversary town parade, and opening a mother's nursing & rest tent (with nurses and doctors available to educate and examine the babies) at the Cattle Show and Fair. 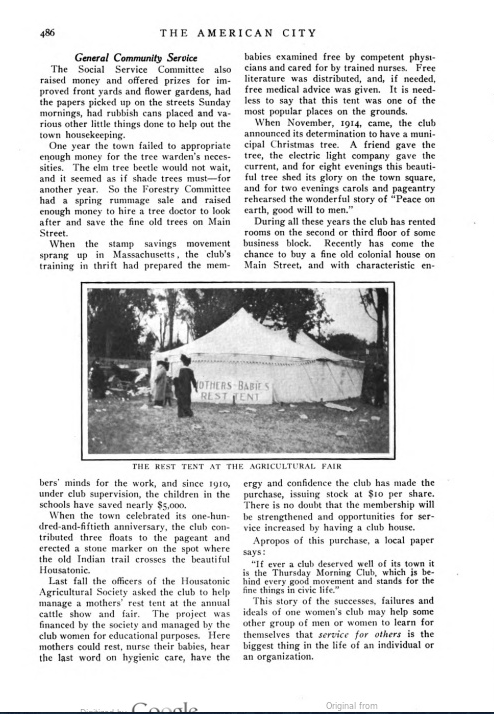 This article was written just before Elizabeth Radford Evans died.  Since Elizabeth lived in Great Barrington from the late 1890s until her death in 1915,  this is describing the Thursday Morning Club that Elizabeth new and participated in their meetings and activities.

We can better imagine what Elizabeth and the women in Great Barrington were doing beyond the everyday housework!


The link to this post is http://genea-adventures.blogspot.com/2014/08/thursday-morning-club-sequel.html
©2014, Erica Dakin Voolich
Posted by Erica at 7:19 AM No comments: 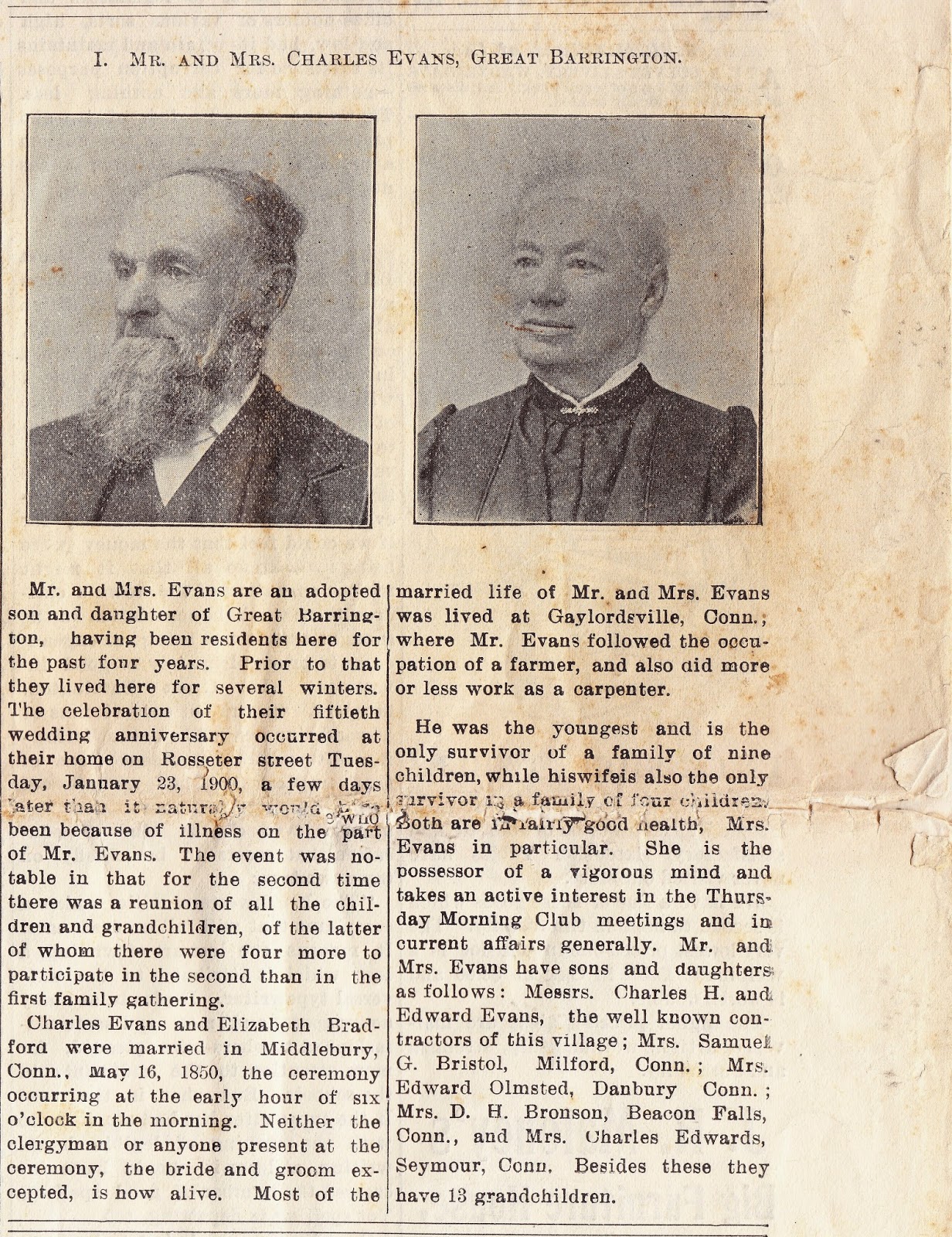