Contrary to my Kids' Assumptions, I'm only 2.1% Neanderthal!

I signed up for the National Geographic Geno 2.0 DNA test.  This one is supposed to be my deep ancestry following back on my mother's-mother's-mother's-mother's, ... line.  I don't have that direct line back any further than my 8th great grandmother, and I've not proved the last couple of those steps, so even that is iffy.  The ones I do have of those generations were in Connecticut and Massachusetts -- so there is some hope of records once I have the time to spend on them.  Others lines on my mother's side lead to the Mayflower, early settlers of New Amsterdam, and Northern Ireland.

Before doing genealogy, I always assumed I was "Heinz 57" variety, probably from many things mixed together, not like my husband who had four grandparents from what is currently Croatia.

So when I got my results, my deep add-mix looks like this:

They have been taking samples from people around there world and using it as reference populations.

According to the Genographic Project, my DNA compares most closely to the British (UK) population:

and next the German population:

It appears to me that I'm closer to the German population mix and than to the British, when I look at the graphs.

Since my maternal folks that I know about came on the Mayflower to New England, or settled New Amsterdam in what is now NYC, or went to Canada in the early 1800s from Ireland (probably northern), the match of my ancestor's is not surprising here, when described above and with the yellow parts of the Heatmap below.

The Geno 2.0 project also included what they call their "Heatmap for U5B"  since my Haplogroup was U5B2B. It shows the path out of Africa of my most distant ancestors and the part that is deepest red is where most of their descendants seem to have shown up: 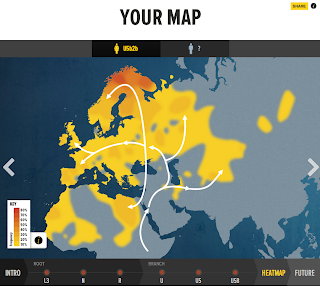 Since this is on my mother's side, and not my father's (we can't trace my father's DNA  since neither he nor my brother is alive), I was surprised to see the red -- that is what I would expect to find as red if my father's DNA were traced -- I've got my father's tree back to the 1600 and 1700s in Sweden.  So I guess those folks before me in Northern Europe headed south before heading west to the north american continent.

Now, for my children who are always trying to get their mother into first the 20th and now the 21st century, here is that Neanderthal piece I mentioned:

I suppose I should remind them that if their mother is a Neanderthal, so are they!

One of my Irish Ancestors WASN'T Dropped in Haviland Hollow by Aliens!

For years I've been looking for Mary Hearty who I knew was born in "Parish of Creggan, County Armagh the town land Dorsy," Ireland (if the handwritten note on the back of her 1849 marriage certificate is to be believed).  But how she got to Haviland Hollow where she lived and married Eric Helsten on 12 August 1849 (if the front of the minister's marriage certificate is to be believed), has been one of those "little mysteries" in life.

I had begun to wonder if an alien space ship had dropped her off in Haviland Hollow, New York because I could never find her on any passenger lists.

Then today I looked yet again, and I found on ancestry.com, a "Mary Hart" age 25 indexed as arriving on 17 June 1848 in New York.  Since Mary had told the 1900 US Census that she arrived 52 years earlier, an arrival year of 1848 sure sounded right.

Here is the actual document: 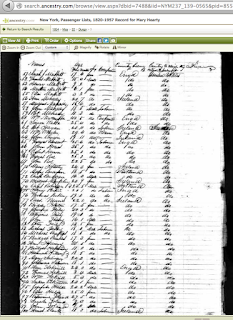 and looking closely at passenger number 70:

It sure looks like Mary Hearty (not "Hart" as indexed) age 26, 3 months (not age "25" as indexed) from Ireland planning to stay in US.

The link to this page: http://genea-adventures.blogspot.com/2012/12/one-of-my-irish-ancestors-wasnt-dropped.html