Fact Checking: Can a Woman Lose her US Citizenship by Marriage?

When searching for something else, a headline in a 1914 newspaper caught my eye:  “AMERICAN WOMEN DENATURALIZED BY MARRIAGE.” 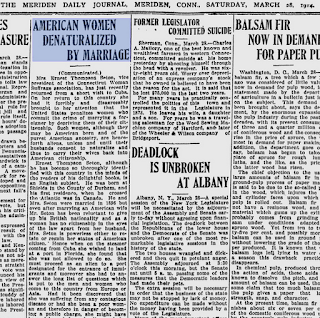 The first two paragraphs:
“Mrs Ernest Thompson Seton, vice
president of the Connecticut Woman
Suffrage association, has just recently
returned from a short visit to Cuba.
On her return to this country she
had it forcibly and disagreeably
brought to her attention that the
United States penalizes women who
commit the crime of marrying a for-
eigner by depriving them of their cit-
izenship.  Such women, although they
may be American born and of the
purest American ancestry, they are hence-
forth aliens, unless and until their
husbands consent to naturalize and
thus to carry their wives back to into
American citizenship.
Ernest Thompson Seton, although
he has become so thoroughly identi-
fied with this country in the minds of
the readers of his delightful books, is
an English subject.  He was born at
Shields, in the County of Durham, and
his first residence, when he crossed
the Atlantic was in Canada.  He and
Mrs. Seton were married in 1896 but
even after marrying an American wife
Mrs. Seton is powerless either to re-
tain or regain her status of American
citizen.  Hence when on the steamer
coming from Cuba she wished to land
at a port in Florida, she found that
she was not allowed to do so.   She
must proceed as an alien to a port
designated for the entrance of immi-
grants and moreover she had to an-
swer the long list of questions which
is put to the men and women who
come to this country from Europe or
Asia.  Had it been discovered that
she was suffering from any contagious
disease or had she been a poor wom-
an and therefore in danger of becom-
ing a public charge, she might have
debarred from landing and de-
ported--not to her native country, for
that is California--a state where wom-
en are really citizens and have the
vote--but to the country of her hus-
band.”

Quick summary:  Mrs Seton, a resident of US, born in California visits Cuba probably on a vacation.  She discovers on her way home that she is no longer a US citizen because her husband is British.  She can’t debark at the port where she had expected to debark, instead she had to go to the port where aliens were processed.  There she was treated like an alien: lots of questions to answer, physical examination to determine if she had any contagious disease, and determination to see if she were poor and likely to become a burden upon society.  Such a surprise for what was probably a prominent woman who was married to a well-read author.  She had lost her citizenship by her marriage and the only way to get it back was to have her husband become naturalized!  She could have been deported “back” to not her country (USA), but to her husband’s country, whether or not she ever lived there!

[and yes I know California isn't a country, but they had given the women the right to vote before the 19th amendment was passed in 1920.]
When I read that story, I thought of my own great grandmother Martha Elnora Worthington.  She was born in Chicago in 1865; and in 1889, she married Harry Bogart Richardson who was born in Belleville, Ontario, Canada in 1863!  Did Elnora lose her citizenship?  Did Elnora ever leave the country after she was married?   Did Elnora have any difficulties?

Time to Fact check the 1914 newspaper story, then answer the questions for Elnora.

Researching the accuracy of these claims, first brought me to Familysearch Wiki:

Marian L Smith’s wrote two fascinating articles tracing women’s naturalization from 1802 through 1940.  These are in Prologue Magazine. Read the first and click through to the second one.  Relevant to our Mrs. Seton in the above article.

“After 1907, marriage determined a woman's nationality status completely. Under the act of March 2, 1907, all women acquired their husband's nationality upon any marriage occurring after that date. This changed nothing for immigrant women, but U.S.-born citizen women could now lose their citizenship by any marriage to any alien. Most of these women subsequently regained their U.S. citizenship when their husbands naturalized. However, those who married Chinese, Japanese, Filipino, or other men racially ineligible to naturalize forfeited their U.S. citizenship. Similarly, many former U.S. citizen women found themselves married to men who were ineligible to citizenship for some other reason or who simply refused to naturalize. Because the courts held that a husband's nationality would always determine that of the wife, a married woman could not legally file for naturalization.”

Clearly, in 1914, the immigration agents were correct to treat Mrs. Seaton as an alien, she HAD lost her citizenship because he husband had never naturalized.  But, the law eventually changed:

“Happily, Congress was at work and on September 22, 1922, passed the Married Women's Act, also known as the Cable Act. This 1922 law finally gave each woman a nationality of her own. No marriage since that date has granted U.S. citizenship to any alien woman nor taken it from any U.S.-born women who married an alien eligible to naturalization.  Under the new law women became eligible to naturalize on (almost) the same terms as men. The only difference concerned those women whose husbands had already naturalized. If her husband was a citizen, the wife did not need to file a declaration of intention. She could initiate naturalization proceedings with a petition alone (one-paper naturalization). A woman whose husband remained an alien had to start at the beginning, with a declaration of intention. It is important to note that women who lost citizenship by marriage and regained it under Cable Act naturalization provisions could file in any naturalization court--regardless of her residence.”

All of the discussions in Marian L Smith’s two articles are quite interesting and worth reading.  She takes the process and fills in the details of the rest of the story and illustrates it for a variety of women examples.  Interestingly, the rest of the original article about Mrs Seton, discusses some other suffragettes who had this same problem and then talked about junior suffrage league meetings and organizing.

“The era when a woman's nationality was determined through that of her husband neared its end when this legal provision began to interfere with men's ability to naturalize. This unforeseen situation arose in and after 1918 when various states began approving an amendment to grant women suffrage (and which became the Nineteenth Amendment to the Constitution in 1920). Given that women who derived citizenship through a husband's naturalization would now be able to vote, some judges refused to naturalize men whose wives did not meet eligibility requirements, including the ability to speak English. The additional examination of each applicant's wife delayed already crowded court dockets, and some men who were denied citizenship began to complain that it was unfair to let their wives' nationality interfere with their own.”
Back to our Martha Elnora Worthington, born in USA, who married Harry Bogart Richardson, born in Canada.  Elnora was the daughter of a proud member of the Sons of the American Revolution.  Her husband was the grandson and great grandson of United Empire Loyalists.  Did she lose her citizenship by her marriage?  I know her son told stories of traveling to Ontario to visit relatives, so she did leave the country. 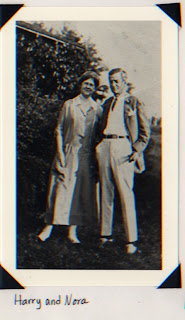 They were married in 1889, according to Familysearch Wiki quoted above:

The key to her citizenship is whether her husband naturalized.  Harry Bogart Richardson came to the USA in 1871 as an eight-year old child.  In the 1910 US census he lists himself as naturalized.  He would have automatically become a citizen if his father naturalized while he was a child and most likely his name would not appear on any naturalization paper, just the father’s name.

I have not successfully documented his  father’s naturalization.  When I contacted NARA, they sent me copies of a pile of cards, all men were named William Richardson and came from Canada in 1871 and lived in Chicago.  There was no way to distinguish which was OUR William Richardson.