Living up to Expectations … or Not!

Imagine a young woman in Sweden in 1867.  Her parents say they can’t keep all four kids because of reduced circumstances.  It was not unusual for her younger siblings to be living with various Hellsten aunts and uncles from time to time when life got tough.
Her father ran a store and a brewery before he went bankrupt. As the oldest child, clearly she worked in the family businesses when she says she was “used to brewing, commerce, and rough work.”
She is 17, the oldest, and decides to take charge of her life. She writes her “rich” uncle in “employer America” where “no one finds fault with one’s honest work” to loan her the money to go there where, as her father says, “hard work and frugality is a way to blessing.”
She is an adult in her mind, independent.
"America here I come!”

Johanna goes to Gaylordsville, where her uncle lives.  A rural town, about 85 miles from New York City.

Fast forward 2 years.
Johanna isn’t satisfied with the life of a domestic servant.
Uncle Eric tries to advise her, but she “just won’t listen.”
Just like a 20-year-old today who thinks she knows everything and won’t listen to her parents, she is not listening to the advice of her uncle who probably feels obligated to act like a parent for his young niece.

Our first hint of a problem was a draft of a letter that Eric wrote to his sister Lovis back in Sweden.
Eric didn’t leave drafts of his letters along with the letters that he saved from his siblings and mother that I used to put together my book, A Ring and a Bundle of Letters.  It would have been wonderful to have his letters with his news and responses to his mother and siblings, but only this one survived. 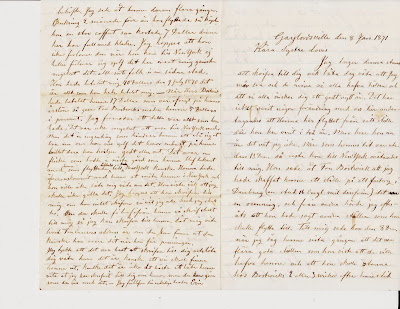 I'm taking this moment to write to you to let you know that I am well and that all of mine have the health, and that we all wish you a good new  year.

Nothing has changed with us here except that Johanna has left the place where she has been for two  years.  But where she is now I do not know.  When her time was up the 13th of Dec. she went to New York unexpectedly to me.  She told Mrs Bostwick that I had found her a position in a factory in Danbury (a town 16 Engl. miles from here) which was a lie, and from others I heard later that she had told them different places that she was moving to.  The 8th of Dec. she told me, when I saw her the last time, that there were several good positions where they would like to have her and that she would stay with the Bostwicks 2 or 3 weeks after her time was up.
I know that she went to New York because a shopkeeper in New Milford went to New York the same day and he had seen her in the steam wagon when he disembarked there. 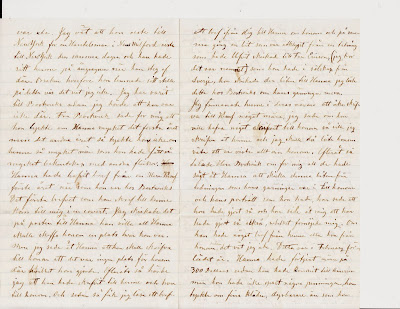 The reason why she left her position in this manner I do not know.  I went to the Bostwicks later, after I heard that she was not longer there.  Mrs Bostwick told me that she liked Hanna very much the first year, but the second  year she did not like her as well, as she had made so many acquaintances with the other girls there.

Hannah had received a letter from a Mr. Kemf in the first year that she was with the Bostwicks.  The first letter that he wrote to her came to me in an envelope.  I mailed it to Hannah, and he wanted Hannah to find him a job where she was.  But I told Hannah to write to him and tell him that there was no position for him, which she did.    Later I heard that he had written to her and she to him.  And then I was allowed to read a letter from you to Hannah about him, and at the same time a piece that was cut from a newspaper that had been sent to  Mrs. Ericson (I think that was the name) that she had company with her from Sweden,  she sent the clippings to Hannah -- I read this at the Bostwicks about his deeds, and more.  I admonished her in their presence not to write to Kemf any more, I said that if she wanted to have anything written to him, then I would like to write for her to let him know that we know everything about him.  Later Mr. Bostwick told me that they had told Hannah to send him the piece from the newspaper about his deeds and his portrait which she had, she said that she had some so, and she told me that she had done so, which pleased me.  If she later had a letter from him, or he from her, I do not know.

Last February Hannah had earned almost 300 dollars since she came to America, but she had not saved any money, she liked pretty clothes, more expensive than she needed.  I talked to her about that several times.  About 2 months before she left she bought a large trunk, which cost about 7 dollars, which she has filled with her clothes.  I do hope she won't lose it when she came to New York and also doesn't lose herself, this has worried me right  much since there are all sorts of people in such a city.  She had paid me 40 dollars the 9th of July 1870, that is all that she has paid me.  --- when Mr. Bostwick had paid her 17 dollars that remained of her yearly pay, Mrs Bostwick's mother gave her 5 dollars as a present.  I expect that this is all she had.  It was not much to go to New York with.  But there is nothing to hinder her to do well if she wants to, it depends only on her, whether she does well or badly.

There was a girl who lived on the next farm that she was acquainted with, who moved back to New York, maybe Hanna had agreed with her to meet her in New York and she did not want me to know about it.  She  probably knew I would not like it.  I hope that she will write to me, if she does not write I will not know what to think.

If you should receive a letter from her so write to me so that I can write to her.  Let me know what Mrs. Ericson's address is if  you can find out, maybe she will go there when she has some money.  I thought it best to write to you to let you know how it is, maybe we will find her out.  Maybe it is better not to let her know I wrote you about her, but you can do as you like about that.

I remain your brother Eric 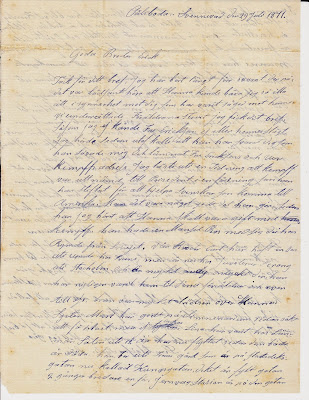 Thank you for your letter, I should have answered it a long time ago.  It was sad to hear that Hannah could behave in such a bad manner especially towards you who has been so good to her.  We informed her parents as soon as I got your letter.  As I didn’t know Mrs. Ericksson or her relatives, I heard later from Kalle that he had answered you as he had promised me and left Mrs. Ericksson’s and Mr Kempfs’ address.

I learned from a paper that Kempfs was made president in a society that he started to help Swedes who arrive in the US.  Could that be something good he’s doing since I have heard that Hanna is supposed to be married to Kempfs.  He brought Miss Bor with him when he escaped from Sweden. ... 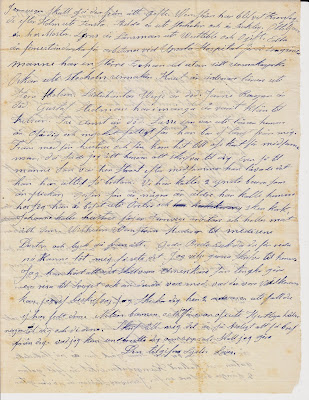 Johanna, age 20, has been rebelling this past year.
Her practical-minded uncle, didn’t want her spending money on fancy clothes; but she did so anyway.
She borrowed money for her passage from her uncle, but she didn’t repay him most of it.
Johanna has run off to New York City without even saying goodbye to the family and lying about where she was going! 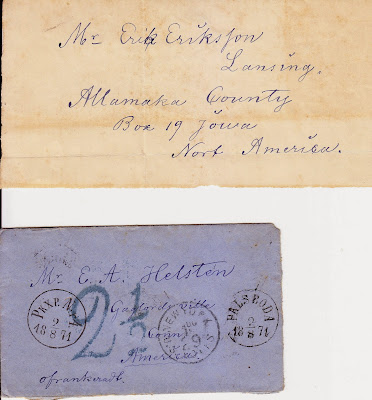 She’s been corresponding with a man, Uno Kempff, that she might have married once she got to New York!
A Swedish family friend, Mrs Eriksson in New York City tried to warn Johanna about Uno Kempff.
Uncle Eric tried to discourage her, practically forbid, this relationship after learning about this Swede — described in Swedish paper for his misdeeds.
Kempff “escaped from Sweden”


What did Kempff do that resulted in his need to escape?

Unfortunately the newspaper clippings didn’t get saved with all the letters!
Remember, they were shown and given to Johanna to convince her of Kempff’s misdeeds!

For  years, this is where the story ended, for me.  I couldn’t find any information about Kempff.  Then last November I received an email from a distant Swedish cousin, Malin Klangeryd, who is also descended from Eric Helsten’s parents, Eric Hellsten (1786-1839) and Lovisa Charlotta Robert (1795-1863).  She was also researching this Hellsten family.  Ironically, she is descended from Eric’s sister Erica.

Malin Klangeryd lives in Sweden and knows how to search the archives.  She has found our mystery man, Uno Kempff.

©2015, Erica Dakin Voolich
The link to this page is http://genea-adventures.blogspot.com/2015/05/living-up-to-expectations-or-not.html
Posted by Erica at 7:37 AM