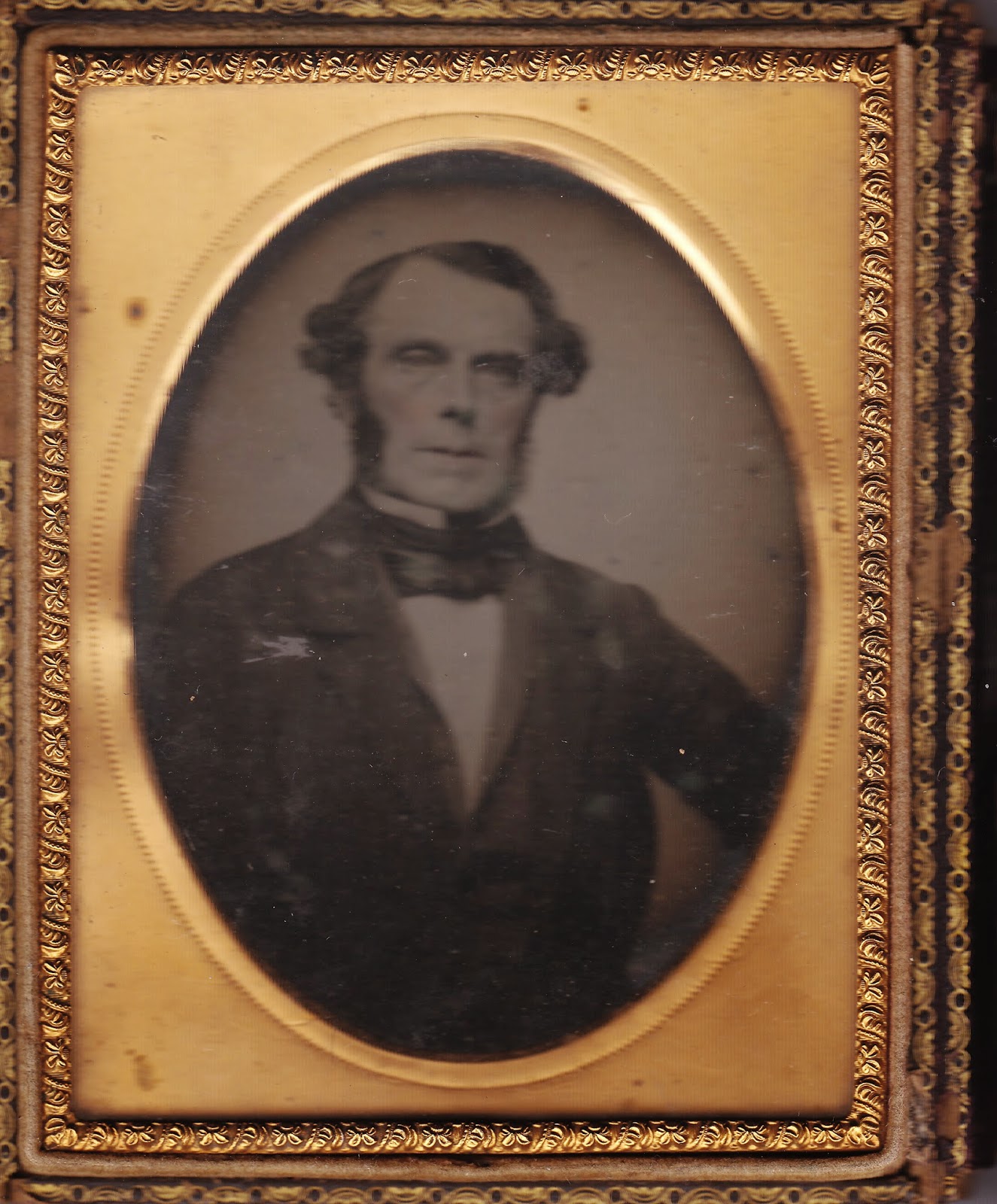 Last month I posted this picture and wrote about it with the caption on the back:

I still not know how Robert is connected to my Richardson family, but maybe the wording indicates that Thomas Richardson married the "well-known of their day" Mary Curtis.

One of my readers from the RICHARDSON roots web list pointed out that there was a Mary Curtis in one of the RootsWeb's World Connect who was married to Thomas Richardson.
Mary Curtis:
b. 9 April 1848 in NYC daughter of Lucien Curtis and Celia Carlton Perkins,
d. 1 Nov 1931, San Francisco
m. Thomas Richardson, 15 May 1869, San Francisco
On 10 February, I e-mailed the person who posted this information, but have not heard back from that person.

Wikipedia has an article about Mary Curtis Richardson, the impressionist painter who married Thomas Richardson from Canada:
Mary Curtis Richardson (9 April 1848, New York City – 1 November 1931, San Francisco) was an impressionist painter and known as the "Mary Cassatt of the West". Her father, Lucien Curtis went overland to the gold fields of California in 1849. The following year, Mary, her sister Leila and her mother went to California via the Isthmus of Panama to join her father and settled in San Francisco.

Her father was a professional engraver and taught both his daughters to draw and engrave. At age 18, Mary went to New York City and attended Cooper Union for two years. She returned to San Francisco and attended the School of Design.[citation needed] In 1869, she married Thomas Richardson who came to San Francisco from Canada and was in the lumber business. He died in 1913. Mary and her sister Leila established a wood engraving studio. Mary dabbled in painting, but friends encouraged her to seriously take up painting full-time.

An impressionist, she painted landscapes but is probably best known for her portrait paintings with a mother-and-child theme. One of her highly praised paintings, "The Sleeping Child" was eventually acquired by the Legion of Honor. Another child subject, "The Young Mother" won a silver medal at the Panama-Pacific International Exposition (1915).

Richardson was a member of the Worcester Group in the 1890s, which met regularly for informal discussions and to socialize under the leadership of Reverend Joseph Worcester (also an amateur architect). Included in this group were artists such as William Keith and Bruce Porter, architects Willis Polk, Ernest Coxhead, John Galen Howard, Charles Keeler and writer Gelett Burgess.

The Rootsweb and Wikipedia Mary Curtis and Thomas Richardson, seem to be the same couple.

Thomas Richardson comes from Canada and is "in lumber."  Not much more information on him -- yet.

But why would my Richardson family have Thomas's father's picture?  Was he a relative?

There is another Robert Richardson, who may or may not be related to my family -- but might be a "colleague" of my William Richardson, so of my Robert Richardson.   Not sure if their paths crossed, but they did both work for the Bank of Montreal in Ontario.

When I wrote the archives inquiring about William and maybe Robert Richardson working for the Bank of Montreal, I received a letter (8 November 2005) listing two people's employment:

William 1854 - 1876: starting in the home office in Montreal and then going to various branches (Cobourg, St. Mary's Waterloo, Goderich) all over Ontario, then to St. John NB, finishing in Chicago 1871-1876 (setting up after the Chicago Fire).  He left in 1876 to start an insurance agency in Chicago.
Robert 1845 - retirement in 1897: Port Hope, Perth, Peterborough, Belleville (all in Ontario).

Based on starting dates, Robert might have been about 10 years older than William.   Could Robert have a son who was married in 1869, possibly born about 1849?  That would mean he had a son Thomas born about 4 or 5 years after he started working at a bank.  It works age-wise.

Would the paths cross for Robert and William?  They didn't seem to work at the same branch of the Bank of Montreal, but possibly they did meet in some professional capacity.  The Bank did seem to move folks around a lot, maybe they did have some training at the home office.

Still wondering why my family would have the picture -- after all, photographs then were not like photographs today where you can get multiple copies of different sizes to send to all the relatives for a relatively cheap price.  I would expect there to be a reason to have a ambrotype (1855-1865) photograph of someone else's relative in the mid-1800s.


The link to this post is http://genea-adventures.blogspot.com/2015/03/more-on-mary-curtis-and-thomas.html
©Erica Dakin Voolich, 2015

"Taken with a Large Grain of Salt"

Take a look at that wonderful family pictured above.
They are the case study for my talk: "Taken with a Large Grain of Salt" -- Verifying Family Stories.

I can tell you that the Richardson family did not make it easy to verify the family stories, but I found success with other records beyond the usual (vital, census, immigration, land, probate, etc.) 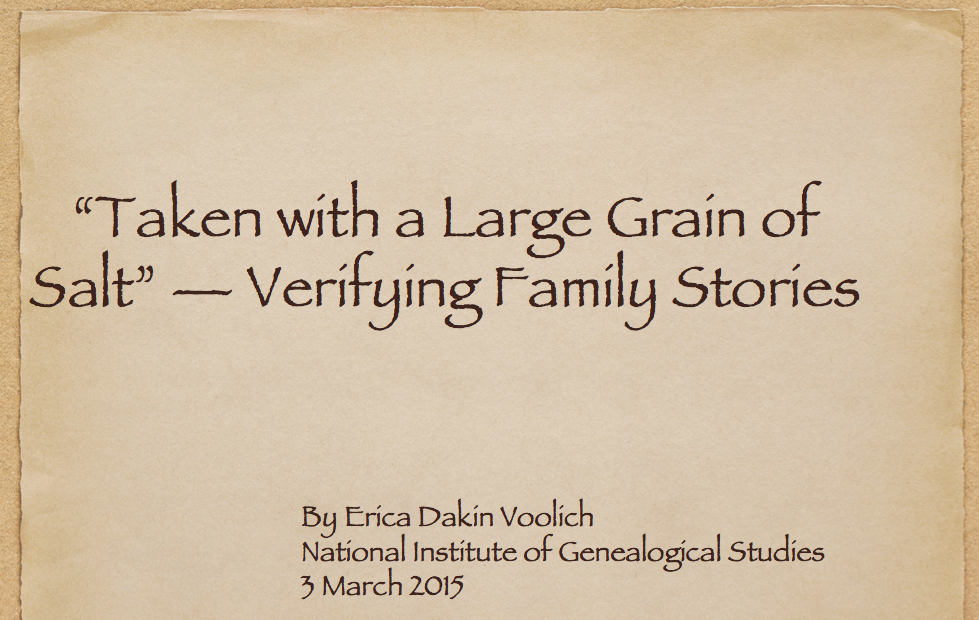 I will be giving a longer version of the talk at the Worcester Chapter of the Massachusetts of Genealogists (MSOG) on Saturday 7 March 2015, at 10 a.m.  Non-members are welcome to attend but there is a $3 visitor's fee.

Here is the sign-in information from the National Institute for Genealogical Studies (NIGS) for the Webinar on Tuesday:

Presenter: Erica Dakin Voolich is an author, blogger and teacher who has transitioned from using her problem solving skills in the mathematics classroom to solving family history problems.

Presentation Description: We collect family stories, but we can't assume veracity. Traditional sources don't always confirm the legend. Doing a case study, we look at other sources to verify the family information.

MEETING LOCATION: http://genealogicalstudies.adobeconnect.com/lecturing/
(NOTE: No user name or password required. Please type in your first and last name; then click "Enter as a Guest".)  Please sign-in about 10-15 minutes early so that you are all ready to start at 2.

I hope you will be able to join me at one of the venues.
Erica