Did Johanna Meet Up with Uno Kempff?

In this series of blog posts, we've been tracking the shenanigans of Uno Kempff, the man that Johanna Hellsten's family considers a scoundrel!  His criminal record in Sweden sure would raise concerns for a loving family for any daughter, not just one thousands of miles away in America.
He seems to have another woman other than Johanna Carolina Hellsten in his life besides his wife, and a possible child born out of wedlock (either his or possibly legitimized by his marrying her mother after years of living together).

Johanna ran away to NYC from Connecticut in 1871.  We found Uno's traveling to New York City in 1874, possibly following his woman friend, Anna Charlotta Carlsson.

I mentioned that Uno Kempff left for New York 17 April 1874.  Looking at the passenger list is revealing!

Look closer at who is traveling with Uno Kempff

A woman named Johanna and that is NOT his wife, Johanna, who is Uno's age.
Both Uno and Johanna's ages are a bit off in this record:
Uno, born in 1826, should be 48.
Our Johanna, born in 1851, should be 23.
What's a few years between friends and before the internet to instantly check!

This is the trip where Uno is traveling to New York City to possibly meet up with his friend Anna Charlotta Carlsson.

When searching the records we have looked for Carolina, Caroline, Hannah along with Johanna -- known names that she used.  When she originally came in 1868, she traveled under the name of Caroline Hellsten -- Eric had alerted the folks at Castle Garden that his niece Johanna Carolina was coming, so they notified him when she arrived, even though she left off that first name.  When home with her family she often just used Hannah.

We do have the mention in the letter from Aunt Lovis that the family has heard that Johanna has married Uno.


Did Johanna Hellsten marry Uno?
She seems to have connected with Uno and traveled with him, but did she marry him?
She wasn't with him back in Sweden when he and Anna Charlotta were living in various places in Stockholm until he died in 1884.
Maybe she pretended to be his wife, for travel purposes!?


What happened to Johanna, if she didn't go back to Sweden with Uno?


All the research for these blog posts was done by Malin Klangeryd in Swedish and by myself in English.  I'm authoring the blog posts, but Malin is contributing mightily to the research!

©2015, Erica Dakin Voolich
The link to this post is http://genea-adventures.blogspot.com/2015/06/did-johanna-meet-up-with-uno-kempff.html 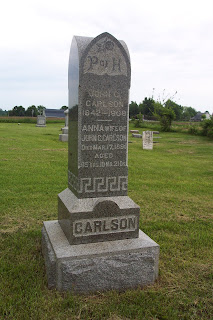 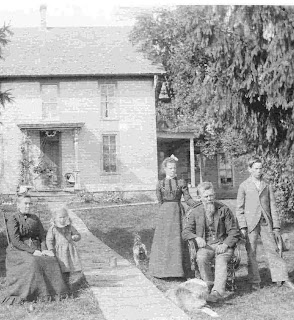 I've posted Chris's comments for  your reading pleasure.
The picture was taken in front of the Carlson family homestead in Clinton Township, Elkhart Indiana about 1900.  That's my great-grandmother, Lizzie - John's 2nd wife - and my grandmother, Anna - his only child - at about 3 years old.  Sitting down is John, of course (lame leg) with step-son Ora Weister and step-daughter Zulia Weister standing.

I go to this farm frequently today to visit the Amish family who now owns it.  My grandma's bedroom is the same as it was 110 years!  I have the little oil lamp she carried up the stairs every night on her way to bed.
The John Carlson tombstone is also in Clinton Township just down the road from the farmhouse.  It is Eldridge Cemetery.  There are about 400 graves in the old cemetery and I'm probably related to most of the residents!!  I just love old cemeteries.  One day a year ago my friend and I photographed every grave!! 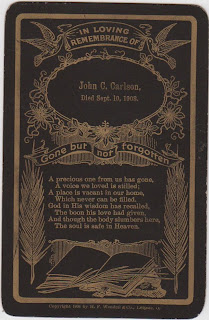