Since I had chosen the HELSTEN/HELLSTEN name for Surname Saturday, I thought it would be appropriate to include the only tombstone picture I have from Sweden. 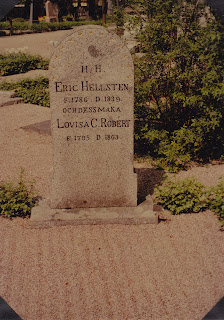 These are the parents of Eric Adolf HELSTEN who came to the US and was the person who employed John CARLSON who I've written about in recent posts.    When I traveled to Uppsala, I stayed with Alice HELLSTEN, the granddaughter of Theodor (Manne) Emanual HELLSTEN.  She died in 1990. 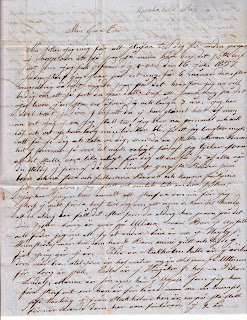 In 1858, Eric Adolf HELSTEN was living in Gaylordsville, Connecticut.  He is married with four children.  His mother, Lovisa Charlotta ROBBERT HELSTEN was back in Uppsala Sweden.

When Lovisa Charlotta was widowed in 1839, her youngest child was 6 months old; her oldest child, was 24.  She never remarried.

Eric left home in 1854 at the age of 22.  Eric was one of 13 children, his mother is reporting on the family for him.  Letters were few and far between.  She does sound like a contemporary mother, wanting to hear from her son!

The original letter was basically one sentence long.  I've added punctuation and paragraphing to make the reading easier.

This was translated from the Swedish by B.B.


Uppsala 16 May [probably 1858]
My dear Eric
Now I sit down to write to you for the second time in hope of receiving an answer to both of my  letters  the last letter I received form you was 16 June 1857 then I wrote a letter to that about 6 months later but I’ve never received an answer to it.  Wherefore I now ask you to receive one as soon as you get this letter I live in a big worry over you and long 3 years.  I have understood from  your letters that you have not forgotten us so I don’t know what I should believe.  I am getting old and infirm and I don’t know how long my time will be I long very much to see you and talk to you so if you should be able to come here it would be very wonderful because I think it would be just as wonderful for you to see us all now when you left us your four youngest brothers were still children and they are now old and grownup men and are now able to earn their own money. 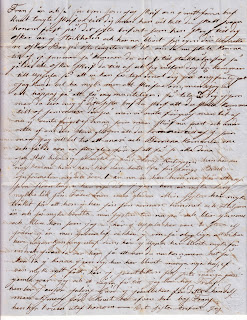 I should probably tell you a little about your siblings.  I don’t have a whole lot else to write about since I wrote my first letter to you at might have happened you never received an answer to it.  Your sister Lovis [Lovisa Charlota] is still in Ulltuna.  Mari [Ingrid Maria] lives in Uppsala and supports herself by sewing for other people.  Lina [Gustava Carolina] is now in Nayby.  Wennström is well they have eight children.  Mini went and lived last year, Jeny goes this year.  Tilda [Matilda Bernhardina] is in Stockholm.  Kalle [Carl Robert] is in Örebro and is well.  Otteljana is with the maternal aunt, now Otteljana is in Ulltuna because Lovis is sick.  Edla is in Vingäker with a squire Lindal.  Manne [Theodor Emanual] is his on own here in Uppsala as I have written about before and he is engaged to Mamsell Sofie Carling from Stockholm.  She is now at  ....  They have been engaged for two years.  Frans is also on his own as I wrote about in my last letter.  Knut thought of writing to you but he wants you to answer his last letter before he writes to  you.  Oskar is in Stockholm is on his own there with a watchmaker.  Oskar lives on Österlångatan #10.  If you should come to see us this summer you will probably come to Stockholm first so go then to Oskar.  Write to us about which day you come to Uppsala so that we can meet you at the steamer.
I could have much more to write about but I hope to be able to talk to you personally this summer, you promised me in your last letter that you would come last summer but we had to wait in vain.  Don’t let us wait in vain this summer.  Now write soon and let us know about the great  happiness that  you will come to  us t his summer.  I suppose that Marie and the children also will come and it would be a great happiness to us to see all of yours.
I sent you greetings from Lars K[?].  He has just come back home.  He has ben away at Finspångs estate as a tutor for a little over a year now.  He is home to rest t hen he will go back there again.  He is very tall and looks a lot like his father but more happy and outgoing.  My sister is having a very hard time because her son is not closer to home and Oteljana is so often away.  My sister is now getting old and not as  healthy as she used to be and as I am. 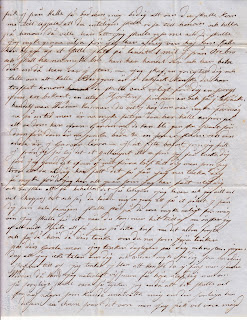 There have been two big fires here in Uppsala this  year.  God be praised we  have not been unlucky and have not any problems from them.  Uppsala has changed a lot since you were here so that if you come now, you would not recognize yourself.  There are man new houses and many new people here in Svartbecken.
There are not many only ones left, just me and a few others.  I live with Frans.  He lives outside Salins farm in Svartbecken on former merchant Nyman’s farm.  Knut also lives with Frans.  He rents one room from  him.  In the last letter I received from Kalle, he asked me to ask you that if you come to Uppsala if you would finally come to visit him.  He would like me to come now and I would very much like to do that because I have never been with son Kalle.  He built a place in the country 10 Km from Örebro and is now supposed to do very well.  He has a store there and he [?] was in town anyway.
I wrote to  you once and told you Kalle Berggren is in New York.  Maybe you have met him.  It would be fun for you there.  He is an acquaintance of Hjorten who is also in New York.  Merchant Werdin, you will remember they were wealthy at one time but they are very poor now.  They have had an auction of everything they own, even the farm.  It can become very hard for them because they’re both old.  One son is in town and the other one is a tanner apprentice. 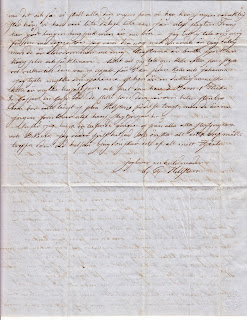 In the last letter, I received from you there was a gold coin that I will thank you for, even as I did in my last letter to you but I suppose you never received it.  I will thank you so much for that I have everything that I have received fro you and I wish to keep it as long a I live.  I wish and hope you promised  me once to send me a picture of you and  your family it out be so nice for me to have that when you come to us.  An I now wish with all my heart to receive an answer to this letter as soon as possible and find out what you’re thinking about and if yo think of your old mother.  I think of you daily and no day goes by without me talking about  you and wondering what you are doing since you never write to us.  Sometimes I  think that you are not here anymore but in the other world.  Then of course I can’t hear anything more of you but if it should be t hat sad there should be somebody that could notify me of the sad event however hard it would be.  But I would have to be satisfied with that we shall all pass that way.  We are not here forever.
We have been ill quite a few of us among the relatives.  Frans has been badly ill in his lungs but is now well.  I don’t want to talk about me because one day I can be well enough but the other day I’m in bad shape.   But that’s my age.  My strength is gone.  My sight is poor.  My hearing is also worse.
I want to say a little about Kalle since they were in Uppsala five years ago with Johanna.  I liked Johanna very much.  She is a clever and industrious person.  Kalle is very careful with money.  They have three children, one girl and two boys --one boy dead.  Their place is called Stenbro [stonebridge].  They don’t live very far from Hellsten’s birth place, but there are now no more living relatives of his.
Now I will send 1000 greetings from us all relatives and acquaintances and wish that this letter will find  you in good health.  I wish that with all my heart.
I live a benignant mother,
L.C. Hellsten

Last February, I was checking to see if anything new could be found on my GGgrandparents Eric HELSTEN or his wife Mary HEARTY.  Eric came from Uppsala, Sweden in 1845.  Mary came from Dorsey, Parish Creggan, County Armagh, Ireland around the same time.  They were married in Patterson, NY 12 August 1849 and moved over the New York/Connecticut line to Gaylordsville, CT.  In 1842, Eric was apprenticed as a tanner in Sweden and so it was not surprising to discover that when he settled in Gaylordsville that he started a tannery in 1853.

I discovered someone else was searching for Eric and Mary.  I was pleased.  I am descended from their daughter Caroline Matilda HELSTEN who married Charles H EVANS. I don't know what happended to two of their four children, Mary Louisa HELSTEN and William HELSTEN.    Maybe one of their descendants was searching.

So I sent a message asking how she was related to Eric and Mary.

However, it was someone NOT descended from Eric and Mary.  It was Chris Finland who was searching her ancestor John CARLSON [Carl Johan Augustus CARLSSON].  John was an orphan who came from Sweden after his grandparents, who had been raising him, died.  John was apprenticed to Eric HELSTEN. Chis has a paper saying that John got a new suit of clothes and $100 for his 7 years of apprenticeship as a tanner and shoemaker.  Chris didn't know anything about John's early years but figured that maybe Eric was a distant relative or family friend who had taken him in -- how else might he have gotten here from Sweden?

John's mother was from just south of Uppsala and Eric came from Uppsala. Chris has been searching for years.  She has found relatives in Sweden, traveled there, and had been working on a family tree for Eric HELSTEN in hopes of finding a connection, anywhere.  No success.

This has led to our working together to see if we can find anything about  John CARLSON and to figure out his relationship to Eric HELSTEN.