John CARLSON, his suit of clothes, and our hunt for information, part 1

As I mentioned in my last post, John CARLSON was to get $100 and a suit of clothes when he finished his apprenticeship.  The family story with this picture is that it is the suit that he received.
John went to Chicago about 1866 or 7, so he must have come to the United States in the late 1850's.

My GGgrandfather Eric HELSTEN had saved all his letters from his family after he arrived in 1845 until he died in 1903.  When my grandmother died in 1974, I found all the letters tied together in a desk drawer.  She never told me about the letters (and what I've learned from them is another story) and I don't read Swedish, so I took the letters home and saved them.  A few years later I worked with a wonderful woman from Sweden, who translated a bunch of the letters.

I spent a weekend reading all of the translations that I had to see if any mentioned John Carlsson.   No luck.  Then I decided to look over the other letters to see if I could recognize the name John Carlsson in the body of any of the letters.  Chris suggested that I not only look for  John, but also look for Johan, Carl, Karl, or Charles.  Those were other names that he went by. 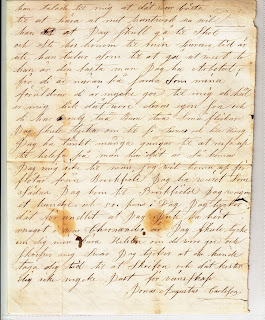 Then I found a letter dated 12 February 1856 from Jonas Augustus Carlsson written in Swedish from Brookfield, Connecticut.  Chris was ecstatic.  Carl Johan Augustus Carlsson was her great grandfather's name in Sweden!  This would put him in the the US two years earlier than she thought he came, but maybe he did come then.

Chris wished she might have some had writing to compare it to, but all she has is a signature from 40 years later.

I scanned the letter and e-mailed it to Chris [isn't modern technology great?] and she sent it to relatives in Sweden to be translated.

A couple days later Chris sent me the translation with a note.  His wasn't her great grandfather!  This Jonas Augustus Carlsson talks of missing his parents and siblings in Sweden, but does comment that life is tougher there so even though it isn't great here, it is better than there.