Death on the Railroad Tracks, the Rest of the Story, part 2


These are the articles that I found on my GGG'grandfather's death that I recently wrote about in Part 1 of Death on the Railroad Tracks: 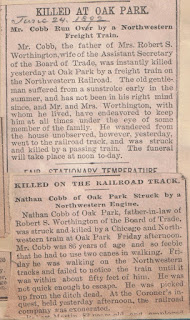 I found this article years ago, then last  year, I saw the rest of the 2nd article which my GG'grandfather had neglected to glue into his scrapbook.  Like other articles of the day, the title only refers to the content of the first paragraph and the rest of the article might not be part of the same story.

Paragraph #2: "Robert Martin, 83  years old, and employed as a laborer at Garfield Park race track, was stabbed in the head ..."

Quite informative: Nathan wasn't only person who died on tracks in that day.  In five paragraphs, we have five different stories of tragedy.  Three people died from injuries that day received on train tracks!

• Frail, elderly Nathan Cobb suffering from dementia, wandered onto the Chicago Northwestern tracks [see part 1].
• The unfortunate Willis Wheeler, who came to town and, as a "colored man," was asked "to move on"-- he got scared and "accidentally" ran into a grip-car.  [The other peoples' race wasn't mentioned in their stories.  Was race an important part of why Wheeler's accident  happened?]
• Nicholas Rickard was killed driving his buggy across the train tracks and was struck by a train and killed instantly.  [Rickard seems to have misjudged how fast the train was coming.]

As a reminder of why so many people were easily injured in the 1890s by the trains and grip-cars, take a look at the corner of Lake and Marion in 1907.  The train tracks are right down the middle of the street.  Can you better understand why Nathan Cobb, Willis Wheeler and Nicholas Rickard all died on 24 June 1892?

Today there is an elevated train on Lake Street.  These tracks weren't elevated at all in 1892!

© Erica Dakin Voolich, 2012
The link for this page is http://genea-adventures.blogspot.com/2012/07/death-on-railroad-tracks-rest-of-story_05.html