When I was growing up, one grandmother lived with us all the time, the other for 6 months of the year.  I don't think I really appreciated all that they did -- for starters, they took care of all four of my parents' children in an era when mothers were expected to be home.  No lunchroom at school: kids had an hour and a quarter to walk home, eat, and return for the afternoon.   She was there to nurture us and feed us every day, 24-7.

∞∞∞∞∞
Adelaide Copeland Harvey was born 3 a.m., 4 November 1893 in Lake Mills, Jefferson County, Wisconsin.  Her birth certificate lists her name as "Miss Harvey" daughter of Joe Harvey and Alice Copeland and siblings of "Riley, Cathy and Copeland."  The doctor recorded the birth the same day but no one ever went back and filled in the name.   She told me she was so sickly as a baby that she was carried around on a pillow -- maybe no one thought when she did live, to go back and tell the town clerk that she had a first name.

Luckily that wasn't as much a problem as I thought it might be when I tried years later to correct her death certificate.  Adelaide H Richardson died 6 August 1971 in Houston, Harris County, Texas, at age 87.  Only, a bit of arithmetic shows that she wasn't 87 but really only 77.  I decided that I should tell the folks in the State of Vital Records office that her death certificate was incorrect.  It took a number of months with notarized letters back and forth, copies of her birth certificate and certificates identifying her parents to finally get her death certificate amended.  Now, if you order a copy, at the bottom, is the "AMENDMENT TO CERTIFICATE OF DEATH" listing her mother's name as "Alice Copeland" instead of "Alice (don't know)" and date of birth as November 4, 1893" instead of "1883" --- type of document: "affidavit of granddaughter..." not mentioning any of the vital records I had sent.

So who was this Adelaide Harvey who married Robert W Richardson?  Definitely more than just someone who was 77 when she died from pneumonia, carcinoma of the lung, with contributing conditions of chronic bronchitis and asthma and carcinoma of the face.  To me, she was "Grawa," the name I gave her when I first tried talking.  She was the person who would always have treats for us children at lunch such as a homemake cake with butter cream frosting or send one of us out to buy one package of Paul Malls for her along with Hersey with almonds or Nutty buddies for everyone -- depending upon the season.

Adelaide grew up the youngest of 4 children.  Her early years were near relatives in Wisconsin.  One day her aunt, Isabel Harvey Wegemann was minding her while making angel food cakes for the church supper.  Addie watched as her aunt carefully separated a dozen egg whites for each cake.  This became an all-day project as Isabel baked a dozen angel food cakes, all for the church supper -- no tasting!  Addie was devastated that she could not even have a little taste.  At the end of the day, Isabel made one more angel food cake for Addie to take home for dinner.  Every year thereafter, her sister Katherine made her an angel food cake for her birthday.  In later years, Auntie Kath would mail an angel food cake and we would look forward to the treat of eating of that very special cake.  It always looked somewhat battered and mishapened, but oh did it taste good.
[Katherine Harvey Rhodes, died 1964]
[Stories told to me both by Adelaide and by my mother] 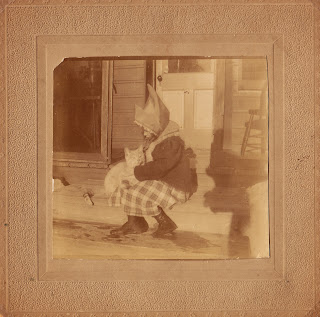 Her family moved from Lake Mills, to Madison Wisconsin so two of her siblings could go to college.  Her mother ran a boarding house nearby while Kath and Riley attended the University of Wisconsin.  Then her family moved to Oak Park, Illinois.  After graduating from Oak Park High School, she married Robert Worthington Richardson on 15 January 1916. 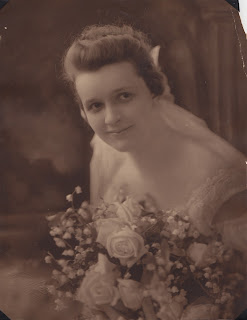 This gorgeous wedding photo belies some of her challenges ahead.  When her second daughter was born, her mother moved in to help take care of the children and then died suddenly.  After her mother's death, depression set in and she was sent to the Kellog Institute in Battle Creek where they thought grains and special diet could cure many ills.  Her two daughters were cared for by her brothers and their wives while she was gone.  There was a comedy movie made about this health sanitarium, "On the Road to Wellville."  Years later, whenever we had popcorn, she always ate hers with milk on it -- "It's a cereal," she'd explain.

She had asthma all her life, I remember her sitting on the side of her bed and wheezing and using her atomizer.  She developed sores all over her face as a young adult.  She saw doctors who never figured out what caused it, one even tried treating it with x-rays.  It think the sores all over her face probably itched.  Sometimes, she'd sit on the side of her bed and clap her two hands on her cheeks of her face.  It wasn't until the early 1950s that someone figured out that those sores were a staph infection, and they responded to treatment.

As a young mother, she developed cataracts in both eyes and ended up having surgery twice.  This was in the days when the patient couldn't move her head for a couple of weeks and would lie in bed with her head sandbagged in place.  Her first surgery was semi-successful, the second was a failure.  So, she lost the sight in one eye from an allergic reaction to the medication.  Not only did she lose her sight, but her brown eye turned blue.

We grew up, knowing Grawa had different colored eyes and didn't see too well with her "good eye."  I didn't stop her from preparing meals, but it did lead to many things dropped.  Whenever she would drop something, she would yell "Nothing fell!"  If my mother was home, she would send a child to "see what nothing is this time."  We had a high-breakage rate for dishes dropped by Grawa, and so the first Christmas when Corning had "unbreakable" dishes, that was the family Christmas present.  My slightly unusual father, loved the fact that Corning would replace any dishes that broke.  When visitors came to our house, Dad loved to ask if they had seen these new unbreakable plates before and he would then "frisbee-toss" a plate to the usually horrified startled guest.

One really cold winter night, I was sitting in the living room and there was a loud crash in the kitchen, "Nothing fell!"  I went out to find Grawa had somehow dropped a gallon of root beer syrup [a Christmas gift from my best friend].  The glass jug hit the back edge of the washing machine, broke and there was root beer syrup going down the wall in the pantry behind and under the machine. While I spent the evening trying to clean it up [we eventually had to disconnect and move the machine to clean it up], my brother was in the basement with my father trying to thaw the frozen water pipes.  Dad came up for a break.  My brother came up and joyfully announced the pipes were dripping.  "If they're dripping, they're leaking and they're broken!"  Dad went downstairs to find root beer syrup leaking through the pantry floor into the basement.

Later in life, Grawa decided to get a glass eye that would cover her blue eye.  Each night Grawa would take her teeth out and put them on the dresser and then take out her eye and put it in an eye cup next to the teeth.  My youngest sister always assumed that's what everyone's grandmother did.  When she put the eye back in, it didn't always line up "just right" and she would need us kids to tell her if she appeared to be looking at the ceiling with one eye.

Early Sunday morning before Christmas 1963, Grawa got up to go to the bathroom and couldn't seem to focus as well with her "good eye."  She woke my mother, "Alice, I can't decide if the house is on fire or if I can't focus" -- I heard my mother yell -- "Ted, wake up, the house is on fire!"  Once outside, my mother was checking to see that everyone was there -- the only one missing was my father. When she asked a fireman if he had seen her husband he replied, "Is he the stark-naked guy inside telling us how to fight the fire?"

The fire chief had told us that the fire had smoldered all night, possibly started by something as simple as a mouse running in the walls--static electricity.  It started in the wall below the fire-break between the basement and kitchen.  It had just broken through the wall into the kitchen and was filling the house with smoke when Grawa woke us.  The chief said if we had slept another 10 minutes, no one would have gotten out.

Thank you Grawa for saving our lives!

The link to this post is http://genea-adventures.blogspot.com/2013/02/i-remember-grawa.html
©2013 Erica Dakin Voolich