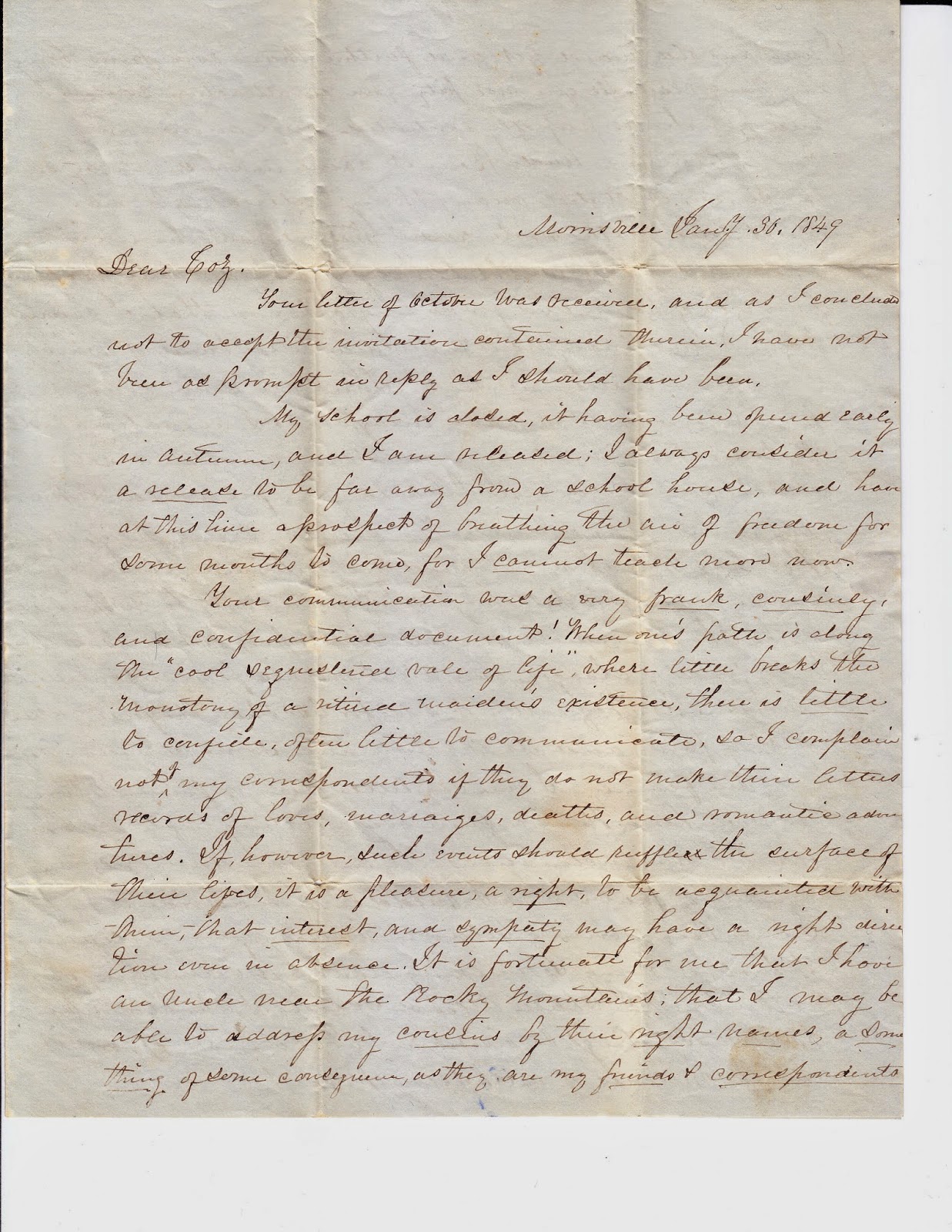 Recall Louise's first letter to her cousins, Elizabeth and Augusta Radford.  She was discussing novels, how schools were organized & teachers certified, and her views as an abolitionist.  She was doing household chores and sewing while her sister was working in a factory, and possibly her mother was recovering from something (alluded to, not said).  Now she is no longer talking theoretically about teaching but she has been teaching, since autumn and the school is closed, possibly for a winter break in Madison County, New York-- could be snowy there.  She has that feeling of exhaustion and relief that teachers have when they get to a break, can catch their breath and get revived to go back again to the intensity of the classroom demands.

Morrisville Jan.y. 30, 1849
Dear Coz.
Your letter of October was received and as I concluded
not to accept the invitation contained therein.  I have not
been as prompt in reply as I should have been.
My school is closed, is having been opened early
in autumn, and I am released; I always consider it
a release to be far away from a school house, and have
at this time a prospect of breathing the air of freedom for
some months to come, for I cannot teach more now.
Your communication was a very frank, cousinly,
and confidential document!  When one’s path is along
the “cool sequestence  vale of life,”  where little breaks the
monotony of a retired maiden’s existence, there is little
to confide, often little to communicate, so I complain
not of my correspondents if they do not make their letters
records of loves, marriages, deaths, and romantic adven-
tures.  If, however, such events should ruffle the surface of
their lives, it is a pleasure a right, to be acquainted with
them, that interest, and sympathy may have a right direc-
tion even in absence.  It is fortunate for me that I have
an uncle near the Rocky Mountains, that I may be
able to address my cousins by their right names, a some
thing of some consequence, as they are my friends & correspondents

Louise depends upon her cousins and friends to write.  If you recall from her first letter, there is a loneliness out in rural up state New York.  Elizabeth has written and made an offer to her last October, possibly to visit based on the comments later in the letter.  She depends upon the news from her correspondents -- it doesn't have to be of love, marriages, romance, death, etc. -- she is still unmarried living at home, as is Elizabeth.  Louise won't marry for another two years, so she lives with her imaginary visits with cousins and friends from elsewhere.  Her younger sister Sarah is already married (1847), as is her older brother Raymond Perry (1848).  Elizabeth's sister Augusta is also married.  She has an aunt in the area, but they are talking of moving from Chautaugue to Pennsylvania-- but just like today, you can't afford to sell your property if it is at a loss!  Uncle Bennet and his family has already moved away, possibly he is the uncle in the Rockies.   She clearly misses time with the various family members including the children.

I am an old maid yet, and farther than ever from being
any thing else.  Do you not pity your unattractive cousin?
and yet she is perfectly contented, never more so.
A long letter from Uncle Bennet came to hand a day or
two since.  It stated many things interesting to me.
The children both wrote, and I am almost homesick.
whenever I hear from them.  I enjoyed under this roof the
privileges of home and for do long a period that I cannot
bear frequent imaginary visits to the dear little band of which
I am now a dissevered link.  There are some young people
there who write to me, and enough that I am attached
to, to cause me much enjoyment in another visit.
I wish you could visit Chautaugue.  You would like
Aunt Sarah and Uncle.  The scenery too is delightful.
He e has his eye now toward Pennsylvania; since Sarah
made a visit to Pittsburgh.  I should not be surprise
if he should remove to some other spot, but he is not
very fond of changes, and Aunt makes few inconsiderate
movements.  They will not sell for less than the full value
of their farm and its location has some disadvantages.
Our family—- I can say little new of them.  Emory
is now home.  He is a green boy.  Nothing influenced him
but his own inclinations.  He will love me only on
condition that I do not meddle nor advise!
I have been wavering between visiting you, attending
school, or doing something else next summer, but
rather than think I shall attend school.  I should like
above most things to visit you but cannot afford it.
Oh the miseries of a shallow purse!


I am not sure what a "green boy" is, but whatever it is, Emory doesn't like his older sister to meddle or advise him-- sounds like their political views might be different (recall, she is the abolitionist).  Definitely sounds like siblings who are a year apart in age.

She is thinking about going to school next summer.  She is asking the advice of her cousin Elizabeth. Elizabeth [much to my recent surprise] attended Mount Holyoke Seminary for the 1844-45 school year and was teaching when Louise wrote her first letter to her cousins!  Clearly she is the person to ask about going to school.  [I have not located where Elizabeth taught beyond Mt Holyoke's records that she taught from 1845-1850, when she married.] 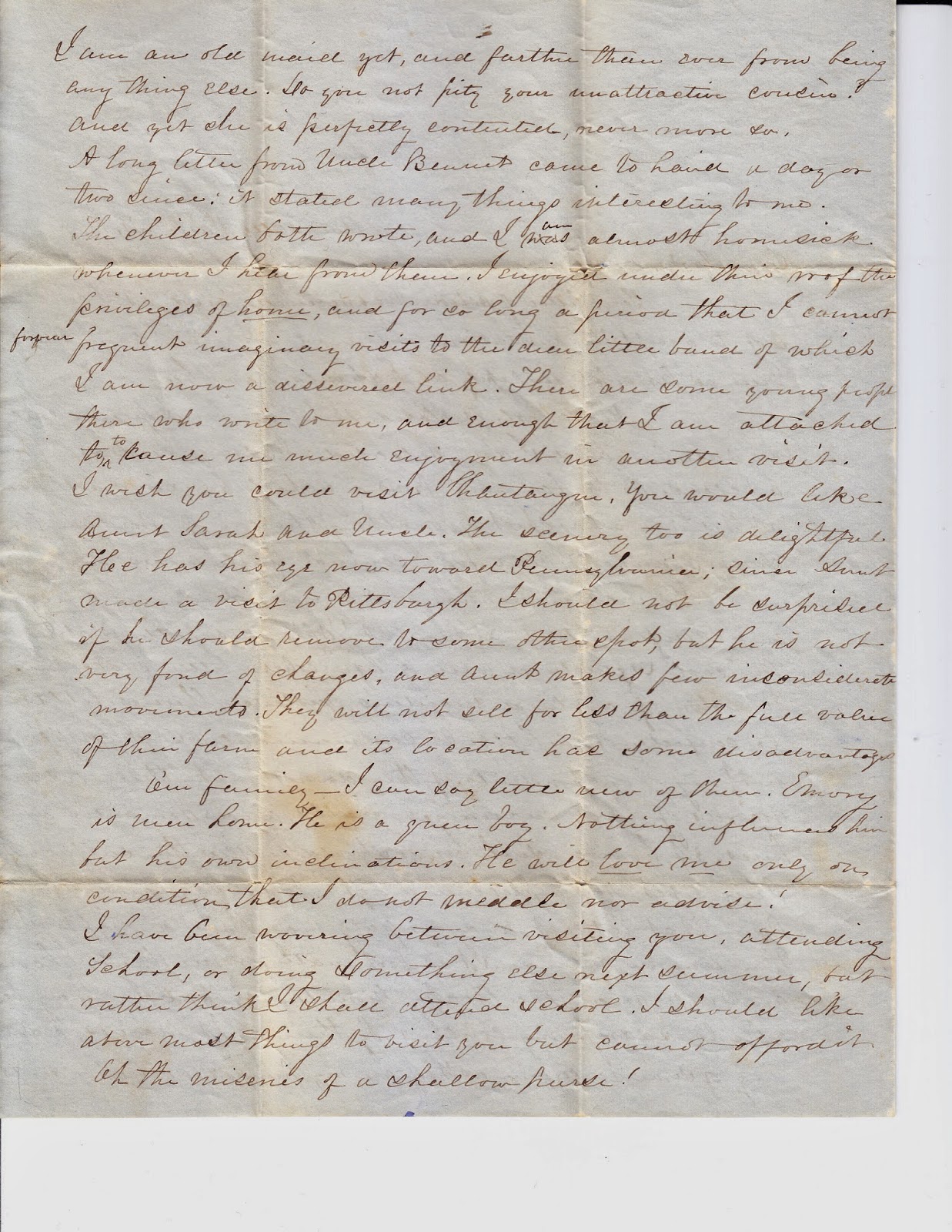 She wishes to visit Elizabeth -- probably that was her offer referred to in the beginning of the letter.  But she can't afford it -- "the miseries of a shallow purse!"  and "I am obliged to limit my gratifications to my income, which is nothing when out of school"

If it were not too much to ask, I should be happy to be
informed of whatever may concern one so distant and dis-
connected as a cousin is.  You do not, nor cannot think
how much I prize the friendship and confidence of my
relatives, and tho’ I never intend to demand the respect
of anyone, yet until I am conceived  of meriting /distrust
I shall expect a continuance of regard.
I am spending the winter in something of a fool-
ish manner but nothing offers for my improvement, and
I am working, reading, and what not.  Enjoying myself
papably, not as well as I did last winter; but an-
ticipating, as I always am great things from the future.
If I could travel, that is all I would ask at present.
I have half a mind to take my destiny by storm. ——
I could do it!  (Ahem! Self Esteem!), but —- common sense
and uncommon laziness suggest other things and tell
me to make myself happy “in life’ more low, but happier
way.”  Lo I suppose I attend school next summer, and
teach next winter.  Hast my suggestions, Coz? —-
Uncle has heard from Cousin Horace.  When I visit you
I shall make him a visitation.  But if I attend school
I shall never go out of the county, for I am obliged
to limit my gratifications to my income, which is noth
ing when out of school.  Give my love to Mrs. Augusta
and Juis whoever he may be as I am bound to return
the love of every one who presents such a gift, Hoping you
will write to me soon I am as ever
Affectionately Louise
P.S. I would write to A. but really — I do not know
her name and do not like dark proceedings.

Cousin Horace, is Elizabeth and Augusta's much older brother.
Augusta married Julius Bronson, who is a widower with a child.
This letter was written shortly after Augusta's wedding, they married 3 January and this is 30 January.
She needs Augusta's married name to be able to write to her.  I do not know what might be the "dark proceedings" maybe it is new husband who is 13 years older and a 13 year old daughter for Augusta.

Oh, how I wish I had the rest of the correspondence between these women! 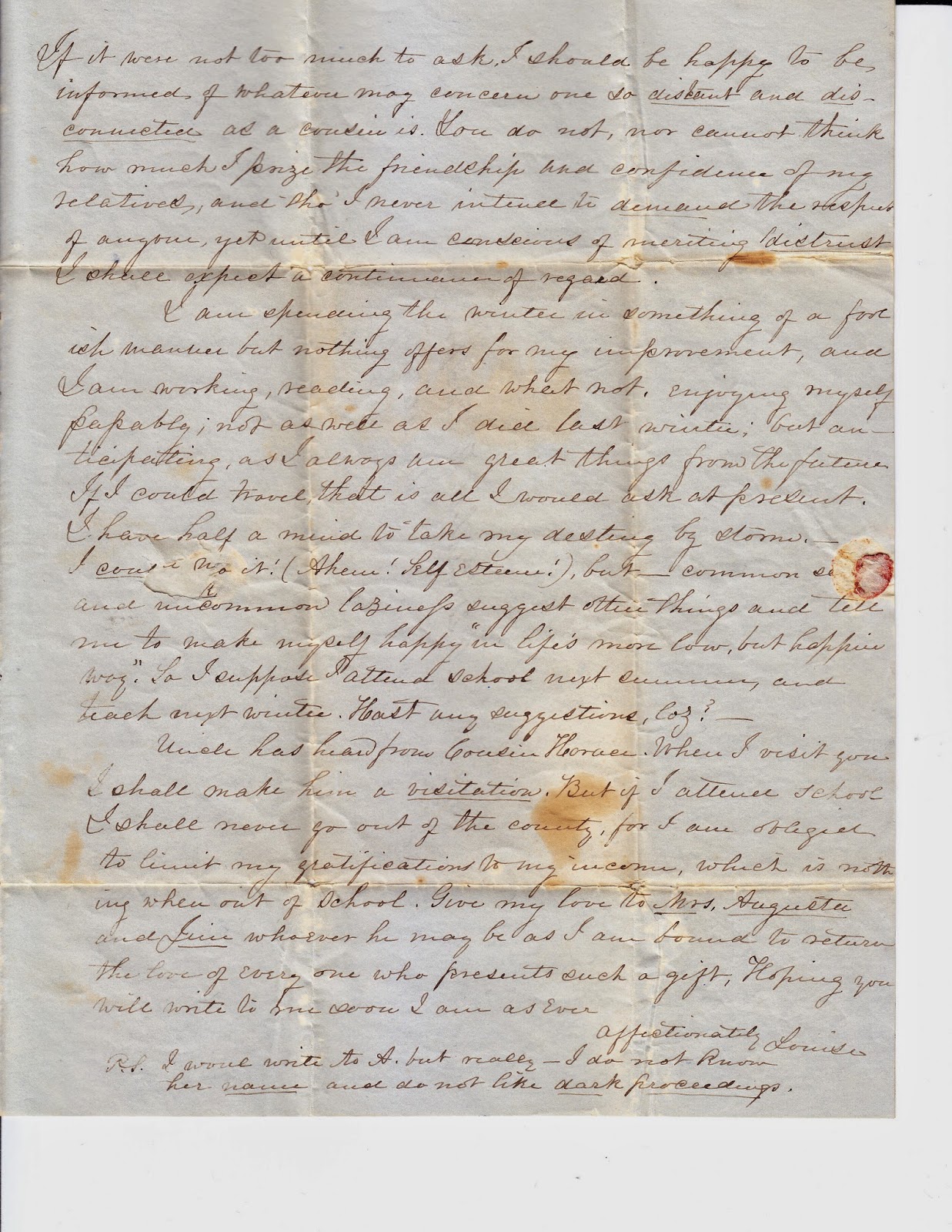