An Unexpected Discovery with the reading of John CARLSON's testimony!

Yesterday, I posted John CARLSON's deposition in the case of John Carlson vs Eric Helsten.  He mentioned that he ran away to Rufus BEEMAN or BERMAN (hard to read).  I checked and there was a Rufus BERMAN in New Milford CT in the 1840 census, but not after and there was a farm laborer Rufus BEEMAN in New Milford CT in the 1860 and 1870 census.  Unfortunately, John CARLSON was in the area between census taking so I couldn't confirm for sure, but I suspected that he went to Rufus BEEMAN.

Then I got some excited e-mails from Chris.  I'll let her finish today's post:

As so often happens in my genealogy research, I go searching for one thing and find another.  It’s happened again!! My Swedish Great-grandfather, Carl Johan Augustinius Carlsson, aka John C. Carlson, somehow found his way as a 14 year-old boy to Gaylordsville, CT from Ödeshög, Sweden in the late fall of 1858. He knocks on the door of the tanner Eric Helsten, himself a Swede.  According to my family records John is then bonded to Eric for 7 years and learns tanning and shoemaking.
After an unsuccessful attempt to find a family connection between young John and Eric, I posted the “tree” I had created on Eric’s family on Ancestry.com and I was soon contacted by Eric’s great-great-granddaughter, Erica. This ultimately led to the most fascinating discovery to date as far as my genealogy.  Erica discovered deposition testimony of John and Eric over some as yet undetermined dispute between them.  The insight into my John’s 7 years in Connecticut is priceless!
Now to the most unusual discovery of all.  At some point during the dispute between John and Eric, John runs away and ends up at the door of Rufus Beeman near Gaylordsville.  According to Beeman’s testimony in the deposition, John then stays with him for 4 years.
In trying to determine what Rufus’s occupation was, I decided to research his family tree a little.  I ended up on Roots Web and printed out his ahnentafel.  I immediately began recognizing names!!  Turns out Rufus is my 4th cousin 4X removed!!  Good grief!!  Rufus and I are both descended from Nathaniel Parke and Sarah Geer.  This is through my dad’s mother’s side – the Quaker connection in my tree.  I amazingly report my unbelievable discovery to Erica – who then relates that she, too, is descended from the very same line of Parke’s!!  We are distant cousins!!!
I just love genealogy!!!!
Christine Cross Finland
August 25, 2011
Posted by Erica at 8:27 AM No comments: 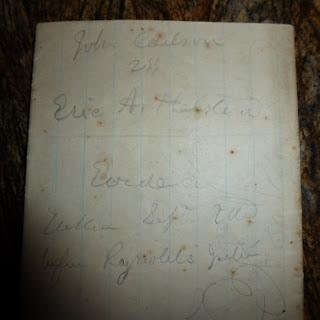 As I mentioned in the earlier posts, John CARLSON came to Eric HELSTEN.  John's  Ggrand daughter had a picture of him in a suit.  Her family story was that John was apprenticed to Eric for 7 years and at the end got $100 and that suit.  Being a good family historian, "listen carefully to the stories and then check it out" led Chris to try to find evidence of John's apprenticeship with Eric.  She traveled to Gaylordsville CT, checked all the records she could find.  How did he end up in Gaylordsville all the way from Sweden?  Was he a distant relative?   Was he a family friend (Eric and John both came come Uppsala)?   She checked the records in Sweden.  No luck any where documenting him in Gaylordsville, in an apprenticeship or connected to Eric.  Then we connected and have been working both directions:  from my records and hers.

I found this deposition in a court case:  John Carlson vs Eric Helsten.  We have not found the court record, just this pencil copy of the deposition.  We don't even know what the case is about.

Here is John's testimony and that of Rufus Beeman:

John Carlson                                  Before Reynolds Justice
vs.
Eric A. Helsten                                    Sept. 8, 1866
John Carlson
I came to this country in the fall of 1858.  I am a Swede.  I came here to work.  There was nothing said.  I want to be …….father for me.  No time mentioned  He said he would like have me stay till 21.  I did not make any bargain.  I was 14 going on 15 when I went there.  I worked 22 months.  I left there 27 Aug 1860, always worked in the tan yard.  When I was sick I did not work.  I had the scarlet fever.  I had Dr. St. John 2 or 3 times.  I had no other time.  I believed I worked all the time.  My foot got hit by falling over the stone wall.  I slipped.  It was in the winter.  I worked all the time.  It pained all the time.  It was a little time after that I told him I wanted a doctor.  I was sent over to see the doctor.  I worked all this time.  He said it let you so far.  It pained me ever since even or less.  He said if he had known he said he thought I run to because I did not want to work.  I could not work this Spring because I hurt my ankle.  He said he would see Dr. Benti.  He said he had not seen him.  I told him I did not wish to dy.  When I left he gave me 85 cents before that he had give 25 cents.  He furnished a pair of boots and one pair of shoes  2 new shirts, brand new mittens, wool hat.  There might have been some old clothes.  I told Helsten I did.  He said he did not know but he would give me something.  I was treated well up to this time.  Later at this time 8 or 10 dollars above the board as before.  I think for a couple of months.
Cross Examination
I think it must have been in the latter part of the winter.  I ……  I think I had the shoes on when I went to the doctor.  I believe the day I was hurt. … Helsten I … He said he would  go and see Dr. St. John when I was in the wood house.  It was the same as before.  It got out of joint when I got out of joint, but I did walk on it.  I went to see Dr. … … 2 times.  I think Helsten bought 2 bottles for me.  I might have more if … …   I told him it pained me the same as before.  We slip as before.  That is the always as before you even.  I was not as lame as when I left the same.  I did not tell Mr. Helsten why I wished to leave   I wore the tighter boots, as before the same you know that you owe but I did not owe him.  Helsten sew months before.  I think he asked me soon afterwards.  I told him I did not know what was the matter.  I came to Jonas H. McMahn soon after Election day.  As before… … …   he said if I would stay he would give me money to go to Sweden.  I may have had some clothing I don’t think of.
Direct Examination Record
He went over to see Dr. and I went that day or the next when we were in the wood house.
Rufus Berman (Beeman?)
I should think John earns at work work faithful for 4-6 dollars per month.  I think the board
it was Mrs. Berman.  I can’t answer the question as to how much work was with his board.
… …  John came to my house in August 1860.  The boy came and wanted to stay all night.  He stayed with me for 4 years.  He was a good boy to work  12 or 15 dollars above his board.  I let him go to school.  Seemed to be very lame in the left leg and hip, as before this runs as you can go.  I called  Dr. Taylor.  He did not work for me in the tanning  He worked very well when he came thru  he could have worked.  I could have bound him from 15 and bound then boarded him.  It appeared he was a skilled workman.
There is more testimony to come in another post.
Posted by Erica at 8:30 AM No comments: 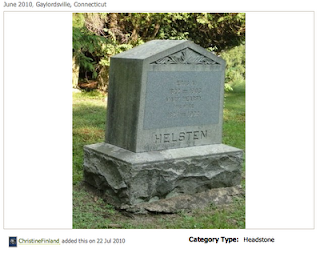 HELSTEN
Eric A
1822 - 1903
Mary Hearty
his wife
1823 - 1902
I have been writing about Eric HELSTEN and his apprentice John CARLSON along with sharing his letter from his mother  yesterday.  I found Chris in her search for Eric and John when she posted this picture of Eric & Mary's tombstone in Gaylordsville Connecticut. All of his family letters have the theme: "I want to see you."

He arrived as an immigrant in the United States on 16 December 1845 from Gavle, Sweden on the Neptunis.  There was discussion in some letters of his upcoming trip in 1858.  I've not found any evidence yet of his having made that trip.  I have evidence of his visiting his family in July 1877 (sailing from Göteborg to NYC on 27 July 1877 and a family portrait taken with all 13 siblings together) and again in 1886 when he was honored at a ceremony as a past winner of a special swimming award.
On 26 August 1835, Eric won a laurel wreath in swimming at age 13.  There was a booklet published about the swimming society UPSALA Simmsällskaps Matrikel.  (1796-1859) that lists the various winners and describes the background of the organization. On 22 August 1886, there was some kind of special anniversary celebration of this race, Eric is listed on the program as Factory segaren E A Hellsten and I have the certificate he was given at the ceremony. 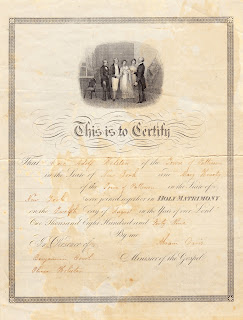 I do not have a lot of information on his wife Mary HEARTY.  I do have a letter from her father which I will post some day.  I don't know when she arrived.  She was born in Dorsey, Parish Creggan, County Armagh, Ireland.  She married Eric on 12 August 1849 in Patterson NY.

How she got to the US, I don't know.  I've not found her in any published records for the US passenger arrival lists in the 1840's.  Maybe she came through Canada and down the Hudson.  I understand a number of companies recruited people in Ireland to settle in Canada to fill the boats going  to Canada (the boats came back filled with lumber).  If there are any immigration records coming into Canada or boat records, I've not found them.  I'll take suggestions on other theories as to how she might have arrived here. 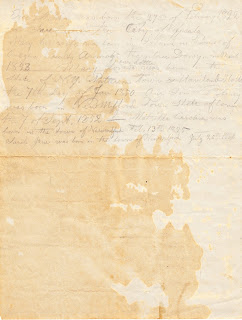 I also have no idea how she supported herself once she arrived before she married Eric.  I have no idea if she came with anyone she knew or set out on her own.  I've never found an official document about her other than her death certificate.  The only reason I know where and when she as born is because it was hand-written on the back of her marriage certificate given them by the pastor, Abram Davis.