Blind Man's Bluff .... Is that What this Scrapbook is Playing with Me?

Ellen Gruber Garvey, the author of Writing with Scissors: American Scrapbooks from the Civil War to the Harlem Renaissance, commented on my first blog post about how she had scrapbooks which were made with all sorts of books that folks might have found discarded or passed along.  In her own blog post about the release of her book, Garvey says:

For many, scrapbook making was a salvage art.  They turned the trash of the newspaper into treasured volumes.  Where did they get the volumes to work with? Not only did they remake newspaper clippings into books, but they remade old books into scrapbooks.  As one scrapbook maker whose family was busy pasting papers in 1873 explained, they were not "using up good printed books" as her visitor accuses her of doing.  Rather "there is nothing in them that we want, and so we propose putting in something, rather than have them stand idle.... Some of them are old school-books, not much worn, but out of date.  Almost every library has some useless books."

So folks were "reusing"  what they considered "useless" volumes!  I'm sure librarians cringe at the statement about the library having some useless books!

She mentioned to me that she had copies in her collection of Patent Books and Congressional Record books as scrapbooks.

The government helped supply nineteenth-century scrapbook makers with useless books.  The hefty yearly volumes the Patent Office issued, included their agricultural reports, were especially popular with scrapbook makers.  They neatly fit two columns per page and looked well on the bookshelf, one scrapbook advice giver explained.  And since Congressmen (all men in those days) sent them out free to constituents, at least in part so their constituents would have that good-looking binding around as a reminder of the Congressman's favor, why not refill the dull contents one's own uses? Thousands did.

Government reports and other thick volumes, such as outdated city directories -- the forerunners of phone books -- lent authority to clipping collections.  An African American janitor in Philadelphia used such directories to past up over a hundred massive volumes mainly concerning black life.  His collection drew admiring comments from newspaper reporters who were pleased to see their own newspaper writing presented in such a dignified form.

So, did the Worthington family consider their copy of the Congressional Record  a "useless book" or did they have a copy for  a reason?  When might they have acquired this Congressional Record?  Knowing when they acquired it might give a hint as to whether there was a reason for their having it beyond a gift from their Congressman who hoped that Robert would remember his largess come election day.

In order to answer the question of when did the Worthingtons acquire the book, I needed to find out when it became available to the public.  You might remember from my previous update, the copy of the Congressional Record that they owned and that Ella Worthington used for the scrapbook was volume 8, part 1, from the 45th Congress.  The date that was visible was 14 December, and it turns out that the year was 1878.  The visible page, 190, was early in the volume and so I wondered how many pages were actually in the volume and what date was the end.  The librarian at "Ask a Librarian" for the Library of Congress was helpful yet again.   It turns out that volume 8 had three parts:
Part 1, 2 December 1878 to 3 February 1879, pages 1 to 928
Part 2, 3 February 1879 to 24 February 1879, pages 928 to 1804
Part 3, 24 February 1879 to 3 March 1879, pages 1805 to 2410

The Library of Congress Librarian referred me to George D. Barnum, the Agency Historian for the Government Printing Office (GPO).  He was very patient with my questions.  He pointed out that

The Congressional Record is published daily when Congress is in session (it is printed the morning following the date on the face).  The bound volumes are issued sometime later, usually after the close of the session Congress.  Daily issues and the bound volumes have separate indexes, since the pagination changes when the bound volume is issued.

On first glance, then some time after 3 March 1879, the volume 8 of the Congressional Record for the 45th Congress would go to press.  How much after?  I can imagine it takes a while to prepare, but I figured I'd ask George Barnum.

At the close of the session, the daily issues would have been re-set (all type was still set by hand at GPO until 1904) for the bound edition.  Unfortunately, I really don't have any information that would tell me in what sequence the volumes might have been printed, or how long it might have taken.  Bear in mind that "going to press" is one step among a great many (editing, indexing, setting type, proofreading presswork, binding) all (except editorial) done here.

Comparing the production of the Record in 1878 with today would be impossible, since virtually every variable from the production of the index to the composing of  type, method of printing, construction of the binding, or the press of completing the work has changed.  The period between the close of the session and the appearance of the the Bound Record volumes varies, depending on how quickly Congress finishes and approves the editing, how big the individual issues are, how long the indexing takes, and what other work is in the plant, etc.  I believe that the lag is about 18 months presently.

George Barnum suggested that I might check with one of the Depository Libraries here to see what their acquisition date is for their copy of this volume.  I did check with Connie Reik, a wonderful genealogist and librarian and Government Publications Coordinator at Tisch Library, Tufts University.  They received the volume in 1898, but they weren't a Depository Library in 1879.  I need to check at an earlier Depository Library to get a sense of when it was distributed to the public.

It is definitely getting later and later for the actual acquisition of this volume of the Congressional Record by the Worthington family.  So, what I thought at first about what Robert was doing as a job back in the early 1870s may not be relevant to the question of why/how they acquired this.  He might very well have acquired this book when he was working as the Secretary to the Real Estate Board of the Chicago Board of Trade.

I shared my two previous blog posts about this scrapbook with George Barnum and he added:
Very interesting post.  Let me add a little information for you.  In those days, it was not at all uncommon for members of Congress to give all manner of publications away to their constituents, and the large numbers authorized in those days reflect that.  Congress authorized 7500 copies of the bound Record for the 45th Congress 3rd session, which amounted to 30,000 actual pieces (they were, according to our annual report, 4 vols. for that session), and practically all of those went to the House and Senate folding rooms for distribution to members.  Members are more circumspect these days, but you wouldn't have had to work too hard to get a copy of the Constitution (printed at GPO) out of one of your Congressional delegation.   In earlier days the popular ones were the annual Agricultural report (later the Yearbook of Agriculture), a big tome called Special Report on Diseases of the Horse that went through a bunch of editions and, obviously, the Record.

So my part 1 of volume 8 was one of 7500 printed, many of which were for distribution to constituents.  Not too rare, but probably one of the few decorated with only gorgeous pictures from Demorest's Monthly Magazine from 1876 to 1882. 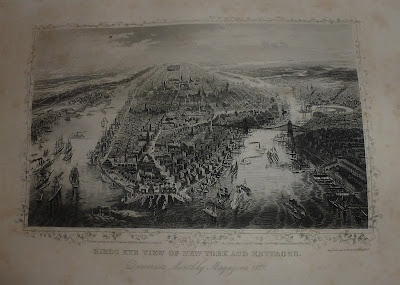 One of the side effects of this research is that I am reading Ellen Gruber Garvey's book, Writing with Scissors: American Scrapbooks from the Civil War to the Harlem Renaissance.  People in the 19th century created scrapbooks to save the information that they had read and to be able to re-read and to share with others.  Whole families might scrapbook -- each member having his/her own.  I know Robert Worthington's two scrapbooks are very different from this book with all of it's gorgeous illustrations.  His started with news clippings of the assassination of Lincoln and then are various articles on things that interested him along with obituaries for family, colleagues at work and some friends.

This phenomenon of using books (and it seems to have been especially common for government documents) as the basis for scrapbooks has quite a history.  Thomas Jefferson did it.  http://americanhistory.si.edu/jeffersonbible/
I think because people got these government documents for nothing from members, they probably had a particular allure.

I remember hearing years ago that Thomas Jefferson "wrote" his own version of the Bible, by cutting and pasting passages from the Bible that he liked and enjoyed.  When I first heard that story, cutting up a Bible sounded almost sacreligious.  Giving it some thought now, Jefferson's Bible was in essence a scrapbook!

©2013 Erica Dakin Voolich
The link for this post is http://genea-adventures.blogspot.com/2013/04/blind-mans-bluff-is-that-what-this.html 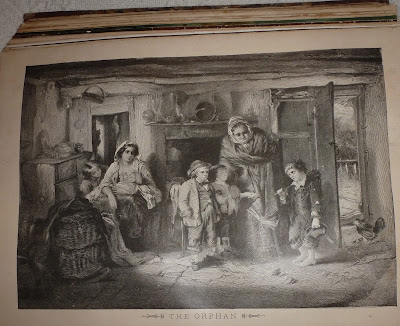