I joined TIARA's annual research trip to Northern Ireland for a week in May searching for the ancestors of Mary Hearty, my great great grandmother. 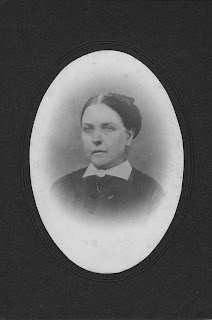 Owen Hearty was the father of Mary Hearty who traveled as a single woman on one of the “coffin ships” bringing Irish immigrants to New York in 1848. She married Swedish immigrant Eric Adolf Helsten in 1849.  They lived in Haviland Hollow NY until they bought a tannery and moved to Gaylordsville CT.  She received two letters from her father (1849, 1851), signed “your father Owen Hearty” and the return address said he was from Dorsey (letters mailed from the neighboring parish Newtownhamilton).  Her marriage certificate says she was born in Dorsey Townland, Creggan Parish, County Armagh. Dorsey is located in the Barony of Upper Fews and Union of Castleblaney.

The above is what is known from information on "this side of the pond."  What can be found in the Irish records about Mary's family?  Some the following,  I determined before my trip and confirmed when in Belfast.

The tithe applotment is a list of farmers.  If he was included in that list, he wouldn’t have been included in the Ordnance Survey taken in 1837 because he didn’t own at least 5 acres [only two properties were listed for Dorsey].

The Griffith’s Valuation was taken in the Dorsey area in 1864.  There are 5 Hearty families listed in Dorsey:  Bernard Herty Sen, Francis Herty, Mary Herty, Mary Herty and Patrick— but not Owen Hearty.  If he were still living and living WITH someone, he would not have been listed because, only the “leasee” was included.

The Cancellation Books update the ownership of the lands listed in the Griffiths.  Dorsey Electorial Division, Union of Castleblayney, Parish of Creggan, Barony of Upper Fews, pages 10, 11 includes the handwritten notations of “(Owen)” after the name Patrick Herty.  It also includes, the second “Mary” crossed out and “Patrick” written above and “(Mary)” right after that.  The crossed out names mean that land was next leased to the person whose name was written above it.  The name in ‘(,)” is an unexplained notation.

Most of the extensive MacGeough Bond family files were not for Dorsey or didn’t included any leases related to Owen Hearty [I don’t know his parents, so don’t know if these two leases apply to Owen — a father, cousin, uncle, possibly.]

It is hard to tell if Owen Hearty married 3 times or if this is three different people.
There was no birth record for Mary Hearty in this parish register.
Parts were very hard to read.  Maybe this wasn’t the part of Creggan Parish that she was baptized.

I checked the Workhouse records for County Armagh and did not find Owen Hearty, Mary’s father in them.

I looked for the school records — none survived for Dorsey when Mary Hearty or her sister Betty Hearty would have attended. The Dorsey description page in the Ordnance Survey said that Dorsey had a National School (1837) which the sisters  could have attended.

The Hearty family/clan has been in the townland Dorsey for many years.
According to the Dorsey page on the Creggan Historical Society’s site, Turlagh O’Heartye was in the 1664 Hearth Money Rolls valuation, and James Herety & Owen Herety were in the 1766 Census of Creggan.  So the Hearty family [O’Hearty clan] has been there for hundreds of years.  Mary and her father Owen Hearty were most likely descendants of Turlagh, James and Owen, but I could not find any connection between the generations.

My great great grandmother Mary Hearty Helsten was the daughter of a poor tenant farmer, Owen Hearty.  We do not know who was her mother or grandparents. We do know she had Garvey and Mooney cousins.  Possibly she had Garvey and Mooney grand or great grandparents along with Hearty grandparents.  But that is unknown at this point.  Unfortunately, as a poor tenant farmer, there is a lack of records.  They were not part of of a wealthy family like the MacGeough Bonds who were the land owners of the small plot Owen farmed and lived on.  That family is well-documented with thousands of pages of family and business records archived at the Public Records Office in Belfast (PRONI).

The few records that do exist for all the folks living and working the land are actually ways to document in order to “tax.”  The Hearth Money Rolls (1664) were to tax folks based on how many hearths they had — taxing for warmth and cooking ability in your cottage!!  The Tithe Applotment Rolls (1828) was valuing the piece of land for collecting tithes for the official church, whether you were a member or not!  I guess as much as my ancestors probably felt unfairly taxed, hundreds of years later, I can be thankful that the officials kept good records!

After a week of searching in the Public Records Office (PRONI) in Belfast, Northern Ireland, my elusive HEARTY and  RICHARDSON ancestors remain elusive.  If you think I don’t know much about the pedigree of my HEARTY family — I know even less about my RICHARDSON pedigree in Ireland!

©2015, Erica Dakin Voolich
The link to this page is http://genea-adventures.blogspot.com/2015/05/that-elusive-hearty-clan.html