In my young-child-mind, my great Aunt Clarice was an older woman who I loved to play with on the two occasions when I visited my grandmother, Marion Evans Dakin, in Connecticut.  I have such fond memories of making a "play house" in the lilac bushes and painting at an easel she had set up in the backyard.  Clarice died tragically from a fall down the stairs on 7 July 1953.  Such a wonderful aunt.

But, was she anything more than just a fun person, a great playmate for a chid to play with?
I've been researching Aunt Clarice.  She was born Clarice Theodora Evans on 21 April 1884 in Sherman, Connecticut, the oldest daughter of Charles Harold Evans and Caroline Matilda Helsten Evans. She wasn't even a month old, when her older brother died at 14 months.  She grew up with a younger sister, and a younger brother.  She graduated from Searles High School in Great Barrington, Massachusetts in 1902. 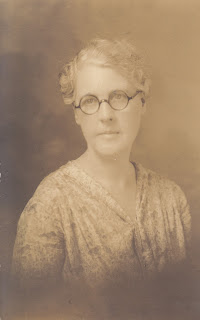 The career opportunities for a woman in the early 1900s were limited.  She taught in the 1st district one-room school in Sherman (and according to her sister Marion was paid $246.50/year as its first teacher).  She went to the State Normal Training School, graduating in 1908.  She went on to graduate from Columbia Teachers college with a BS in 1920 and a MA in 1926.  From what I've been able to find, she taught in a variety of schools in various states, both as a teacher and as a specialist in industrial arts and then in teachers colleges.  Documenting all she did in education surprised me, I only knew of her final job at Jersey City State Teachers College, (1934-1950) in New Jersey and I knew of her teaching at the University of Chicago Lab School for a couple of years starting in 1918.  I am still learning about her career -- filling in the gaps.  She was someone who believed in progressive educational ideas -- children learning by doing.

One treasure I found in my grandmother's desk were letters from Clarice when she traveled to England 1928-1930.  Clarice was not wealthy -- she wasn't traveling abroad for two years on a "grand tour of Europe" -- No, Clarice was traveling to work at a new school, Dartington Hall in Totnes, Devon, England who had offered her £300 plus transportation, and room & board to come for a year.  Dartington Hall was interested in her knowledge of a new area of education -- industrial arts. 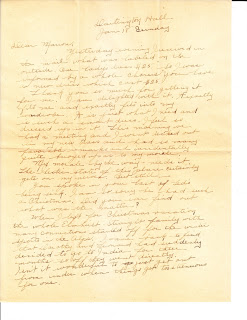 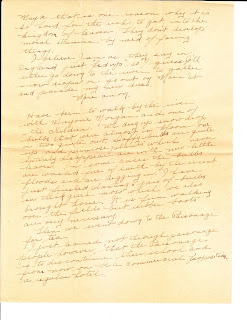 Clarice used her letters to her sister (Marion Evans Dakin), her aunt (Mary Helsten Pomery) and her nephew (Theodore Robert Dakin) as her journal of her trip.   And, Marion dutifully saved most of them for Clarice.    She wrote about her joys and frustrations and observations of daily life.

Clarice wrote about life at Dartington, schools she visited, classes she taught, museums & tourist sites she visited, plays she attended, books she read, artists & authors she met (Darlington was the "in place to be" for well known artists, authors, etc.)-- you name it, she wrote about it.  She frequently mentioned being cold in the English climate and wearing the same suit for most occasions (actually close to daily).  She would write and ask her sister Marion to check out various job opportunities for her upon return -- before extending her stay for a second year.

Clarice was a professional woman who corresponded with other women who she knew from various jobs and her time studying at Columbia Teachers College.    In her letter of 18 January 1929 to her sister Marion, she writes:
Had such a nice letter from Anna Halberg.  Her board which is a congressional committee have made her school into a Teachers College.  They told her that they had never heard of a woman head of T.C. so they planned to get a man and she could stay on as dean.  Since they haven’t the man she is to do all the work.  She is a little sore.

I can only imagine how "sore" Anna is to give up her job to a man, just because she is a woman and the job title has changed!  And, while they look for that man who can do ... well, Anna should do all the work!

I got to wondering if I could find Anna.  This must be a school in Washington D.C. -- where else could Anna be working where a Congressional Committee is the board for a school?  So I did a bit of searching online and found "Anna D. Halberg, 1927 -1931" is the principal of the Wilson Normal School and Wilson Teachers College in Washington D.C.   Looking at Wilson Normal School and Wilson Teachers College in Presidents of historically black colleges and universities 1837-2013, Robert W. Woodruff Library. http://digitalcommons.auctr.edu/cgi/viewcontent.cgi?article=1016&context=hbcupres
I found Anna D. Halberg and her predecessors were all female and "principals;" those who followed, were male and "presidents."

Humm, Anna is the head, doing all the work of the head, but the Congressmen have never heard of a woman as head of a teachers college, so they need to hire a man and 'she can stay on as a dean'. 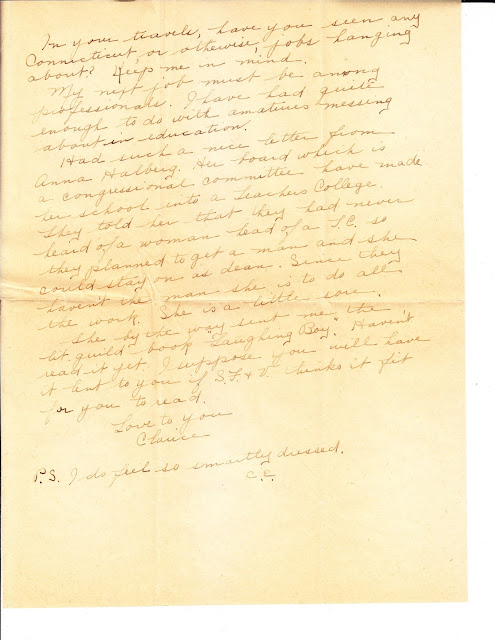 © Erica Dakin Voolich 2016
The link to this page is
http://genea-adventures.blogspot.com/2016/03/clarice-evans-anna-halberg-life-and.html