"Remember the women!" is the famous quote of Abigail Adams to her husband John when he was off setting up the new government for the country.    I don't have any women ancestors who were writing the constitution (there weren't any), but it important for us to "remember the women" in our own family -- even if this is a different interpretation of her phrase!  So today's post is about my mother's grandmother, Martha Elnora Worthington Richardson, a.k.a. Nora, a.k.a. Mattie.  My mother had fond memories of living first upstairs from, and then next door to, her grandparents.

Martha Elnora WORTHINGTON was born in Chicago, 17 November 1865, daughter of Robert Searing WORTHINGTON (1830-1903) and Elnora Esther COBB (1839-1923). Her father Robert Worthington had come to Chicago in 1855 from the family farm in Wisconsin and taken a job as a clerk.  Her mother Elnora Cobb had come from Madison, New York with her parents either late in 1851 or early in 1852.  They married 12 February 1861 and had one child, Mattie.

Her father kept a scrapbook starting in 1865 (see the young man and the President, for an example).  Here is the back cover of his first volume.  The top article is from 5 August 1870 and the ad below is dated "4 Aug 1870."  I suspect these events, which I have transcribed, are linked. 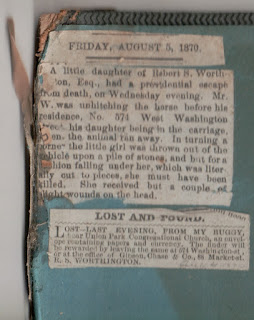 LOST AND FOUND.
LOST -- LAST EVENING, FROM MY BUGGY,
near Union Park Congregational Church, an envel-
ope containing papers and currency.  The finder will
be rewarded by leaving the same at 574 Washington-st,
or at the office of Gibson, Chase & Co., 88 Market-st.
R.S.WORTHINGTON.
[hand written date of Aug. 6 1870]

FRIDAY, AUGUST 5, 1870,
A little daughter of Robert S. Worth-
inton, Esq., had a providential escape
from death, on Wednesday evening. Mr.
W. was unhitching the horse before his
residence, No. 574 West Washington
street his daughter begin in the carriage,
when the animal ran away.  In turning a
corner the little girl was thrown out of the
vehicle upon a pile of stones, and but for a
cushion falling under her, which was liter-
ally cut to pieces, she must have been
killed.  She received but a couple of
slight wounds on the head.


No seat-belts and child "car"seats in 1870!  It was fortuitous, our little Mattie survived her run-away-horse-wagon ride.

After the Chicago Fire, Mattie's parents decided to build a home out in "the country" at the end of the train line in Oak Park.  There she met Harry Bogart Richardson who had come to Chicago from Belleville, Ontario with his family, after the Chicago Fire as part of the rebuilding effort.

Martha Elnora married Harry on 5 December 1889 in Oak Park, Illinois.  When they married, her  parents built a house next door for them to live, affectionally known as "Rotten Manor."  They had two sons, Robert (Bobbie) Worthington Richardson (1890-1951) and Harold Bogart Richardson (1894-1935) who grew up next door to their Worthington grandparents.  And when her mother's parents (Nathan and Elnora Esther Cobb) were elderly, they lived and died there too.  This extended to the next generation when my mother, Alice, and her sister Madelon & their parents moved into Rotten Manor when she was in grade school.  Her father was Bobbie Richardson and her mother was Adelaide Copeland Harvey (Grawa).

One can only imagine the usual ups and downs of childhood in the upstairs apartment in Rotten Manor with two girls and a bulldog named Mark that my mother had brought home from the schoolyard.  The vet cleaned it up and by it's license traced it back to it's original owner in Springfield, Iowa (the dog had jumped out of their car and run away when they were on a trip).  The old owners allowed the new family to keep the dog.

The envelop on the left is addressed:
For
Alice Jell Richardson, Girl Skoot.
From The Society Eddytor
of THE ROTTEN MANOR BULLYTIN.

Inside was the following news bulletin! 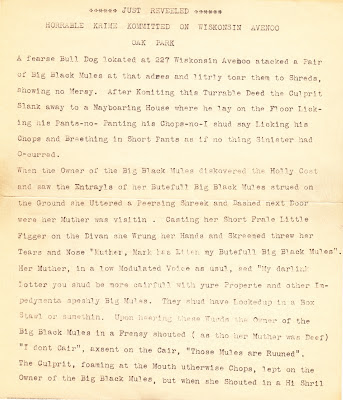 ******JUST REVEELED ******
HORRABLE KRIME KOMMITTED ON WISKONSIN AVENOO
OAK PARK
A fearse Bull Dog lokated at 227 Wiskinsin Avenoo atacked a Pair
of Big Black Mules at that adres and litrly toad them to Shreds,
showing no Mersy.  After Komiting this Turrable Deed the Culprit
Slank away to a Nayboaring House where he lay on the Floor Lick-
ing his Pants-no- Panting his Chops-no-I shud say Licking his
Chops and Breething in Short Pants as if no thing Sinister had
O-curred.
When the Owner of the Big Black Mules diskovered the Holly Cost
and saw the Entrayls of her Butefull Big Black Mules strued on
the Ground she Uttered a Peersing Shreek and Dashed next Door
were her Muther was visitin.  Casting her Short Frales Little
Figger on the Divan she Wrung her Hands and Skreemed threw her
Tears and Nose "Muther, Mark has Etten my Butefull Big Black Mules".
Her Muther, in a low Modulated Voice as usual, sed "My darling
Dotter you shud be more cairfull with youre Properte and other Im-
pedymenta speshly Big Mules.  They shud have Lockedup in a Box
Stawl or something.  Upon herring these Wurds the Owner of the
Big Black Mules in a Frensy shouted ( as tho her Muther was Deef)
"I dont Cair", axsent on the Cair, "Those Mules are Runned".
The Culprit, foaming at the Mouth utherwise Chops, lept on the
Owner of the Big Black Mules, but when she Shouted in a Hi Shril 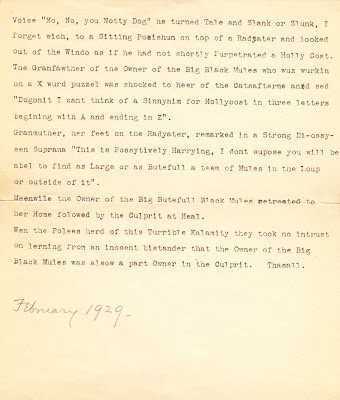 Voice "No, No, you Notty Dog" he turned Tale and Slank or Slunk, I
forget which, to a Sitting Posishun on top of a Radyater and looked
out of the Windo as if he had not shortly Purpetrated a Holly Cost.
The Grandfawther of the Owner of the Big Black Mules who waz wurkin
on a X wurd puzzel was shocked to heer of the Catsafterme ansd sed
"Dogonit I can't think of a Sinnynim for Hollycost in three letters
begining with A and ending with Z"
Granmuther, her feet on the Radyater, remarked in a Strong Di-ossy-
sen Suprana "This is Possytively Harrying, I dont supose you will be
abel to find as Large or as Butefull a teem of Mules in the Loup
or outside of it".
Meenwile the Owner of the Big Butefull Black Mules retreated to
her Home folowed by the Culprit at Heal.
Wen the Polees herd of this Turrible Kalamity they took no intrust
on lerning from an inosent bistander that the Owner of the Big
Black Mules was alsow a part Owner in the Culprit.  Thasall.

Only one press release survived.
This press release must have been special to the girl whose dog chewed up her beautiful black mules -- once she calmed down.  It was found in her personal papers after she died in 2001, seventy-two years later.


For those not in the Chicago area, "the Loop" is the downtown shopping area; and in this case, the grandfather who was told "This is Possytively Harrying" was named Harry.