Elizabeth in her own words!

After thinking of Elizabeth Radford Evans as the silent correspondent who received the letters from her cousin Louise in upstate New York describing the life of an an 1840s woman and
of Elizabeth Radford Evans as an elderly woman, profiled for her memory of multiple presidential campaigns and up to date on current events; we have a few things written by Elizabeth herself which give us a hint as to who Elizabeth was.  She might be busy with the chores of a mother and farm wife, but her mind was working too!

At some point she was in a reading circle.   There is no year included in her minutes for the meeting but the minutes themselves give a hint. 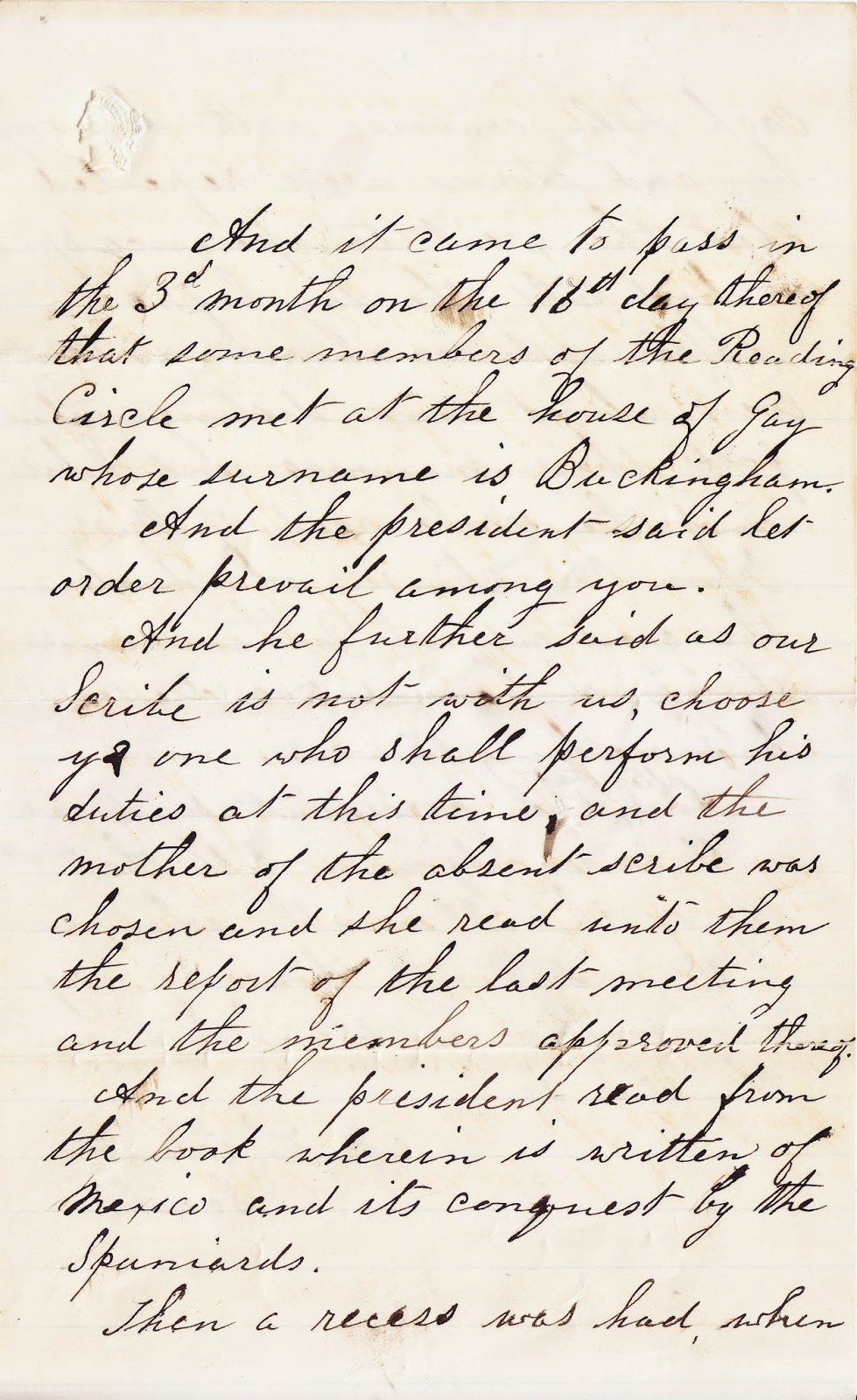 And it came to pass in
the 3d month on the 16th day thereof
that some members of the Reading
Circle met at the house of Gay
whose surname is Buckingham.
And the president said let
order prevail among you.
And he further said as our
Scribe is not with us, choose
ye one who shall perform his
duties at this time, and the
mother of the absent scribe was
chosen and she read unto them
the report of the last meeting
and the members approved thereof.
And the president read from
the book wherin is written of
Mexico and its conquest by the
Spaniards.
Then a recess was had, when 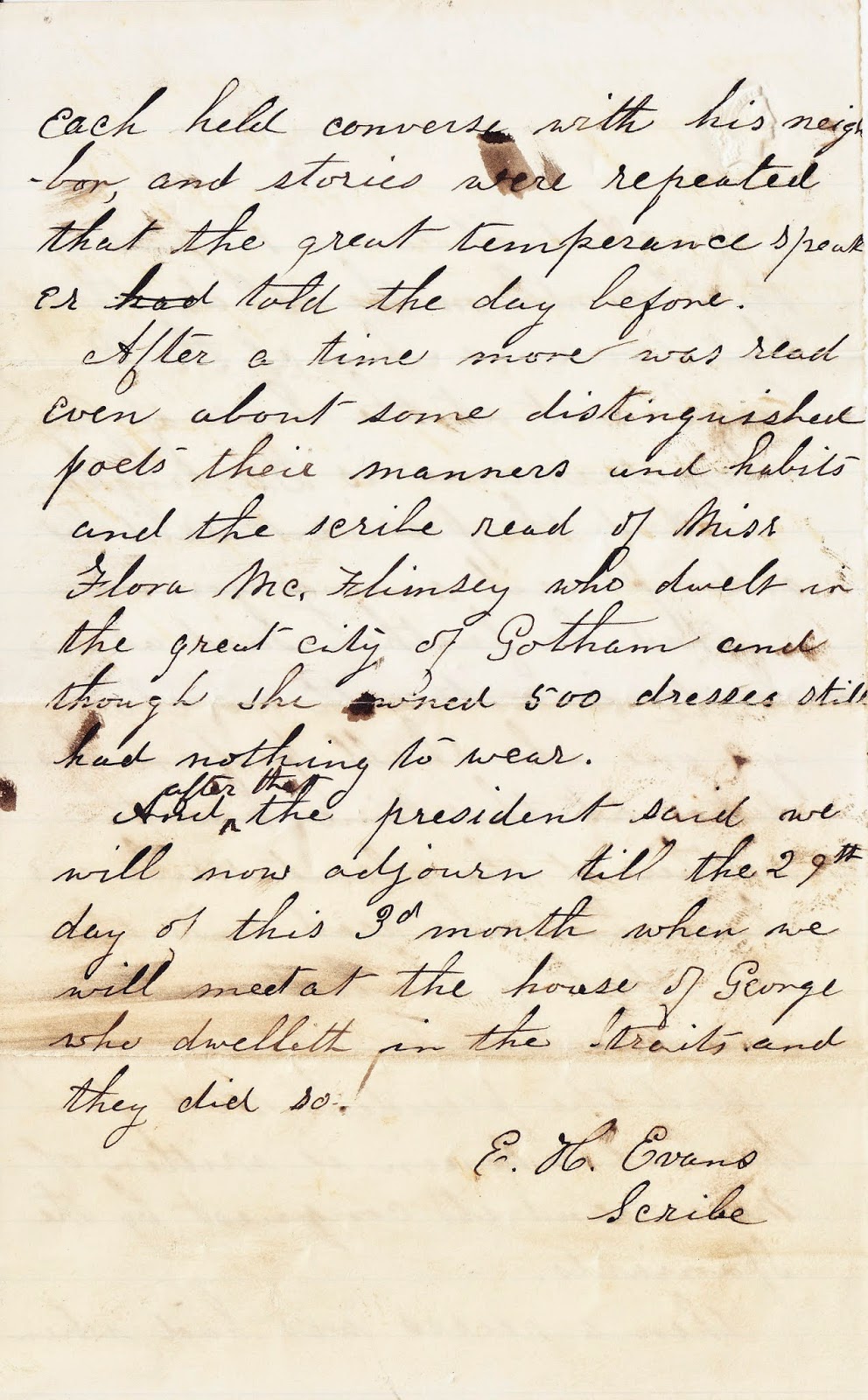 each held converse with his neigh
-bor, and stories were repreated
that the great temperance speak
er told the day before.
After a time more was read
even about some distinguished
poets their manners and habits
and the scribe read of Miss
Flora McKlimsey who dwells in
the great city of Gotham and
though she owned 500 dresses still
had nothing to wear.
And after that the president said we
will now adjourn till the 29th
day of this 3d month when we
will meet at the house of George
who dwelleth in the Straits and
they did so.
E. H. Evans
Scribe

I found a blog post about "the fictional 'Miss Flora McFlimsey of Madison Square' whose complaint was that she has 'nothing to wear.'"  She first appeared in Harper's Weekly in the 7 February 1857 issue.  The blog Secondat (Sunday 17 January 2010), includes the poem and magazine illustrations that date from 1857 to 1863 including Miss Flora McFlimsey.  That poem dates that Reading Circle meeting to that era, when Elizabeth was a mother and farm wife raising children in Sherman -- in 1857, she has two children 6 and 4; by 1863, three children 12, 10, and 4 and yet finds time to go to twice monthly meetings of the Reading Circle.

The family found poems she wrote and transcribed them to share among her descendants by typing them up using carbon paper.


-: OUR WANTS
1 Man wants but little here below
Nor want that little long
Thus Goldsmith wrote long long ago
But this is not my song

2  Our wants are many more than I
In a short time can tell
And if you should not hear them all
It were perhaps as well.

3  A few of our most pressing wants
To you I now will mention
If for a little you will give
To me a slight attention.

4  We want the house of worship here
Where we have met tonight
All covered o’er with coats of paint
To make it nice and white.

5  And to the windows we want blinds
Put up wihen this is done
To help exclude the winters cold
And heat of summer sun.

6 To pay for these we want the cash
Greenbacks both new and old
Stamps of Nationals will do
And silver coin or gold.

7 Kind friends we want that you tonight
Shall give at least a score
Of dollars toward this last great want
We’ll find no fault with more.

8 If with our exercises here
You have been pleased then try
To have the contribution now
Your pleasure testify.

9 But, if your weary of it all
And wished you’d staid away
Call it a humbug if you like
But don’t forget to pay.

Not sure why she was fundraising for a church in New York state, possibly visiting or vacationing. Greenwood Lake is across the Connecticut border and south of Sherman, down on the NY/NJ border.

Poem Written by Grandmother Evans, found on the back of Y.M.C.A. Poster  (no date)

Wake up, turn over, yawn and sneeze
The weathers changed -- my feet will freeze
Oh dear, how thin the blankets are
I wish I had another pair,
But ere I could my wishes tell
In Morpheus arms again I fell
And neer before had such a train
Of dreams passed through a troubled brain.
I thought I wandered all alone
Far northward in the Frigid zone
The cold moon shone on all around
And brightened up the snow-clad ground
And still no sign of life was there
And I was sinking in despair
When my ear, distinctly fell
The tinkling of a distant bell.
and Lapplander with sledge and deer
Upon that snow clad plane apprear
But deaf is he to call and cry
For alike the wind he passes by
And I am left alone again.

Whose turrets seem to touch the sky
Rose to my view -- toward it I pressed
Thinking her to find warmth and rest
But turret high and heavy walls
And spacious rooms and lengthly halls
Were made of ice -- it might have been
The plaything of the Russian Queen.

No more a brilliant throng
Of merry skaters sped along
Now far apart -- now side by side they glide
They move so swiftly and so light I think them spirits of the night I try to flee,
theyre on my track
They overtake and bring me back,
Shivering I wake and leave the bed
With chattering teeth and aching head,
In haste I seek the warmth and light Made by the glowing anthracite.

Waking up on a cold winter mooring and ending with seeking the warmth and light of burning anthracite coal.

Of course she wrote letters, but not many have survived, to my knowledge.

A letter written to Charles from his mother, no year given:

Dec 1
My dear son
One would have thought if you was doing New Haven you would have visited the land of “Your ancestors”  They are in the crypt under the Center church.  Edward has been there--- Alling & his wife and son Fitch Alling-my grandmother was Hannah Alling- married to Timothy Higgins.  There daughter Harriet Higgins married Beers Radford, their daughter Elizabeth married Charles Evans so you see where you come in.
I had written so much when I found my pen was dry so waited till Earl could fill it.  He did that for me though some one else would do it as well.  I dont remember the name of the first Alling neither did Edward so you will have to go to the Center church to find out.
[the rest of this letter is lost]

Here she is giving her son Charles H Evans the information on her ancestors who were settlers in New Haven, CT and where to find their tombs.  Too bad the rest of the letter didn't survive.

In a letter written to her 12-year-old granddaughter Alice Olmstead, she mentions her great granddaughter Marjorie Evans who was born 3 May 1913.  So this letter was written on 3 May 1914, a year and a half before she died:

Sunday PM.
My dear Alice,
It is so good that you can write letter when your mother is busy or has a headache or anything else to hinder her and I was pleased to hear from Newtown as I already am.   It is a lovely day.  I roded down to the street when Edward took your aunt Kathleen to church I don’t go to meeting as it not possible to hear much of the service it tires me to listen so intensely.  I presume E & L.W. & K and the baby have gone for a drive.  It will do Mrs Edward a deal of good.  She has been so confined and it has been such bad going the car has been out only a week but the ground is getting settled now.
While I think of it did your mother find my kid gloves and comb when she was cleaning house I thought they would come from somewhere sometime
Have you sowed Sweet peas yet?  Edward has made no garden at all
Charlie sent me arbutus yesterday and it scents the room
Marjorie is one year old to.day.  I gave her a teaspoon, the boys a fork and her other grandmother a cup and grand mother Smith sent her a dollar.  She is very well but  has only three teeth.
I am glad to hear uncle Alan is away and better.   Of course he will be better if he gets away from old things and friends
something new to think about
Your mother says Wilbur isn’t well.  He ought to work out in school but hates to give it up now this last terms but there is nothing like working out of doors in this season.  So your father is a carpenter that is nice for him.  Your mother washes, irons, bakes and sews as usual making old clothes look like new and I hope her children appreciate all the work she does for them.
There is no news only Wooster has a car so K can go now.  She wanted him to get one two years ago so she could drive it but had their business then.
Love to all,
from grandmother

This letter mentions various children and grandchildren.  Now, one of her children is doing well enough to own a car in 1914, which she mentions casually along with the day-to-day nitty gritty.  She does make a point of telling her granddaughter Alice to appreciate all her mother (Grace Evans Olmstead) does for her and her four siblings.  She is showing her age, 89: she finds the church services tiring and hard to hear, but otherwise, she clearly is still on top of things mentally.

All these writings by Elizabeth adds a bit of humanity.  She is not just the young woman school teacher receiving letters from cousin Louise, or the 88 year-old who has led a long life which she can tell fascinating stories about presidential campaigns (which only one was included in the paper).

Everything in this blog post was shared with me by my wonderful 2nd cousin once removed, Craig.   Thank you Craig!

©Erica Dakin Voolich, 2014
The link to this blog post is http://genea-adventures.blogspot.com/2014/05/elizabeth-in-her-own-words.html