In the late 1890s, Elizabeth and  her husband Charles moved a few miles north to Great Barrington to be closer to their sons who had moved their Evans Bros. construction company north to become the Barrington Builders.

Elizabeth Radford Evans is the woman who was corresponding with her cousin Louise (in the 1840s) who wrote the two letters that I shared in blog posts: Dear Cousins Elizabeth and Augusta and Dear Cousin ... 2 1/2 years later.  If  you recall in the first letter, Louise was talking about her "light reading" of novels by Sir Walter Scott, that her cousin would probably be criticizing her for not reading and keeping up with more important things -- then later in the same letter, she was discussing the evils of slavery and declaring herself an abolitionist.  Louise was keeping up with the world far beyond Madison County New York in the mid-1840s.  Fast forward a few decades, now Elizabeth is an 88  year-old widow, living in Great Barrington, and the local paper interviews her.

“REMINISCENCES.
One of Great Barrington’ Old
Ladies and Some of the Things
She Has Witnessed During Her
Long Life. ---Memory Excellent and
and Interest  Keen for Current
Events.

Mrs Evans, mother of E. B. Evans
of the Barrington Building Co., is
one of those ladies of an old school type
that is fast passing away.  In her
88th year she retains her mental fac-
ulties to a remarkable degree, and
her stories of the days when the na-
tion was young are wonderfully in-
teresting.  She has lived under the
administration of 22 presidents of
the United States, and in the dawn
of the administration of the 23d
president, Woodrow Wilson.  She
was a young girl during the adminis-
tration of John Quincy Adams, and
witnessed some of the exciting inci-
dents attending the canvass of An-
drew Jackson.  On incident she re-
lates was of an ardent admirer of
Jackson crowing over a group of the
adherents of Henry Clay.  He was
riding along in the stage coach when
they stopped near a group of men
digging in the ditch.
“Hurray for Jackson!”  souted the
stalwart Jackson supporter.  Each
man in the ditch grabbed up a hand-
ful of sticky clay and hurled it at the
Jacksonian and shouted in unison:
“Hurray for Clay!”
She has witnessed the campaigns
of Jackson, Van Buren, Harrison,
Tyler, Polk, Taylor, Fillmore, PIerce,
Buchanan, Lincoln, Johnson, Grant,
Hayes, Garfield, Arthur, Cleveland,
Harrison, McKinley, Roosevelt, Taft
and Wilson.
Mrs. Evans graduated from Mt.
Holyoke college in the class of 1845,
and is one of the few members of
that class alive today.  She entered
Mt. Holyoke eight years after its or-
ganization, and when the noted Mary
Lyon, was its president. 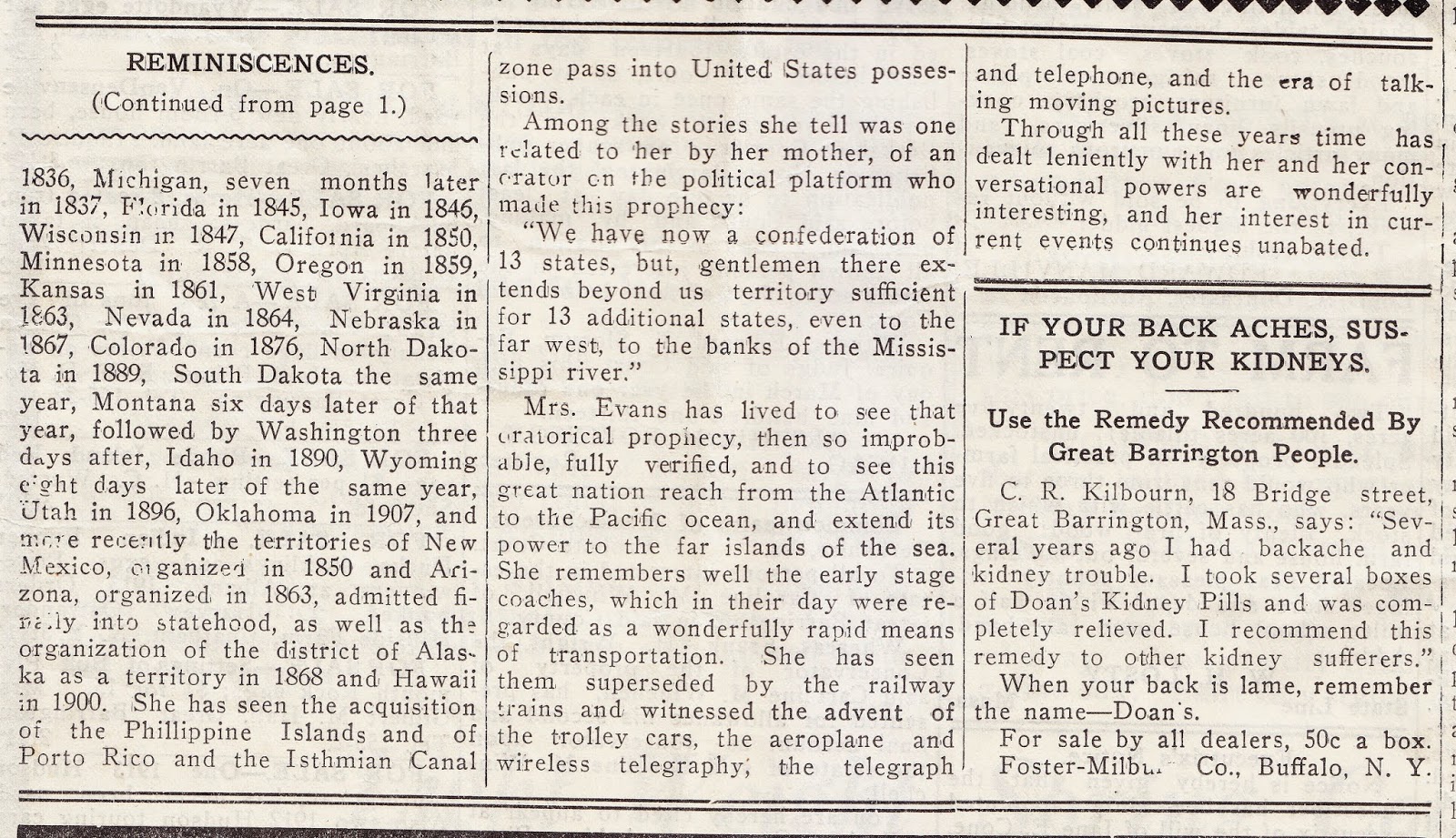 She has seen 23 states admitted to
the union in the period of her long
and active life, namely:  Arkansas in
1836, Michigan, seven months later
in 1837, Florida in 1845, Iowa in 1846,
Wisconsin in 1847, California in 1850,
Minnesota in 1858, Oregon in 1859,
Kansas in 1861, West Virginia in
1863, Nevada in 1864, Nebraska in
1867, Colorado in 1876, North Dako-
ta in 1889, South Dakota has the same
year, Montana six days later of that
year, followed by Washington three
days after, Idaho in 1890, Wyoming
eight days later of the same year,
Utah in 1896, Oklahoma in 1907, and
more recently the territories of New
Mexico, organized in 1850 and Ari-
zona, organized in 1863, admitted fi-
nally into statehood, as well as the
organization of the district of Alas-
ka as a territory in 1868 and Hawaii
in 1900.  She has seen the acquisition
of the Phillippine Islands and of
Porto Rico and the Isthmian Canal
zone pass into United States posses-
sions.
Among the stories she tell was one
related to her by her mother, of an
oratoron the political platform who
made this prophecy:
“We now have a confederation of
13 states, but, gentlemen there ex-
tends beyond us territory sufficient
for 13 additional states, even to the
far west, to the banks of the Missis-
sippi river.”
Mrs. Evans has live the see that
oratorical prophecy, then so improb-
able, fully verified, and to see this
to the Pacific ocean, and extend its
power to the far islands of the sea.
She remembers well the early stage
coaches, which in their day were re-
garded as a wonderfully rapid means
of transportation.  She has seen
them superseded by the railway
trains and witnessed the advent of
the trolley cars, the aeroplane and
wireless telegraphy, the telegraph
and telephone, and the era of talk-
in movie pictures.
Through all these years time has
dealt leniently with her and her con-
versational powers are wonderfully
interesting, and her interest in cur-
rent event continues unabated.”

Clearly for decades, Elizabeth was not "just" a mother of four and a housewife busy with all her chores on a farm in rural Connecticut, she was continuing to keep up with current events as she had learned from her mother (Harriet Higgins Radford 1785-1846) who had also done that.

The big surprise, to me in the newspaper was
Mrs. Evans graduated from Mt.
Holyoke college in the class of 1845,
and is one of the few members of
that class alive today.  She entered
Mt. Holyoke eight years after its or-
ganization, and when the noted Mary
Lyon, was its president.

She attended college!!!  I never knew that anyone in my family had gone to Mt Holyoke Seminary, or that any woman in the family had been to college that early.  I contacted the school archives, and she never graduated, but she did attend college, 1844-1845.

Thanks to my 2nd cousin once removed who mailed me a copy of this newspaper and made this discovery and blog post possible.  Thanks Craig!

©Erica Dakin Voolich, 2014
The link to this blog post is http://genea-adventures.blogspot.com/2014/05/a-news-clipping-surprise.html