When working on an upcoming post on my great grandmother Martha Elnora Richardson Worthington (1865 - 1939), I came across these his and her bookplates. 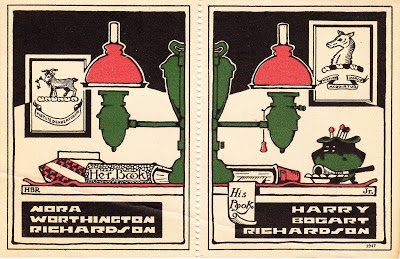 My first reaction was, isn't that nice, "his" and "her" bookplates.  Hers even came with her own name, Nora Worthington Richardson, and not "Mrs H B Richardson" as one might expect for the early 1900s.  The lower right hand corner has 1917, possibly the year they were printed or maybe the order/re-order number for the printer.

I found something odd on each, just above her name is "HBR," his initials.  Above his name is "Jr." and he wasn't a "Jr."

In the back of the scene on each is a "crest" with a Latin inscription.
Thanks to Googletranslate, I know what they say.

©2013 Erica Dakin Voolich
The link to this post is http://genea-adventures.blogspot.com/2013/03/ancestral-power-worthy.html
Posted by Erica at 6:34 PM