A Young Man Runs up to the President-elect ....

The President-elect of the United States travels to Chicago after the election, a  young man runs up to him ...
So what do you think happened to that  30-year-old man who no one knew who he was when he approached the President?

Did the president's body guards, a.k.a. the Secret Service, immediately arrest him?

That young man was Robert S Worthington, my great great grandfather.  He moved to Chicago from Oconomowoc, Wisconsin in 1855 at age 25.  In 1855, he is listed in a Chicago directory as a clerk for American Transportation Co.; in 1859, as a cashier.  In the 1860 Census in Chicago, he is listed as a bookkeeper and living in a resident hotel.  Definitely not a political wheeler-dealer in the world of Chicago and national politics who would be expected to be meeting with the soon-to-be sworn in president of the United States.

Fast forward 140 years, to 2001, when my mother died and I inherited Robert's two scrapbooks.  They are chocked full of newspaper clippings, page after page, corner to corner.  There are interesting articles and obituaries.  I've actually spent time over the years working on making sure I've identified all the obituaries related to the family (some actually led to solving some genealogical problems); and when a genea-friend came to visit, we scanned and she posted information from the others on Find-a-Grave so that people seeking might find the information.


Looking closer at the first page: 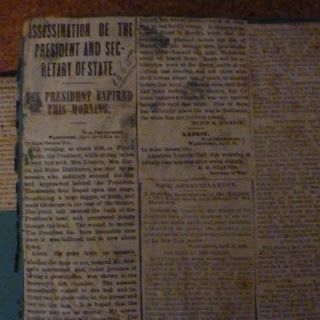 It is an article describing the assassination of the President and Secretary of State, "THE PRESIDENT EXPIRED THIS MORNING" and Robert has added the year 1865 to the page.  This is April 1865, just four and a half years after Lincoln was elected the first time, now he was dead.

Our young man, a month shy of 35, has started his scrapbook with the assassination of the President.  By now Robert is growing up.  He is married, and his wife Elnora is expecting a baby in November.  He works for the freight-fowarding company of Gibson, Chase & Co. and will do so until it goes out of business after the Chicago Fire when he re-invents himself again.

I had assumed that the enormity of the assassination of the president is what spurred him to start the scrapbook, not realizing that he, Robert, a clerk/cashier had actually met the president on that fateful day in 1860, just over four years before.

What I learned a couple of years ago, was that thirty years after Robert's encounter with the President-elect, he told someone the story and it made it into the local paper.  By then he was no longer a clerk/cashier in a freight-forwarding business, but rather the assistant secretary to the Chicago Board of Trade who had supervised the construction of the new building after the Chicago Fire. He worked as the Secretary for the Real Estate Board for the Board of Trade and basically seemed to be a "clerk of the works" managing the details of the construction [finished in 1885].

So, what did happen to 30-year-old Robert when he ran up to President-elect Lincoln back in 1860? 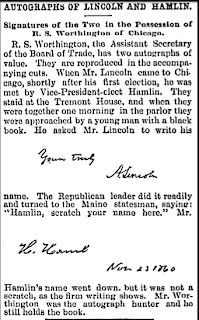 He got Lincoln's autograph!  No one questioned Robert's being there.  My how have times changed.
If someone had run up to Obama in a Chicago hotel, he probably would have been hauled off to jail--definitely not given an autograph.

So, do I have that autograph.  Nope, no idea what happened to that black book.  Never even knew about it until I read it in the paper.  Besides, we all know that everything we read in the paper is correct.