Tombstone Tuesday: A partial answer to a family mystery found in Lake Mills! 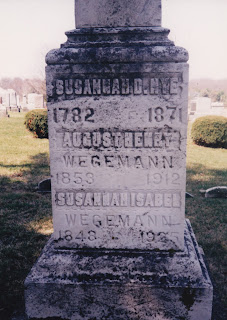 What happened to Susanah DOLE HARVEY after her husband left for Canada "not to return until he could pay his debts" when she was left with at least 2 young children?  Joseph HARVEY never did return supposedly to die in Canada in the War of 1812.  The story of her husband is the topic of another (or many) posts since it is more complicated.

I have found Vermont records for the birth of two children of Susannah DOLE and Joseph HARVEY.  Enoch Dole HARVEY was born 10 January 1811 and Judith Dole HARVEY was born 11 December 1808.  The family story says that Enoch (my GGG grandfather) was "farmed out" to an old family member who was a Deacon (another story here).  I have not verified where he went because this was before the 1850 census where everyone is listed by name.

So, what do I know about Susannah's location?
• Over the years she told the census takers that she was born in Massachusetts or in New Hampshire.  The town history of Bedford NH mentions her birth there as a child of Deacon Silas DOLE.
• She married Joseph HARVEY on 10 September 1807 (VT vital records).
• The 1801 census for Shrewsbury, Rutland, VT includes the Joseph Harvey family with 1 male between 16 & 25 [Joseph], 1 female between 16 & 25 [Susannah], 2 females under 10 [Judith & ??].  So it fits if this is the correct HARVEY family.
• If Joseph left the family after 1810 and probably before the 1820 census (based on family legend and lack of finding him in the census).
Over the years I don't know what happened to Susannah, for example, the numbers don't fit to find her in her parents' household in the following census and she isn't listed as a head of family.
• The 1850 census for an unknown township in Washington VT lists a farmer, Elijah NYE, the grandfather of Enoch's wife Mary Hubbard NYE, with a wife of Susannah.  The family history says he married Mary HUBBARD and she died in 1838.  So I checked the Vermont records and discovered Elijah NYE married "Mrs HARVEY"  on 24 January 1840. Looks like he remarried.   Could thi "Mrs. Harvey"  be my Susannah DOLE HARVEY?  Looks like she got remarried to the grandfather of her daughter-in-law!
• Elijah NYE died in 1852, so where did Susannah go then?
•There is a Susan NYE, age 78, in Aurora, Kane County, IL born in MA in the 1860 census.  Is this the same Susannah?  Why Aurora?  Her son was in Lake Mills Wisconsin at this time.  I have no idea where her daughter was.  She is living with the Justin and Juliet DODGE family.  Is she a boarder or possibly a grandmother?
• In the 1870 census for Lake Mills WI, Susan NYE is living with her son and his family.  Under occupation "In the family" and she is from Massachusetts.
• Horatio Gates book on the McGeoch-Harvey Descent says she died in Lake Mills WI on 3 April 1871.
I didn't find a death certificate for her in Jefferson County WI.

The above tombstone puts her in the HARVEY family plot.  Susannah is buried with her granddaughter Isabel Susannah HARVEY and her husband August Henry WEGEMANN.

This tombstone was a wonderful find on my trip to the Lake Mills cemetery on my tour with my Genealogical Hostess from Heaven, Marie Copeland, that I wrote about in my last post.  I confirmed that she made it to Wisconsin and spent the last few years living with her son Enoch HARVEY.  The details about the years in between, are a bit fuzzy and fruit for some more research.  Does it ever end?
Posted by Erica at 9:24 AM