Remember the Women as we Climb the Family Tree, part 2b 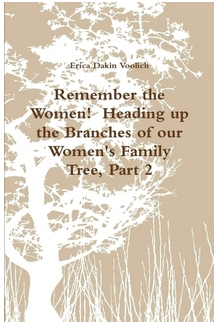 In the other half of this blog post, Remember the Women as we Climb the Family Tree, part 2a, I focused on the first three women who were all from my paternal side.  Now, I'm going to focus on the two women on my maternal side, both great grandmothers of mine.  The first three women all eventually lived in Gaylordsville, Connecticut; these two women eventually ended up in Oak Park, Illinois, neither was born there.


Alice Copeland Harvey (23 February 1860 - 24 April 1921) was born on the Copeland Family Marino sheep farm on the border of the town of Jefferson, Wisconsin.  It was in the early days of settling Jefferson, her father had come out from Bridgewater, Massachusetts and settled on land that his uncle, the congressman John Reed, had purchased.  Another uncle had also come from Bridgewater with a friend to start a shoe company, Copeland Ryder Schools (Jefferson Shoe Company).  She came from a hard-working family with lots of aunts, uncles and cousins -- likewise for her husband.  Alice married Joseph Elliott Harvey from the next town, Lake Mills on 24 October 1879.  He came from a family of seven, his mother died when he was 5 and his oldest sister stayed home to raise him.

Alice and Joseph had four children:  Katherine Mary Harvey (born 22 August 1881), William Riley (born 7 January 1884), Charles Copeland Harvey (born 3 March 1889), and Adelaide Copeland Harvey (born 4 November 1893).  When they were raising their children in Lake Mills there were always plenty of relatives nearby to help with the children or to play with them.  Joseph was a salesman when he worked, and sometimes he had other problems, so life had extra challenges.  When her two oldest, Kath and Riley graduated from high school, they both wanted to go to college.  Kath taught school in Lake Mills, then Alice moved the whole family to Madison, opened a boarding house near the University of Wisconsin so they could attend.  Kath graduated with a degree in education, Riley in engineering in 1905. Cope wasn't interested in college, he was a musician and wanted to be a Big Band leader.  Alice moved her family to Oak Park, Illinois and enrolled her youngest in school.  Riley found work and Cope was jobbing.  Kath taught in Madison and then moved to Iowa when she married.

Alice learned frugality back on the farm and how to get by, which stood her in good stead though out tough times in her life.  But, not just frugality, she was educated and loved to read.
Her granddaughter told me: "Grandma Harvey sewed so much 'making over and making do'  she had a  great gentle sense of humor--said her epitaph should read 'Let it rip!'   She had read all of Dickens by the time she was 12 years old."
She was known as the person in her generation who knew of the "good New England Stock" which they came from which included folks on the Mayflower and she joined the
D. A. R. when living in Madison.  Unfortunately, not all of the family history letters, etc. that folks say they sent to her are among the things that I have or have access to.

When her youngest child married Adelaide and Bobbie lived with her. Alice was helping Adelaide care for their two young daughters, when Alice had a cerebral hemorrhage and died at age 61 on 24 April 1921.  Alice outlived her husband by six years, lived to see all of her children married, lived to see six of her seven grandchildren born, and lived to see her son Cope first as a Big Band director and then to go off to World War 1, returning safely from France.  She was at Cope's wedding, he and Julie left on their honeymoon, and she died while they were gone.


Martha (Mattie) Elnora (Nora) Worthington Richardson (17 November 1865 - 25 April 1939) was born in Chicago and she was named for both of her grandmothers, Martha Searing Worthington and Elnora Esther DeLoss Cobb.  Her father, Robert, had moved from Albany, New York to a farm in Wisconsin with his father, Denison, after his mother, Martha, died. His father Robert went to the "big city" to for work.  Her mother, Elnora Esther, had come with her parents (Nathan and Elnora Esther) to Chicago from small towns near Rome, New York.  Robert S. Worthington was working in freight forwarding and his next door neighbor Nathan Cobb was running a planing mill.  Robert married Elnora Esther Cobb, the girl next door.  They had one child, little Mattie didn't have many children to play with, but since Robert was the oldest of 10 children, it was not unusual for Mattie to have an uncle living with them as each started out working in Chicago and providing entertainment at home.  The family was doing well enough to be building a house, nearby.

Life changed when Mattie was five in October of 1871 with the Great Chicago Fire. Originally it looked like it was far away, but it grew closer and they spent the night on the North Avenue Beach, where Mattie met Emmy Sharp, another little girl her age and size -- they became life-long friends as did their parents.  When her family rebuilt, it was out "in the country" and nearby to where the Sharps also built a home.  This "country village" was Oak Park, which became one of the fastest growing suburbs of Chicago, thanks to the Fire.  The box of china which melted together in the fire, was taken as a lump and put into the yard of the new home when they built.  As awful as the Chicago Fire was, it was fortuitous in that is why her future husband's family moved to Chicago to help with the rebuilding.

Her parents were very involved with the Episcopal Church, first in Chicago, then in the mission in Harlem, and then with the founding of Grace Church Episcopal in Oak Park. Mattie was very proud that she knew the general confession backwards and would hit the middle word exactly when the priest did.

Mattie married Harry Bogart Richardson on 5 December 1889; and once married, started calling herself Nora [her mother Elnora Esther was still alive and her grandmother Elnora Esther had just died, so "Elnora" would be confusing, I suspect].  Nora and Harry had two boys:  Robert (Bobbie) Worthington Richardson (born 18 October 1890) and Harold Bogart (born 21 April 1894).  Harry worked downtown Chicago for his father's insurance agency or a local bank selling stocks and bond and insurance -- except for a couple of years --SURPRISE-- when he was in the Secret Service, one chasing counterfeiters in Denver. Nora was busy raising her boys and at one time traveling occasionally to see her husband who took the job out of financial necessity, then having Bobbie live in Denver with her husband and Harold with her in Oak Park..

Nora grew up in a household with her father quoting the classic poets, she loved learning.  As an adult, she never went to college but she was always furthering her education or volunteering for charities in the community.  She joined the XIXth Century Club, went to their meetings initially to learn and years later became one of the entertaining speakers there and at the Grace Episcopal Church mentioned in the newspaper.  She would study the issues, and so when she and her husband had a difference of opinion on the presidential candidates, there were "dueling" posters in the front parlor windows of the house in 1928.

In her final years, times were tough, her husband had died, as had her son Harold.  She did not have much income beyond the rent from next door.  She was hired by the W.P.A. [Works Progress Administration set up during the Great Depression to put local unemployed folks to work in their communities].  Six people were hired hired to help catalog and research the history of the town of Oak Park -- a perfect job for her.  She knew the town when it was a few hundred people and saw it grow into the thousands, she knew how to research, and how to write.  In 1937, the Historical Survey of Oak Park Illinois was published -- many of the chapters are authored by her [her initials appear on them] and the "Local History Index" became available in the Public Library.  The book is still being used by the Librarians when someone comes to the desk asking about the History of Oak Park!

Nora died on 25 April 1939 at the age of 73 from chronic myocarditis with emaciation and exhaustion contributing factors.  She outlived her husband and one son.  But she did live to see her oldest granddaughter start medical school and her youngest start college.  She must have been so proud of their education opportunities that she probably wished she had had.

Nora and Alice knew each other -- they met through their children who married, Bobbie and Adelaide.  Clearly they were also friends.   When Alice died in 1921, it was Nora who wrote the obituary in Oak Leaves, the local paper.

Alice Copeland, wife of the late Joseph E. Harvey, entered into rest on Sunday, April 24, after a brief illness.  Mrs. Harvey was born in  Jefferson, Wis., her married life being spend in Lake Mills and Madison, Wis., before coming to Oak Park about fifteen years ago.  She was essentially a home-maker, a woman of unusual charm and fine mentality, who lived a life of unselfish service to others.  A keen sense of humor carried her over many of the rough places of life, and her beautiful serenity of expression showed the power within.
Mrs. Harvey was a member of the Oak Park D.A.R., having a fine ancestry of which she was justly proud.  Her four children--Mrs. Alfred Rhodes of Esterville, Iowa; William Riley Harvey of Rogers Park; Charles Copeland Harvey, and Mrs. Robert W. Richardson of Oak Park, are left with the blessed memories of an unusually beautiful life of devotion to others, cheerfully given.
Funeral services were held on Wednesday, with burial at Lake Mills, beside her husband.
The one who sends this brief tribute feels that it has been a privilege to have known Mrs. Harvey, and that she has been enriched by having been one of her friends.


The stories here are quite condensed from the last 200 pages devoted to these two women's lives in my book Remember the Women! Heading up the Branches of our Women's Family Tree, Part 2.
Enjoy.


©2018, Erica Dakin Voolich
The link to this post is http://genea-adventures.blogspot.com/2018/01/remember-women-as-we-climb-family-tree_29.html