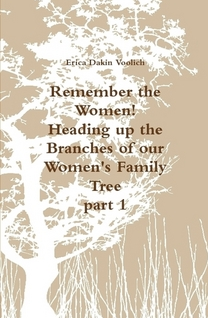 If you have been doing family history and have tried to trace your family name, you might been thrilled to have the "XX Family History" or "The Descendants of XX" book.  I know I was when I first started out and discovered the DAKIN history "was all in" the Descendants of THOMAS DAKIN of Concord, Mass. Compiled by Albert H. Dakin (Tuttle Publishing, 1948).  Albert spent many years sending out letters to folks all over the United States trying to trace all the descendants of Thomas who was in Concord, Massachusetts selling land in the 1650s.  He made an effort to include the names of the women who the Dakins married and when possible included their parents' names.  This is not always the case. The Dakin family descendants were lucky to have that information.  Sometimes, when tracing a family, the records only give the first name of the woman and don't identify their parents.  The DAKIN descendants were also lucky when  Elizabeth H. Dakin took the women in the first few generations and traced their families back in her The DAKIN FAMILY from THOMAS of Concord to THOMAS of Digby Including the Families of Their Wives (Plainville MA, 2008).

In my own research, I have moved beyond just looking for the names and dates of my ancestors, to also including some of their stories as you probably know just from reading this blog, if not from my genealogy books [shown on the right in this blog].  I have decided to focus on the stories and the genealogy of the women in my family.  This year I am starting with my grandmothers' generation.  Next year, will be the women in my great grandmothers' generation.  I will research not only the direct ancestors, but also interesting sisters who I have been able to include.

Adelaide (Addie) Copeland Harvey married Robert (Bobbie) Worthington Richardson.  He always wanted a beautiful woman by his side; and as a young woman, Addie was beautiful.  A part of Bobbie's job with magazines involved entertaining the stars who came to town to be photographed and interviewed.  Tragically, Adelaide developed a skin infection that left open sores all over her body for decades.  Then she was blinded in one eye and partially in the other from cataract operations, as a young woman.

As their children grew,  Bobbie was "looking elsewhere," and when their two daughters were starting their own families, he started another family himself.  Then tragically for his new children, Bobbie and his new wife died.

Addie was a divorcee, legally blind, scarred by sores, and suffering from asthma.  How did she manage to survive in the world?

When they married, she started a life moving around the state as he moved from one engineering project to another until he died tragically.  One week in December 1918, Marion's mother, husband and youngest son, died in the Flu Pandemic.  Marion needed to figure out how to support herself and her two-year-old son, Teddy.

Marion became the first Extension Nutritionist for the State of Connecticut.  If something was related to nutrition in Connecticut from 1921 until she retired in 1946, she was probably involved in it. For example, during the Depression and the WW2 Rationing, she was helping people cook with the available foods.  She was giving talks and writing farm bulletins and serving on committees.


Clarice Evans started out as an elementary teacher in Connecticut.  She took classes at the State Normal School in Danbury and eventually earned two degrees from Columbia Teachers College.

Since it took me 400 pages to report on what I found on these three women in Remember the Women,  Heading up the Branches of our Women's Family Tree, part 1,  I can not begin to describe everything here.  Basically, we have three women born in the late 1800s, who came into adulthood in the early 1900s: one a divorcee, one a widow, one never married.  All managed to find their way through the challenges of the 20th century.  Enjoy.