A Life Re-Routed thanks to the 1918 Pandemic

Marion Evans was born in Sherman Connecticut 11 February 1886, the 2nd daughter of Charles Harold Evans and Caroline Matilda Helsten.  Her father Charles and her uncle Edward had built houses next door to each other, at the foot of Evans Hill Rd. where their parents, Charles Evans and Hannah Elizabeth Radford lived on the top.  On the other side of that same hill in Gaylordsville, lived Marion's maternal grandparents, Eric Adolf Helstein and Mary Hearty.

Charles and Edward had a busy house construction business in Sherman and Gaylordsville.  In 1888, they decided to move their families and their business north to Great Barrington, Massachusetts where there was a building boom going on.  Charles and Edward Evans opened the Barrington Building Co. which ended up building not only houses but also a high school their daughters attended and other large buildings around the community over the years.

Neither Charles, nor his wife Caroline had any college education.  They might have attended high school but I don't know.  It is clear that education was important to them: Caroline was involved with the Current Events Club and Charles with the Sons of the American Revolution in Great Barrington.  Charles' mother, Hannah Elizabeth Radford Evans, amazingly had one year of college back in 1844-1845.  Caroline's immigrant parents -- Eric Adolf Helsten and Mary Hearty-- came in the mid-1840s and did encourage at least one of their 4 children (Sarah) to have education beyond high school.

Both Marion (1904) and her older sister, Clarice (1902), graduated from Searles High School.  Clarice taught in local schools before going on and getting degrees and eventually teaching at Jersey City State Teachers College in New Jersey starting in 1937.

As young unmarried women in the early 1900s, they needed to have jobs.  One might live at home, but unless you had wealthy parents, you needed to support yourself.   Both Marion and Clarice were in school at the same time, each graduating in 1908 -- Marion from Pratt Institute in Brooklyn New York with a degree in Domestic Science; Clarice from Connecticut's State Normal Training School in Danbury with a teaching certificate-- each with a two-year degree.

Marion's first job out of college was teaching high school domestic science in Saginaw Michigan.  Then she came back east and took courses at Columbia Teachers College for 2 years.    Her skills caught the attention of the philanthropist Helen Gould (daughter of Jay Gould) who hired her teach nutritional cooking classes for women in Roxbury New York during the summer of 1912.  She worked for Helen Gould all year, helping with setting up a new organization's chapter, the Campfire Girls, in Irvington New York and typing a book of sermons for a minister there.  When not working, she would be back home in Gaylordsville Connecticut.  Her parents were now living in her Helsten-grandparents' former home just over the Housatonic River from Robert Edward Dakin who was back at his parents' home working on the Bulls Bridge Power Plant addition.

Marion and Robert Married on 13 September 1913 in Gaylordsville.  Rob was and engineer working projects around the state.  So, they would set up house-keeping and when the job required that they move, they did.  So they had three children born in three different towns. Robert Edward Jr was born in Danbury on 15 May 1915, dying the next day.  Theodore Robert was born in New Haven on 11 November 1916.  Edward Evans was born in Derby on 28 January 1918.  In August 1918 the family had moved again, this time back to Danbury so Rob could work on the dam at Stevenson over the Housatonic River.

Marion's busy daily life with children and running the household was abruptly disrupted by the flu pandemic that was sweeping all over the world.  On Saturday 30 November, Rob got sick.  Marion had two young children -- a two year old and a 10 month old along with a sick husband.  She sends her older child to stay with Aunt Mary in Gaylordsville and her mother Carrie Helsten Evans comes down to help.  By Wednesday 4 December, her son Edward was sick, as was her mother Carrie.  On Tuesday 10 December, her mother Carrie dies, the next day, her son Edward Evans died and on Thursday there was a double funeral.  The next Monday, her husband Rob died.  So, in 5 days, Marion lost her mother, son and husband to the flu -- she was now a 32 year old widow with a two year old son -- her life had dramatically changed.

She initially moved back to her father's home to decide what to do; he had lost his wife, son-in-law and grandson with all those deaths but they had no time to grieve.  Marion needed to go back to work, she had a son to raise.  What to do next?   In 1918 there wasn't social security for a widow raising a child.  Luckily she already had some education to build upon.  Probably not true for many other families who were devastated by the Influenza Pandemic.

Marion decided to go to the University of Chicago for courses in nutrition during the 1919 spring  term with her father going along as "baby tender" -- so Marion, son Ted and her father Charles traveled from Connecticut to Chicago and moved in with her sister Clarice who was teaching industrial arts at the Laboratory School there.

After a quarter at U of C, Marion was hired at her alma mater, Pratt Institute, to teach home economics.  Off they all go to Brooklyn New York -- Marion taught at Pratt for two years before being hired by Connecticut Agricultural College (now U Connecticut) as Connecticut's first Extension Nutritionist in February 1921.  She retired from U Conn in July 1946.  Her son Ted grew up on the Storrs campus with students who would trade child care for room & board.

In her job, she was writing extension bulletins on food preparation and also giving talks to local groups and large Expositions and State & County fairs all over the state of Connecticut. 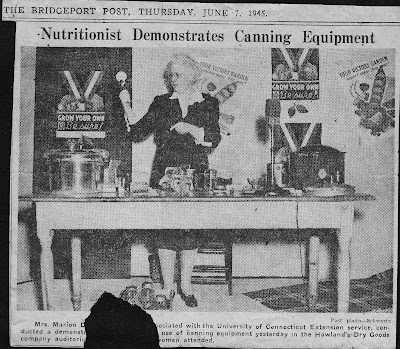 You already know she had taken many courses and many different schools.  She decided to take a leave of absence for a semester and enrolled as a student in the college where she was on the faculty and completed her bachelors degree in teacher training in home economics -- graduating from Connecticut Agricultural College on 9 June 1930.

When her father Charles died in 1928 in Savannah Georgia on a train home from Florida to New York, one of the obituaries listed his three surviving children and Marion was listed as the wife of a professor at Connecticut Agricultural College!!  Her husband had died ten years earlier, SHE was on the faculty, he NEVER was!

Years after she died, in 1974, the university decided to honor the "pioneer women educators" with a plaque and garden outside Holcolm Hall.  Ion 22 October 1991, went to the dedication as did Wilma Keyes, the only survivor of the honorees.

"The women were faculty members of the  School of Home Economics who lived and taught in Holcomb Hall.  Built in  1922, Holcomb Hall replaced the first women's building, Grove Cottage,  which burned in 1919.
Memorialized for their pioneering efforts to educate UConn women  are:  M. Estella Sprague, Marion Dakin, Gladys Hendrickson, Wilma Keyes,  Lillis Knappenberger, Marie Lundberg, Lisbeth Macdonald, Edith Mason,  Elizabeth Putnam, and Elsie Trabue.  All taught in what was then the  school of Home Economics and is now the School of Family Studies.  Keyes is the only one of the ten still living.  Her art and design courses led  to the establishment of the University's present department of Art in the School of Fine Arts.
The Pioneer Women Educators Memorial is a gift of three UConn women...
'These women were part of the progressive wave who were seeking to  carve out new opportunities and careers for educated women,... Home  Economics was one of the new areas and these pioneers  taught our generations of women to reach beyond the accepted roles of teacher, nurse and librarian.'
"Martha Fowlkes, Dean of UConn's School of Family Studies, comments:  'Our School is proud and grateful beneficiary of the contributions of the  women educators in whose honor the garden is dedicated.  Through their  accomplishments in the field of Home Economics, these women represent  both the University's history of women's educational achievement and its  attention to the importance and dignity of families and the lives of  women, both inside and outside the home..."

There was irony of the picture of Marion at the top of this page.  She is sitting in the wagon, the mode of transportation around Sherman and Gaylordsville.  Soon after the picture, she married and her husband was an engineer who needed to travel around the state.  So, by the time he died, he was driving a car.  After he died and she took the job as the first Extention Nutritionist in Connecticut, in 1921 she was driving around the state to make presentations.   By the time she died, she & Ted had not only taken a boat to England to visit her sister in 1929, and then before she died she had traveled by plane to Sweden and then Japan.  To top it all off, she even watched the landing of man on the moon in 1969. Could she have even imagined the changes in transportation in her lifetime when sitting in that family wagon.

More details on the life of Marion Evans Dakin (11 February 1886-4 July 1974) are included in my article that was published in TIARA Newsletter, 2 September 2015, vol. 32, no 3.   TIARA (The Irish Ancestral Research Association) had a focus issue on Researching the Lives of Women. 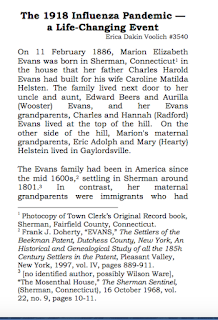