Letters from Home during the Great Famine in Ireland


Mary Hearty was born in March 1823 in Parish Creggan, Townland Dorsey, County Armagh, Ireland.  She immigrated to Haviland Hollow New York in 1848 and married a Swedish immigrant, Eric Adolf Helsten in 1849.
After her granddaughter, Marion Evans Dakin died in 1974, two letters from Mary's father, Owen, were found in the family desk.  The two letters along with Mary and Eric's wedding certificate are the only family artifacts we have about Mary's family back home.

I have found her father Owen Hearty, in the 1828 Tithe Applotment in Dorsey as a small tenant farmer with 4 acres, 2 roods and 12 perches (a bit less than 5 acres)-- not exactly a large farm to support a family in good times, let alone the bad ones.  The letters mention a sister, Betty, and some cousins (Peter Garvey in Youngstown OH, Ellen Mooney in Syracuse NY,  Larggh Hearty in Philadelphia PA, and Frances Hearty in USA) but no mother.  I do not have a name for her mother.

Mary Hearty married Eric Adolf Helsten on 12 August 1849, shortly after the first letter was sent from  Ireland.  She has probably been working as a maid for Benjamin Cowl in Haviland Hollow and Eric has probably been working in Cowl's tannery in Haviland Hollow.  Times as tough back home, the potato crop has failed, please send money to help her sister Betty come to USA.

Mary received one more letter from her father, Owen, dated 24 January 1851.  This is much longer, has some news from people back home who have come to the USA, still appealing for money. 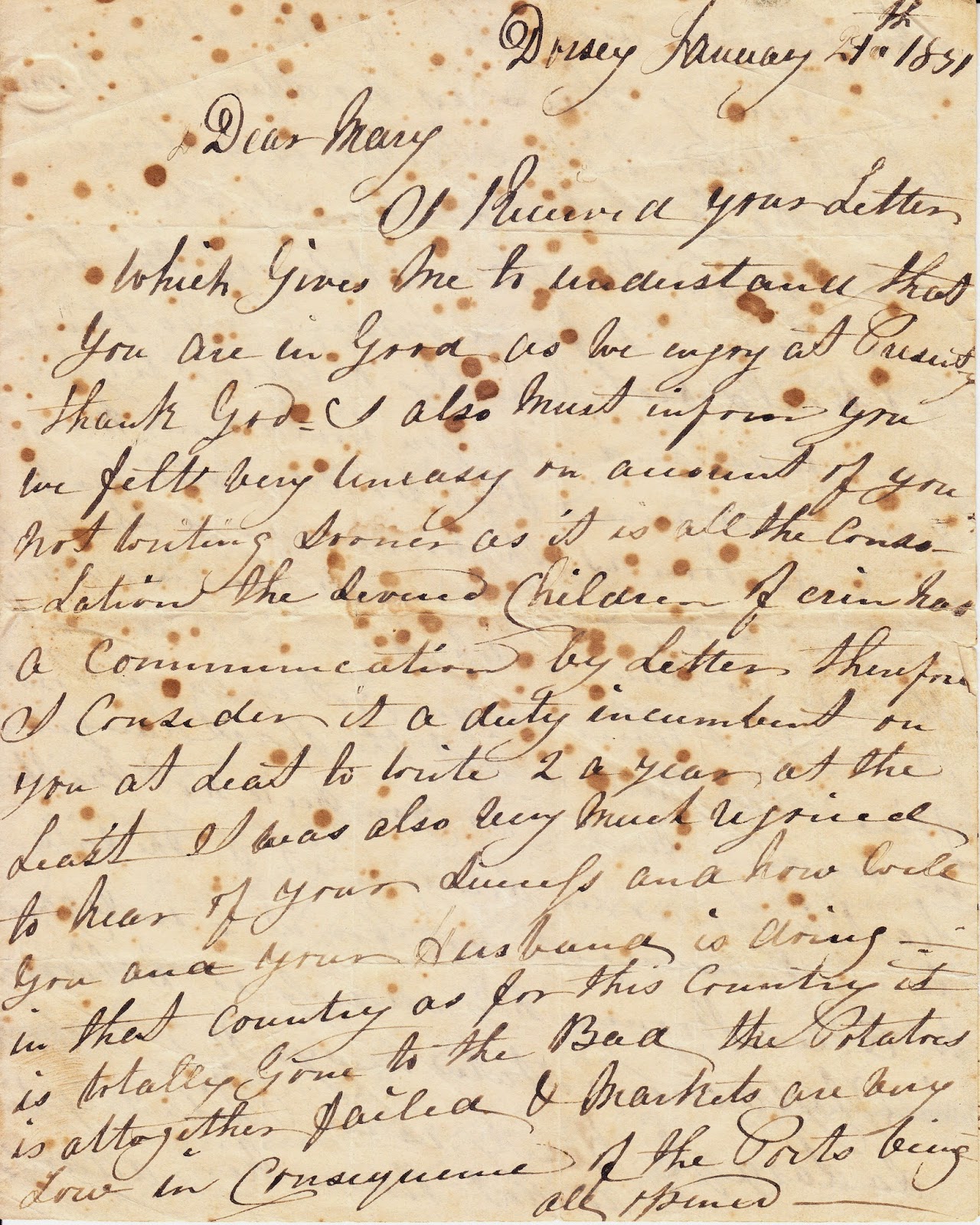 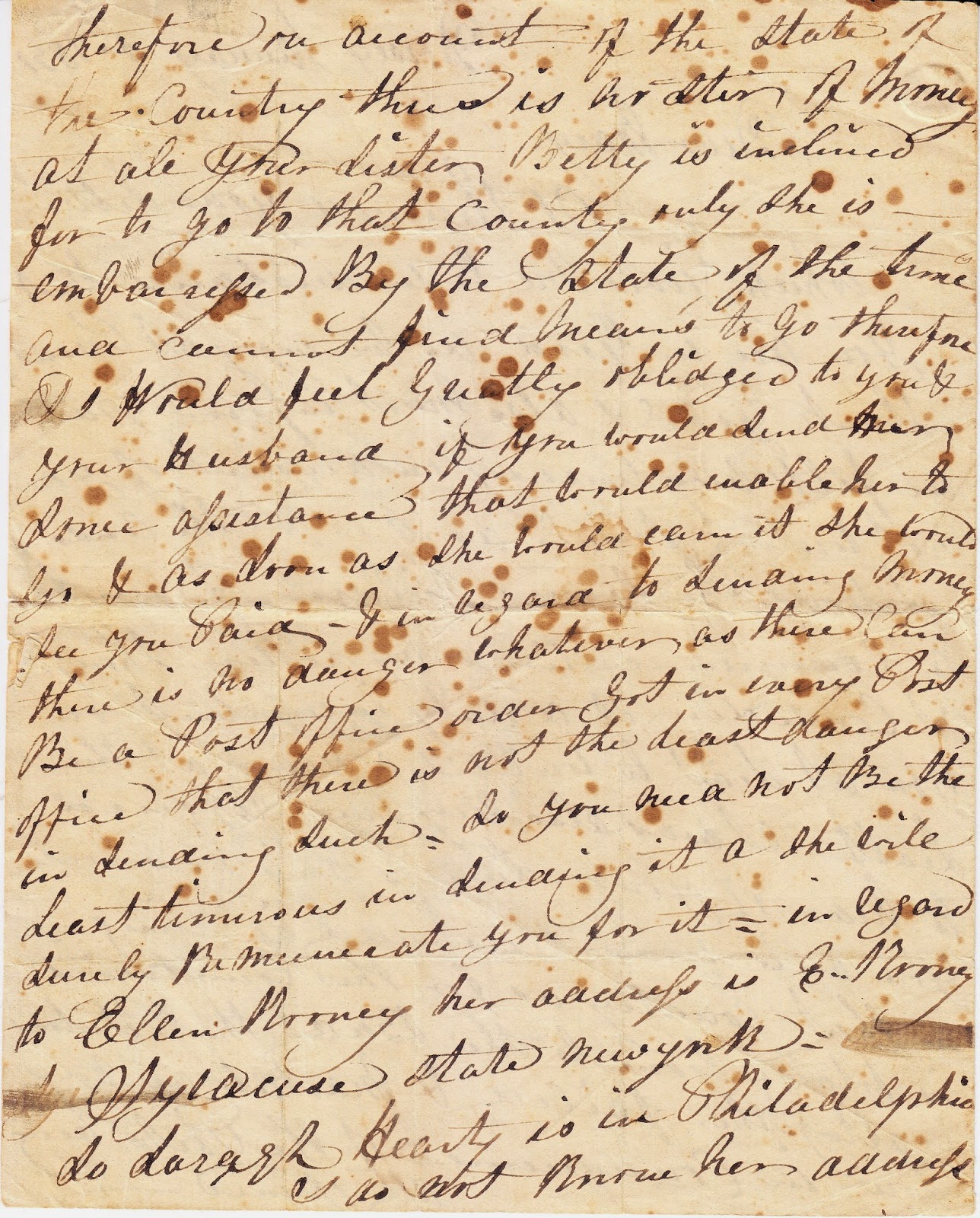 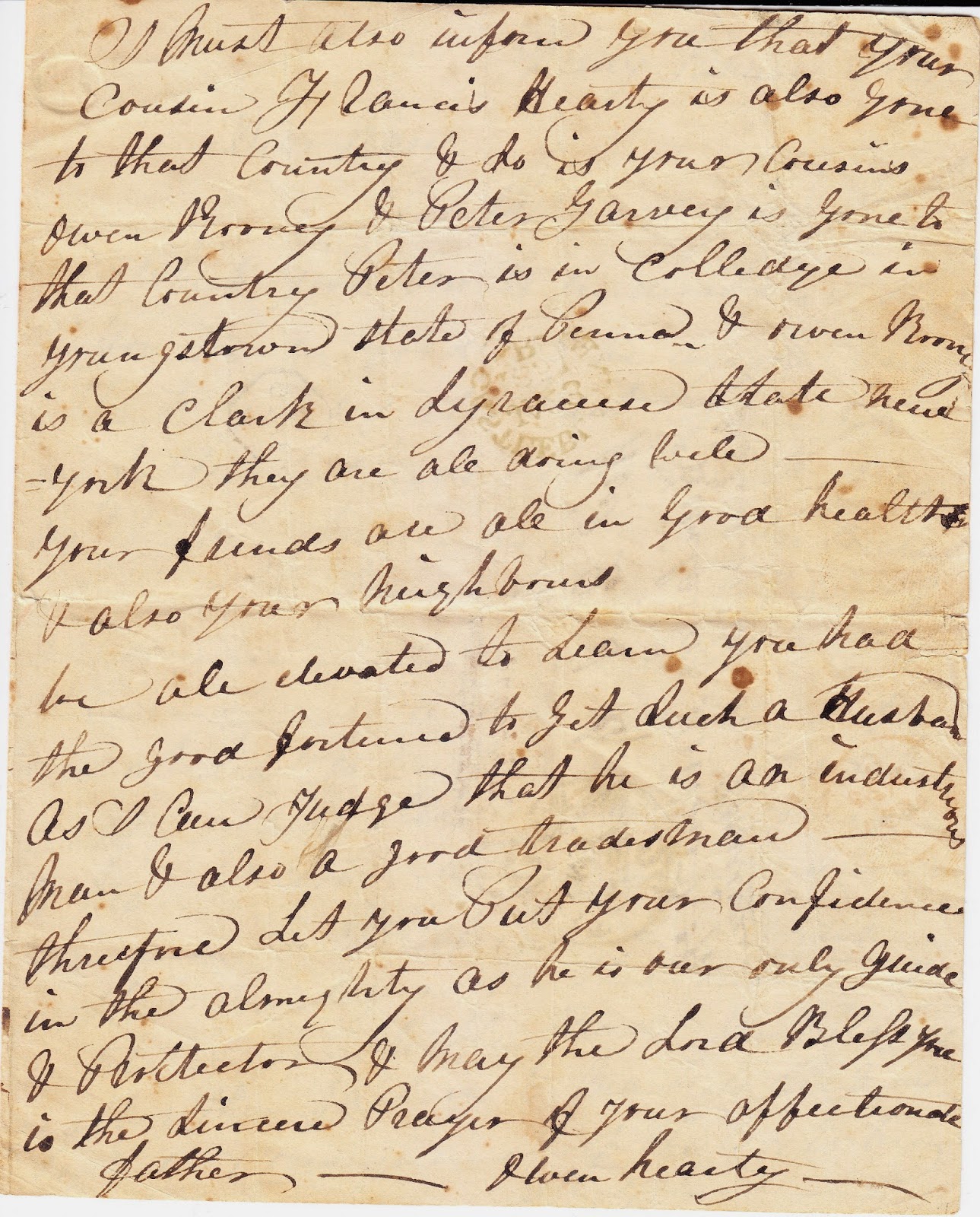 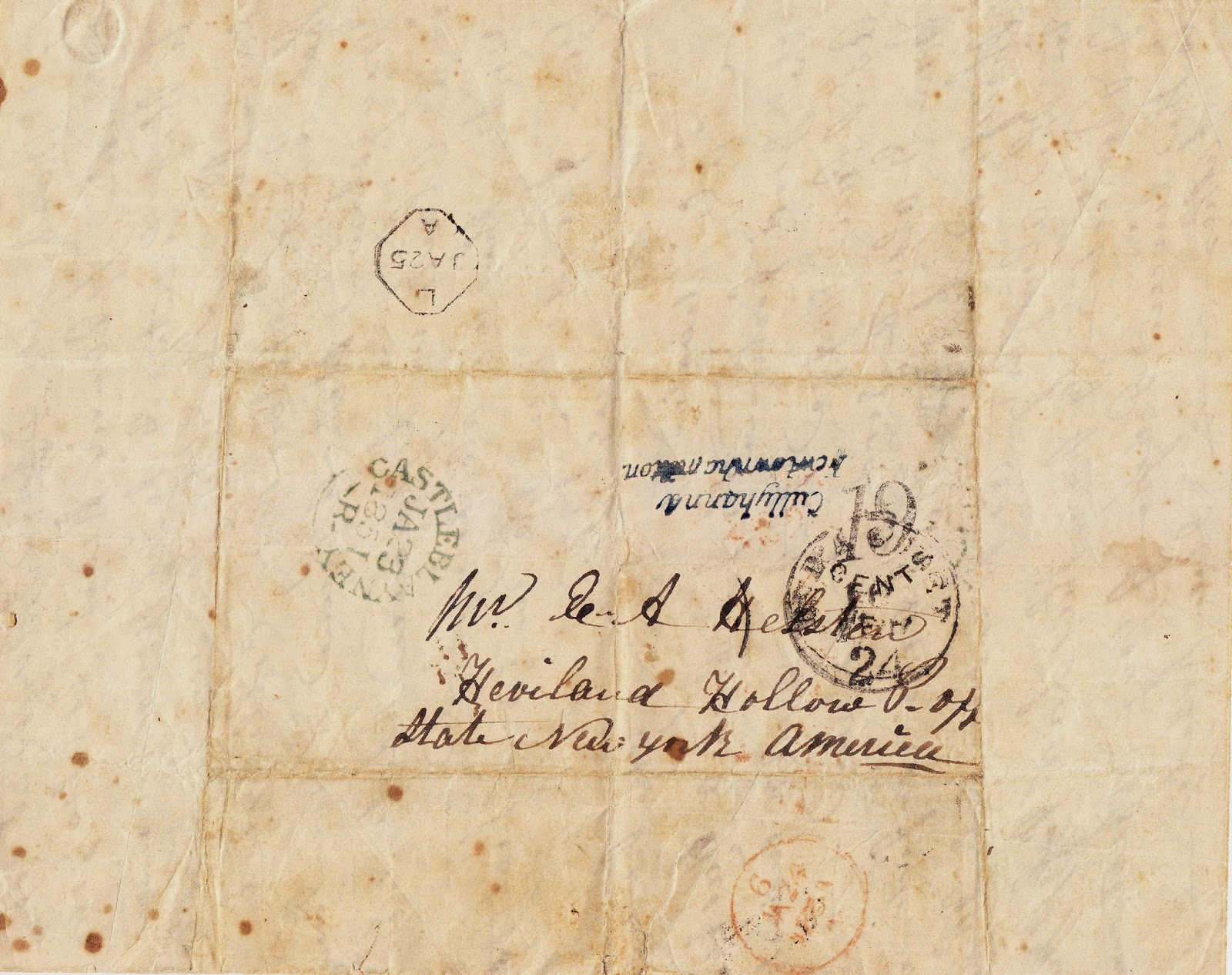 Dorsey January 24th 1851
Dear Mary
I received your Letter
which gives me to understand that
you are in Good as we enjoy at Present
thank God = I also must inform you
we felt very uneasy on account of you
not writing Sooner as it is all the Conso-
Lation the devised Children of erin has
a communication by Letter therefore
I consider it a duty incumbent on
you at Least to write 2 a year at ther
Least I was also very much rejoiced
to hear of  your success and how luck
you and your Husband is doing ---
in that country as for this country it
is totally Gone to the Bad the Potatoes
is altogether failed & Markets are very
Low in Consequences of the Ports being
all opened
therefore on account of the Stater of
the Country thus is condition of Money
at all your sister Betty is inclined
for to go to that County only she is
embarrysed By the State of the time
and cannot find means to go therefore
I Would feel Greatly oblidged to you &
your Husband if you would send money
some assistance that would enable her to
Go & as Soon as she would earn it She would
See you Paid -- & in regard to sending money
there is no danger whatever as there can
Be a Post office order got in every Post
office that there is not the Least danger
in sending such = Do you need not Be the
Least timerous in sending it a she will
Surely Renumerate you for it = in regard
to Ellen Mooney her address is E..Mooney
Syracuse State Newyork =
So Larggh Hearty is in Philadelphia
I do not Know her address
I must also inform you that  your
cousin Francis Hearty is also gone
to that country & is your cousins
Owen Rooney & Peter Garvey is gone to
that country Peter is in college in
Youngstown State of Penna. & owen Rooney
is a clark in Syracuse State new-
york they are all doing well ---
your friends are all in good health
& also your neighbors
be all elevated to Learn you had
the good fortune to get such a Husband
as I can Judge that he is an industrious
man & also a good tradesman ---
therefore Let  you Put your Confidence
in the almighty as he is our only guide
& Protector & May the Lord Bless You
is the Sincere Prayer of your affectionate
father ---- Owen hearty ---

He has news, but also is appealing 2 letters/year from her and for funds for Betty to come.  He clearly has gotten a letter from Mary telling her father of her marriage to Eric.  Clearly, Owen has hope that his daughter will be able to send funds, but life in the USA was not all "milk and honey" as imagined and she didn't have the money to send home at that time, according to the draft of the next letter.
We have no further letters from Owen Hearty to his daughter Mary Hearty Helsten.   The last piece of tangible information about Owen Hearty is that letter in 1851 to his daughter.  He is not listed as living in Dorsey in the Griffith's Valuation of 1864.  There is an Owen Hearty in the next town over -- whether it is the same person is to be determined.  In the Griffith's Valuation in Dorsey there is a Patrick Hearty and in the Cancelation Books in PRONI written in "()" is the word "Owen" --
Patrick Hearty (Owen).
Not sure what that actually means.  Maybe Patrick was the tenant and Owen lived with him (just a guess).

We do have the notes for a draft of a letter, probably to Betty, Mary's sister, written by Eric some time after they have bought the tannery in Gaylordsville in July 1852.  Eric is no longer an employee, but now an indebted employer.

Dear Sister Elizabeth!   We have received
your letter which gives us the satisfaction that you
are in good health and have a good place where
you be also gave us to understand thatt you are
fully determined to go to America but have not the
strength on own expense to do so.  We think that if you
only was here you could do well butt how come i do nott know.
My situation is greatill different these year to whatt is was
last year.  Last year i did hire out and earnd money every day
and had money out on interest, but last spring
I took it all up and hired a tanyeard, about seven
milles from where i lived thern, and began on own hand
to work, laid out all the money had in hides skins and bark for so
stach my yeard and there is did not have enough i had to
borrow more money all i could get for i found out i had to lay out money
every day.  Tanning is a very slow buiseyness and it take
a great while before the money comes balk again.  I feel
sorrow to say thatt i could not give you any money for
your assistance but i ask you to not blame us for my situation
are so that i could not and my bussiness require money
allwhile and i have nothing more then what i have
worked very hard for since i com to America and it seems
to me as i could make more money when i  worked as
Journeyman than i can now and beside that i have to now more
risk of loses among those Yankys now than before.  I ask you now
to be of a contented mind and save all you can if may perhaps be som oppening
for you in the future. If you could come we  would be very
glade to see you here and do what we can for you
then.  You know that your sister had to work for all that
brought her here before she started and so did i too.  i had
to work for years befor i could get enough together to bring me
YoJ received Fathers letter great while ago and also yours but you
must excuse me for we had not wrought Sooner my time has been
taken up very much all while and my wife could not write
it because she never leand it

This letter was not signed and not sent since it was with Eric and Mary's papers in the desk -- maybe copied and mailed to Mary's sister Betty.
Eric does offer to help her if she can get herself to Connecticut.  He cannot afford to pay her passage.    Over the years Eric and Mary did help various nieces of his from Sweden when they came, many lived with them and got jobs in the neighborhood until out on their own. Eric also hired new Swedish immigrants in the family  business -- as apprentices when it was a tannery, and as assistants as the business evolved over the years.

In my effort to find any more information on the Hearty family of Dorsey, part of Creggan Parish, I corresponded with Kiernan McConville at the Creggan Historical Society.   I shared the above letters with him.  He was thrilled to see some letters from the Famine Years written by ordinary people from South Armagh, which he commented were very rare.  He asked to include them in an upcoming journal of their local historical society.

Well, that upcoming journal has arrived: 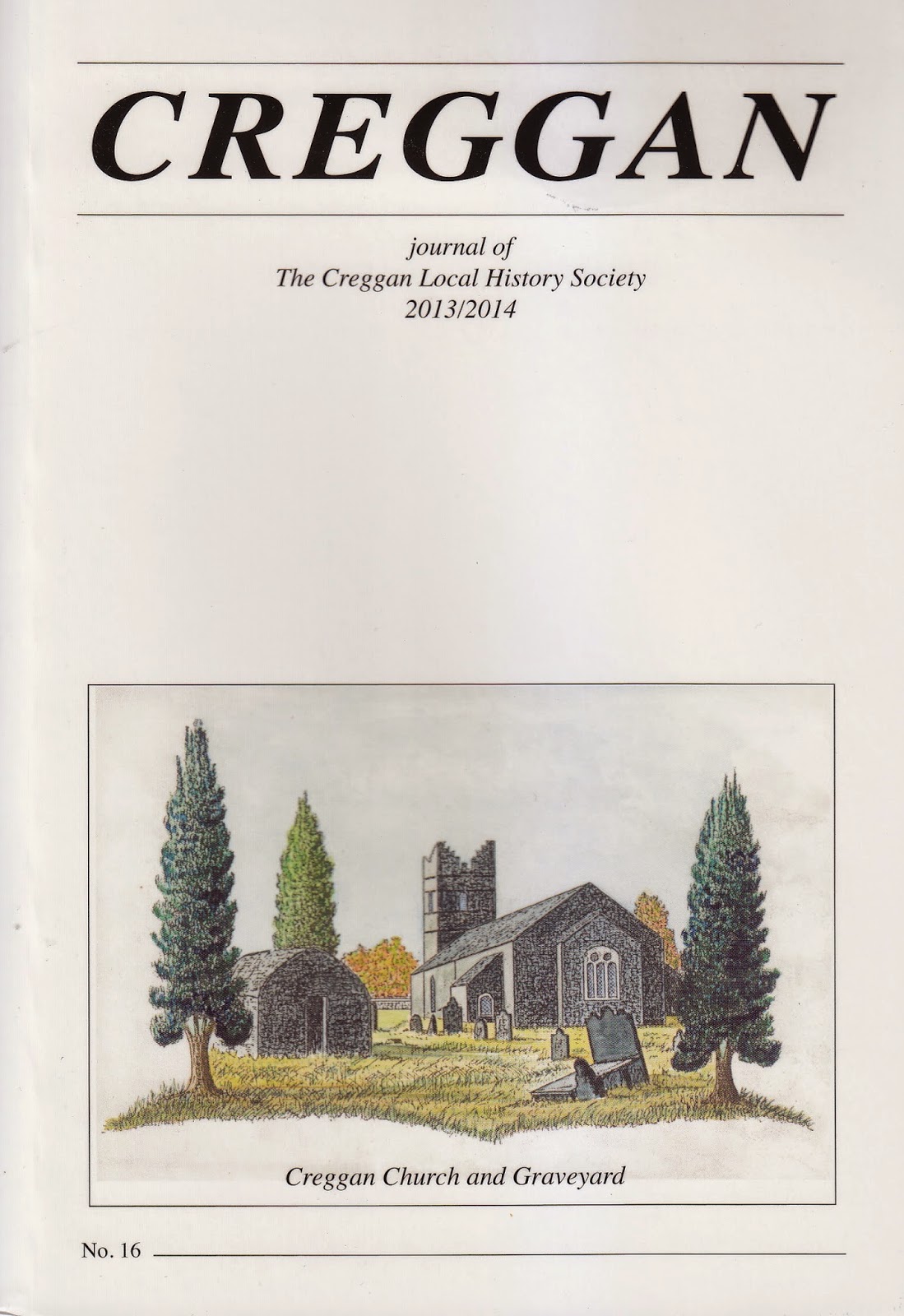 In the article, Kieran starts by putting the letters into context.  He describes the famine conditions, the cause and spread, and the ineffective efforts to relieve the famine.  He goes on to describe the migrations and death rate that devastated the Irish population.  He gives what background we know about the Hearty family and on Mary's family.  He mentions the hopes of sending a child abroad brought but in many times remained unfulfilled.  He ends with the transcription of the three letters.

I can only hope that maybe the descendants of Mary's family back in Ireland, survived and will see this article and/or blog and contact me.  If not, if the letters & article provide information for others whose ancestors came from Creggan Parish, then that is good also.

The link to this post is http://genea-adventures.blogspot.com/2014/11/letters-from-home-during-great-famine.html
2014©Erica Dakin Voolich