A Family Story, a Bit of Investigation and the "The Rest of the Story" 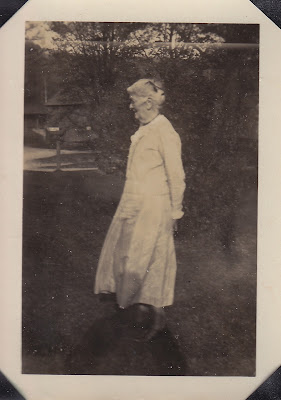 My mother used to tell the story about her mother-in-law's Aunt Mary:

Mary lived to be 92.  In her old age, her family became concerned about  her living alone on the family farm.  They insisted that she move in with her daughter-in-law.  Each day, Mary would get up, hitch up the horse and  wagon, ride up to her home, spend the day and then return at night to sleep at her daughter-in-law's home.  When she died, Marion Dakin, her niece, helped to clean out the house.  Marion found all of the "new  fangled" gifts--a toaster, an iron, etc.-- she had given her over the  years still in their original boxes.

Mary Louise Helsten was the oldest child of Eric Adolf Helsten and his wife Mary Hearty.  Mary L was born in Patterson New York on 7 June 1850, and the next year her family moved to Gaylordsville Connecticut where she grew up. In 1878, shortly before turning twenty-eight, she married a widower, Charles Pomeroy, who had a teenage son Henry.   Henry was the child of Charles Pomeroy and Josephine Hallock Pomeroy 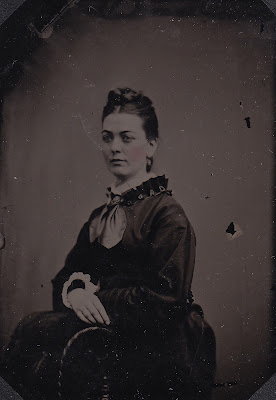 I was looking at Miriam J Robbins site to search for city directories.  She had some links for New Milford, Connecticut and I was working my way through the directories checking out various family names.  I started noticing the ads.  This half-page ad was run in the directories for 1884-5, 1888-9, 1891, 1897: 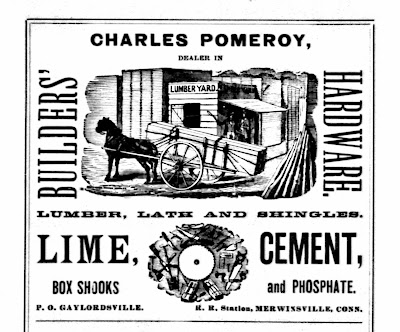 Looks like Charles Pomeroy was not only farming.  If you take a look at his farm.  Sure looks like it is also a lumber yard on the right: 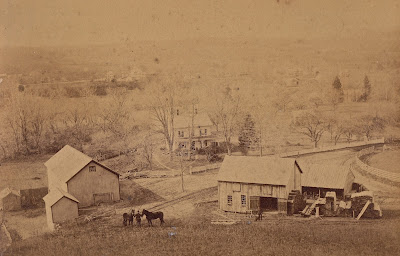 Not only does it look like both a farm and a lumberyard, but look between the buildings, set back, there is the house that Mary lived in with her husband Charles and, in her later years, would drive her horse and wagon to daily to spend her days in her latter  years. 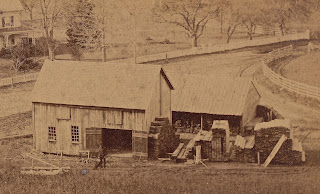 Charles Pomeroy died in 1903, and by 1902, he no longer had his large ad.  He was listed, instead, in small listings under the individual items sold, such as "FERTILIZERS" 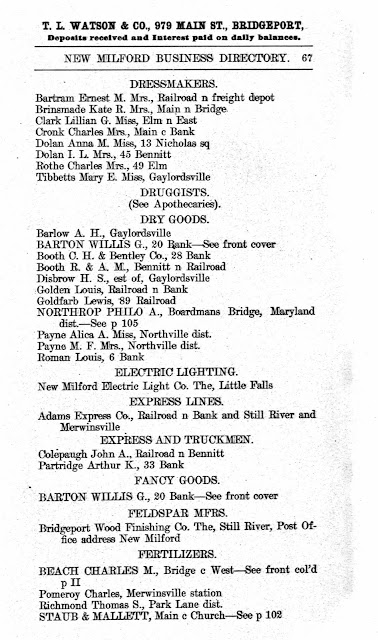 Now for the rest of the story.  What was Mary doing after her husband died?

Written out without abbreviations:
Pomerory Mary, widow of Charles, hardware and lumber [business] in Merwinsville near Gaylordsville, home ditto [she lived where she worked, a "home-based business" in today's lingo].

Looks like Mary was busy.  According to the small ads in that 1914  directory, she had listings under:
Hardware and Cutlery, Lumber, and Mason Materials.  Even if, in the address book section, she is "Mary, widow of Charles;" when listing 'Mary the businesswoman,' she was "Mrs. Charles Pomeroy" in the directory:

In 1914, she is sixty-four years old and clearly working at the family business that her husband started and ran in addition to the farm.

The next online directory I found for New Milford, was 1927.  Here she is listed as "Mary E wid Charles h Gaylordsville" and her grandson Charles, son of Henry is running the business.

In the 1930 census she and her daughter-in-law, Caroline Pomeroy (63), are living together in New Milford, they are each widows, she is the head of household at age 79. In 1940, she is still the head of household, now at age 89 she has her step-daughter-in-law Edna C Pomeroy (74) living with her in her own home, as she was in 1935.  She completed two years of high school according to the census.

In the 1930 census, the property listed right before Mary Pomeroy has Charles C Pomeroy, and it is listed as farm and lumber!  So, sometime before 1930, her grandson has taken over the family business.

One final thought.
I was looking at Charles Pomeroy's ad.  He is selling "Box Shooks."
"Shook" was a term that I wasn't familiar with.  So I looked it up in the Free Dictionary by  Farlex.
A shook:  "a disassembled barrel; the parts packed for storage or shipment"
Maybe you learned a new word today too!