A Family Legend and the Rest of the Story

In the 4-generation picture above, the baby is my mother, and the eldest gentleman is William Richardson.

In my mother's autobiography, written when she was in 8th grade, she said:

"... Long ago the Richardsons were great landholders in the north of Ireland.  After awhile they came to Canada and settled in Quebec.  One son went to Belleville, Ontario where he met a Miss Bogart, whose family had come from New York because they had been loyal to the king.  After the revolution the king gave them a grant of land near Belleville.  Richardson married Miss Bogart.  They had a large family, the youngest of it was my grandfather.  He grew up in a boy’s boarding school and came to Oak Park.  They had two boys, Robert and Harold.  Harold never married.  Robert married Adelaide Harvey and they had two children, Alice and Madelon. ..."


I found her autobiography in her papers after she died in 2001.  When I asked her about the Richardsons before I knew about the autobiography, she said they came from Belfast Northern Ireland to Canada.  Then the family came to Chicago after the Great Chicago Fire (1871) to help with the rebuilding of Chicago.  She said her great grandfather William Richardson worked for the Bank of Nova Scotia.  So that was the family legend I was starting with:  Belfast, Ireland to Québec, Canada to Belleville, Ontario to Chicago, Illinois in 1871 in two generations.  As an adult, telling me about the family, my mother named six children, her grandfather was actually child number two, not six.

I found the wedding of Robert Richardson and Sarah Allen, the parents of William Richardson in the Anglican Cathedral Holy Trinity Church in Québec on 25 May 1832.  William was born on 5 November 1835 in Québec City.  Robert was a cordwainer.  Sarah had four children before she died 28 January 1843, in Québec City.  Robert remarried, this time to Harriet Isabella Birch on 20 September 1843.  They had nine children.  Not all of his 13 children made it to adulthood.  In the 1851 and 1871 censuses, Robert says he was born in 1810 in Ireland.

I have not verified the "great landholders" or the "Northern Ireland." Robert did work as a cordwainer in Québec, he sounds like someone who is working for a living rather than managing an estate of some kind in Québec.  I have not found any passenger records bringing Robert to Québec -- so I don't know if he came as a young adult or as a child.  I haven't found any potential Richardson parents for him in Québec.  I have noticed there are many Richardsons in Northern Ireland, many of them named William Richardson and some own land.  Robert's first son was named William.  So, maybe that part of the story is true.  That is left to be investigated further.

Now on to part two of the family legend:   Robert had a son William who went to Belleville, Ontario, married a Loyalist, and then moved to Chicago after the Fire working for a bank helping in the rebuilding effort.

William married Mary A C Bogart, daughter and granddaughter of United Empire Loyalists who came to Canada from New York.  I found a newspaper birth announcement in Belleville Ontario for only one of their six children and this became a clue:  William Jr. was born 16 February 1862, baptized in Cobourg.  The newspaper identifies William Jr.'s father as employed by the Bank of Montreal -- not the Bank of Nova Scotia.

In 2005, I wrote to the Archives of the Bank of Montreal, hoping that they might have some records on their employees.  They did!

"William Richardson
Entered service at Québec in June 1854, was a Teller at Belleville (ON) in 1857.  Between 1859 and 1860 he held several positions at HO (Montréal) before becoming an Agent in Cobourg, St. Mary's, Waterloo, Goderich (all branches in the Province of Ontario).  In 1869, W. Richardson is Manager of our St. John (NB) branch, and in 1871 he is the Manager of our Chicago branch.  He resigned in 1876 when in office at Chicago."

Also in that letter were copies of two newspaper clippings about the Bank, the first was from an 1943 Belleville paper telling about the history of the 100 years of the Bank of Montreal in Belleville.  The other article was from a corporate newspaper, FIRSTBANK NEWS, September/October 1981, page 4, titled "Bank's Chicago office opened in 1861," by Freeman Clowery, Archivist. The article was an interesting history linking banking and the development and growth of Chicago's trade and transportation center.  One particularly interesting paragraph:

"At the time of the Great Chicago Fire, Bank of Montreal responded quickly, substantially supporting the disaster fund set up to aid sufferers.  Almost before the embers had cooled the Bank opened temporary quarters on Randolph Street, to help get commerce rolling again." 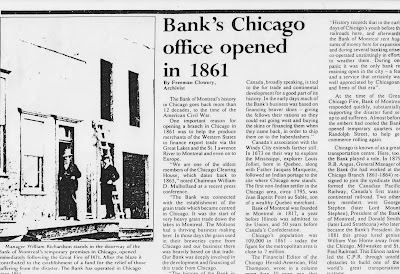 The article included a poor quality photo of the bank office after the Chicago Fire.  Fast forward to 2013.  I contacted the very nice archivist at the Bank of Montreal who I had corresponded with in 2005.  I inquired  whether they could scan the newspaper article so I could actually see a higher quality photo since it is supposed to be William Richardson in the doorway.  After a few inquiring e-mails back and forth, I received a scan of the original photograph, not the newspaper!

Not only does this confirm part of my mother's story about her great grandfather coming to Chicago to help with the rebuilding after the Fire, but it clearly shows the surrounding devastation and challenges in opening up a office for any business in October 1871.


©2013 Erica Dakin Voolich
The link to this post is http://genea-adventures.blogspot.com/2013/04/a-family-legend-and-rest-of-story.html
Posted by Erica at 5:00 PM